Please ensure Javascript is enabled for purposes of website accessibility
Free Article Join Over 1 Million Premium Members And Get More In-Depth Stock Guidance and Research
By Isaac Pino, CPA - Dec 14, 2014 at 11:00AM

Why GE's dividend hike failed to spark a rally in its stock.

General Electric ( GE 1.60% ) delivered an early holiday present to income investors on Friday: The company plans to raise its dividend by 5% in 2015, which will increase the quarterly payout from $0.22 to $0.23 per share starting in January. The move marks the fifth straight year in a row that GE has boosted its payout in December, and it's the seventh dividend increase overall since the fateful cut took place in 2009.

Here's a look at some of the finer details of the increased dividend for shareholders: 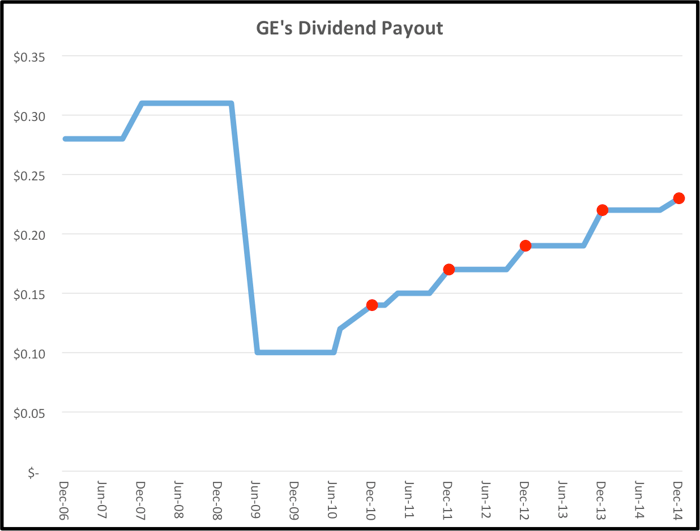 The announcement of a dividend increase was probably not much of a surprise to long-term investors. After all, GE's made a habit of raising its payout just before its annual outlook meeting, which is slated for this coming Tuesday, Dec. 16.

However, the reaction of the broader market might have caught a few shareholders off guard: GE's stock price dropped 2% during Friday's session, extending a month-long slump during which the stock has shed 6% of its value.

What gives? For starters, shares in GE have suffered an extended setback in part because of falling oil prices. As a barrel of oil tumbles toward $60 from more than $90 a few months ago, manufacturers with exposure to the energy industry are feeling the pinch. And GE, because of its large oil and gas equipment business, is one of those affected industrial companies.

Back in October, GE cut projections for future growth in its oil and gas business, noting that it was monitoring the sector with "caution." And on Friday, for perspective, crude oil prices declined 3.57% for West Texas intermediate, reaching $57.81 per barrel.

So while consumers are cheering the gas price declines at the pump, companies like GE are tempering their enthusiasm for investments in the formerly hot oil markets. And concerns about the near-term energy outlook might have caused GE to tighten its purse strings just a tad when it came to the dividend increase.

While Foolish investors rarely attempt to explain the short-term swings of a stock price, this recent trend is worthy of discussion because of the stark contrast it presents when compared with the end of 2013. GE, sitting in a similar position as far as earnings growth and cash on hand, raised its dividend by 12 cents a year ago, which helped bolster its share price by 5% during December alone. This year we're seeing a different story play out, and there's good reason to believe oil prices are at least partly to blame.

But if we take a step back, GE's 5% raise still comes in higher than the expected earnings growth for the year of 2%. This is a good sign that it's sticking to the promise that CEO Jeff Immelt made earlier this year to "continue to grow the dividend aligned with earnings."

And, as I've pointed out before, I think Immelt's made some sensible decisions in recent years when it comes to allocating capital. GE continues to please dividend-craving shareholders while reserving enough cash to invest appropriately in acquisitions that will fuel long-term growth. On the whole, this latest dividend announcement appears to be a continuation of smart cash management for this iconic American conglomerate.