Analysts and investors are hoping for a trough in demand for Deere & Company (NYSE:DE) in 2015. If it occurs, the stock will likely move higher. On the other hand, there are no guarantees that a bottom will form, and the downside risk is significant if conditions don't improve. I've already examined the bullish case for the stock; now it's time to look at the reasons Deere's stock could fall.

Deere & Company prepares for a difficult year, but risk is rising

Deere is preparing for a net sales decline of 15% in 2015. Indeed, management outlined the measures it's taking, such as inventory and receivables reductions, along with production cuts, to better align with future sales. Clearly, Deere is doing what it can to prepare for a tough year, but the downside risk is increasing.

For example, on the recent earnings call, Deere's manager of investor communications, Susan Karlix, outlined the following with regard to its sales forecast for next year: "In relation to our structure line, that would bring sales down to what we consider trough levels, with the division operating at less than 80% of normal volumes."

The division she is referring to is agriculture and turf, for which sales are forecast to drop 20% in 2015, and the 80% figure is significant because Deere is structured to produce at 80% to 120% of what management considers is its normal production.

The implication is that if Deere's sales come in worse than expected in 2015, then its margins could suffer significantly, because its cost base is set up for a larger volume of production. Risk is rising.

Competition could intensify in a falling market

Second, in a previous article, I covered how Deere was reducing its inventories to adjust for lower sales next year. This is a good thing to do, because if a company is carrying too much inventory, it will be under pressure to reduce prices to clear it. The good news is that Deere's inventory (as you can see in the linked article) is currently at 15% of next year's forecast sales -- a number similar to the two previous years.

However, two of its rivals in the agricultural machinery sector, AGCO Corporation (NYSE:AGCO) and CNH Industrial (NYSE:CNHI), currently hold 26% and 24.5%, respectively, of forecast sales in inventory. These figures are higher than in previous years and raise the possibility that they will cut prices to reduce inventory -- not good news for Deere.

AGCO Corporation's chief financial officer, Andrew Beck, on the earnings call in October, acknowledged that its inventory had risen because of declining sales: "AGCO's inventory position at the end of September was higher than a year ago due to increased inventory attributable to the transition to Tier 4 products, high replacement part inventories, and increases caused by declining sales."

Moreover, Chief Executive Officer Martin Richenhagen said the company will reduce inventory in the coming quarter. It's a similar story with CNH Industrial. Its CEO, Rich Tobin, said on the recent earnings call that "we've begun to take actions in 2014 to align cost structure and inventory positions to protect segmental margins in ag."

In other words, all three companies are looking to cut costs and reduce inventory. If sales turn down more than any of these companies expect, then there could be some intense price competition -- something for Deere investors to worry about, because Deere is predicting 2% price realization in 2015.

Market may not turn out as expected

Third, on the recent Deere earnings call, Director of Investor Relations Tony Huegel argued that "most analysts now expect U.S. corn farmers to reduce acreage somewhat next year. So if you assume smaller acreage [and] trend yield, that would be very supportive of both corn prices and would likely boost cash receipts." 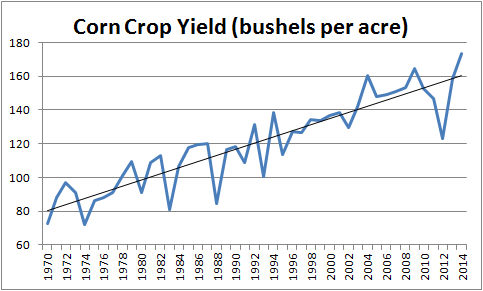 The inference is that any assumptions for trend yield may turn out to be an underestimate.

All told, it's going to be a difficult year for Deere. The company has given conservative-looking guidance, but the downside risk is rising as lower sales start to eat into its margins. Moreover, it's hard to predict what Deere's competitors will do, or what farmer behavior and crop yields will be like in 2015. If you really believe that crop prices will rise in 2016, then buying commodity futures might be a better way to invest.