T-Mobile (NASDAQ:TMUS) is often in the limelight, and this week was no different. At its latest Un-carrier 8.0 event, the company made two big announcements. First is the new Data Stash program that allows subscribers to rollover unused data for use at a later date. And second is the expansion of the company's LTE connections. 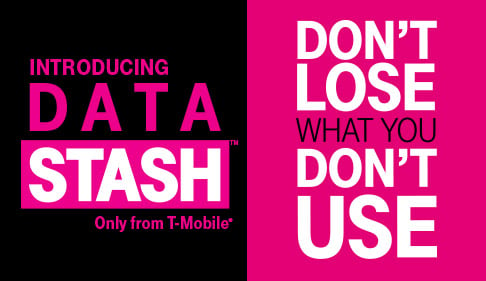 Just don't call it a "rollover" plan
For new and existing T-Mobile customers on a Simple Choice plan -- with three GB of 4G LTE data or more -- the company will start rolling over unused data so customers can tap into it up to 12 months later. The new program costs customers nothing and to sweeten the deal, T-Mobile is giving subscribers an additional 10 GB in their Data Stash to start with. Unlimited 4G LTE data plans naturally don't qualify..

As CNET pointed out, T-Mobile won't officially call the new program a "rollover" plan as AT&T owns the rights to that term.

The latest move comes just a week after T-Mobile lowered the price of its unlimited data plans to just $100 per month for two lines or four lines with 10 GB of data for the same price.

Don't miss this news
On top of Data Stash, T-Mobile expanded its LTE footprint by 10 million connections in the past 60 days. The company now covers 260 million points-of-presence, or POPs, beating its previous goal of 250 million by the end of 2014.

T-Mobile aims to reach 300 million people with its LTE in 2015, which would match AT&T's current coverage and fall just short of Verizon's 306 million.

In addition to the expanded coverage, the company also announced two other improvements. T-Mobile's Wideband LTE now covers 121 metropolitan areas. That's important for heavily congested areas like New York City, as the Wideband LTE can increase network speeds by up to 50%. The carrier's newly acquired 700 Mhz spectrum was also brought online in Cleveland, Colorado Springs, Minneapolis, and Washington, D.C. which should improve indoor coverage and expand existing network strength in those areas.

More than just the big carriers to fear
In the not-too-distant past, T-Mobile only had Verizon and AT&T to worry about -- Sprint (NYSE:S) was losing customers left and right as the company struggled with poor network connections. Recently however, Sprint has begun to improve its network with a new 4G LTE rollout, and the company also launched an aggressive offer to cut new customers' bills in half if they switch from Verizon or AT&T. So with its new LTE network, Sprint can offer a comparable $140 Verizon data plan for just $70 per month.

This means Sprint and T-Mobile are now engaged in both a pricing and network war with each other, trying to grab as many new customers as possible. T-Mobile's winning the fight right now, gaining 1.4 million net postpaid subsribers in Q3 while Sprint lost 336,000 postpaid customers.

T-Mobile's isn't in any danger from Sprint right now -- the Un-carrier's LTE network is still larger and faster. But this week's announcement of the Data Stash program (and network expansion) shows that T-Mobile is still intent on being the most disruptive force in the U.S. wireless industry. Branding itself as the underdog has worked well for the company, and Un-carrier 8.0 is proof that T-Mobile is not scared to go toe-to-toe with the larger carriers.