Please ensure Javascript is enabled for purposes of website accessibility
Log In Help Join The Motley Fool
Free Article Join Over 1 Million Premium Members And Get More In-Depth Stock Guidance and Research
By Sean Williams - Dec 20, 2014 at 11:41AM

Diabetes affects 29.1 million people in the United States, and is a dangerous long-term disease in its own right. This latest study, however, could add another aspect for diabetics to worry about.

Based on the latest statistics from the CDC, 29.1 million people in the U.S. now have diabetes, of which more than one in four is unaware they have the chronic disease. This is up from 26 million in the CDC's last update. Further, the number of people with prediabetes has ballooned to 86 million from 79 million. 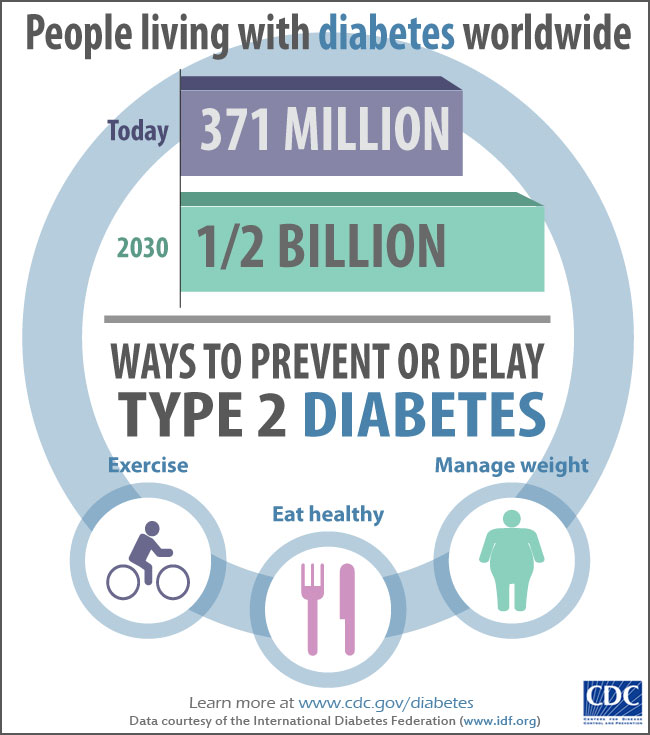 This is a genuine concern, as diabetes can lead to a number of complications, including kidney disease, nerve damage, and infections, to name a few. It's a disease that can often be managed, but which has no effective "cure" at the moment.

Diabetes comes in two forms: type 1 diabetes and type 2 diabetes. Type 1 is far less common, occurring in about 5%-10% of all diabetes cases. It's often referred to as childhood onset diabetes because the cells that produce insulin are destroyed due to a genetic malfunction. Type 1 diabetes is not preventable.

Type 2 diabetes, on the other hand, can develop at any age and is a result of your body being unable to figure out how to optimally use insulin. Type 2 diabetes can be prevented, or its progression dramatically slowed, by proper diet, exercise, and maintaining a healthy weight.

As you might have imagined, obesity is one of the greatest risk factors for the more common type 2 diabetes. With more than a third of U.S. adults considered obese, it's not all that surprising that diabetes diagnoses are on the rise.

Potentially scary news for diabetics
However, a frightening new study out of Australia demonstrates that steps may need to be taken sooner rather than later to help stem the rising tide of diabetes diagnoses.

According to an abstract published recently in the online journal Diabetes Care, patients with either type 1 or 2 diabetes have a higher incidence rate of cancer, and a higher death rate from cancer, than non-diabetics.

The study included close to 954,000 registrants, nearly 81,000 with type 1 diabetes and the remainder with type 2. Data on these registrants came from the National Diabetes Service Scheme in Australia, and was eventually linked to Australia's National Death Index. Finally, the data was cross-referenced with the Australian Cancer Database to determine what, if any, correlations existed between diabetics and cancer.

While age and obesity are known risk factors for cancer, the results imply a correlation between diabetes and cancer. And the incidence of cancer did not go up immediately following a diabetes diagnosis (assuming a thorough follow-up with a doctor) -- many of the registrants had follow-ups two years later and were discovered to have cancer.

Specifically, the study notes that cancers of the pancreas, kidney, liver, endometrium, thyroid, and gallbladder, and blood cancer chronic myeloid leukemia, were considerably more common in diabetics. Additionally, higher death rates were observed in diabetics in most cancer types, including pancreatic and liver cancer.

What's the cause for this surge in cancer diagnoses among diabetics? Researchers speculate it isn't insulin. Instead, they suggest that high blood sugar may be the contributing factor that leads to higher cancer incidence in diabetics.

Unfortunately, due to the size of study researchers were unable to explore to what extent smoking and obesity affected the diabetes-cancer link.

New pathways are needed
Most people by now are keenly aware that they need to eat right, exercise, and take care of their bodies if they want to improve their chances of living long, healthy lives.

But beyond these basics we need new and innovative treatments for diabetes. The good news is that, slowly but surely, we're seeing progress in this regard.

Last year saw the introduction of SGLT2 inhibitors, which provide a new pathway to treat type 2 diabetes. Instead of working in the pancreas or liver, SGLT2 inhibitors work out of the kidneys by blocking glucose absorption. This allows type 2 diabetics to excrete excess glucose through their urine to help control their blood sugar levels. Best of all, SGLT2 inhibitors were shown in clinical trials to cause weight loss, a great benefit for a largely overweight nation. Based on data from Johnson & Johnsons Q2 earnings presentation, Invokana and Farxiga together laid claim to about 30% of newly written type 2 diabetes prescriptions as of July 2014. All things considered that's pretty impressive, considering Invokana didn't even hit pharmacy shelves until April 2013, and Farxiga Feb. 2014.

MannKind's (MNKD 4.46%) inhaled diabetes drug Afrezza, which is due to be launched in the first quarter of 2015, is another potential game-changer worth watching. Targeted at both type 1 and type 2 diabetics, Afrezza eliminates the need for an injection, and could lead a revolution in convenience for diabetic medication delivery. Of course, there are still questions on pricing and whether or not diabetics will pay a premium for the convenience of not having to poke themselves with a needle.

Investors also shouldn't overlook the potential for a company like GW Pharmaceuticals (GWPH) to radically change the treatment landscape. GW Pharmaceuticals is predominantly in the clinical stage of the drug development process, and is utilizing cannabinoids from the cannabis plant to hopefully create drugs capable of delivering positive biologic change.

The one to watch here is GWP42004, a type 2 diabetes treatment currently in phase 2b studies. In its phase 2a results, reported in Nov. 2012, GW Pharmaceuticals' treatment led to a number of statistically significant results, including reduced fasting plasma glucose levels, improved pancreatic beta-cell function, and reduced systolic blood pressure. Marijuana has been postulated as a suitable control for diabetes, so it's an area certainly worth GW Pharmaceuticals further exploring.

Plenty of work left to be done
This study from Australia simply acts as a reminder to drug developers, investors, and consumers that there's a lot of work left to be done to make diabetes a potentially curable, or easily manageable, disease. Yes, that begins with healthier lifestyle habits, but it will also entail pharmaceutical companies developing innovative new drugs. I, for one, look forward to the day when drug developers get a grip on this currently chronic disease, and hope I get to see it happen during my lifetime.