Solar stocks have been beaten up since oil started to drop this summer and SolarCity (NASDAQ:SCTY.DL) hasn't been spared the drop. Shares are near their lowest point in a year and off nearly 40% from their all-time high. 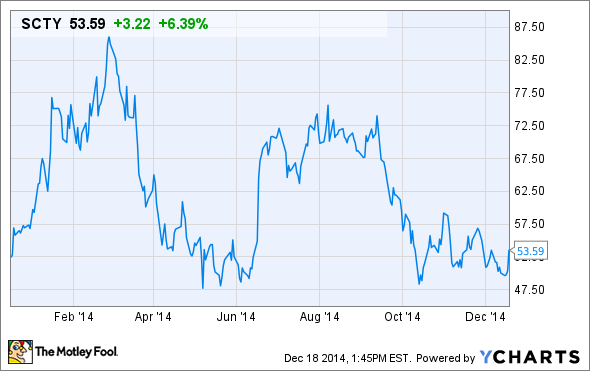 But just because a stock is down doesn't make it a bargain for investors. Let's take a look at what makes SolarCity attractive and where its risks lie.

The bullish argument for SolarCity
SolarCity bulls see a nearly limitless solar market in the U.S., where solar energy currently provides less than 1% of total electricity generation. SolarCity's goal of installing 1 million solar systems by mid-2018 seems to be just the start of the company's growth potential if the market develops as expected.

Already, SolarCity has built $4.1 billion in contracted payments, a 168,000 customer base, and $1.54 billion in contracted retained value. With costs per watt of $2.90, the company is becoming competitive with grid prices and should be able to transition well to a sales model as it introduces loans, still selling for a reasonable margin.

SolarCity also has a lot of innovation ahead. Energy storage is just starting to be an offering for consumers and the commercial market is growing as well. There's also the 1 GW Silevo factory currently under construction in New York, which could bring SolarCity's efficiency above competitors, giving it a long-term cost advantage.

The future seems bright, especially if everything continues along the status quo. But there are some big unknowns investors need to consider when buying into a stock like SolarCity.

Where SolarCity could slip
To me, there are two major risks for SolarCity in the near future. The first is that the macro solar market in the U.S. struggles, which is a distinct possibility in 2017 when the investment tax credit expires. This tax credit pays for 30% of the cost of solar installations and in the case of SolarCity's leases that's 30% off an estimated sale price of around $5 per watt, not SolarCity's cost of $3 per watt. This can pay for half of a system's installation costs through equity investors who buy these tax benefits.

If the tax credit expires as planned, SolarCity will be faced with a choice of either lowering sale/lease prices and margins will suffer or they can install fewer systems at a higher margin. Neither is attractive but given the growth SolarCity has already had, I think it will take smaller margins to keep its crews busy. Generating value of $2 per watt will be a thing of the past.

The other risk is competition. Until recently, SolarCity has been able to grow almost unfettered in the residential solar industry because its competition was small, regional installers. That's changing and Vivint Solar (NYSE:VSLR), which was formed just over two years ago, is already the second largest residential solar company in the country, showing that SolarCity's competitive moat isn't all that wide. SunPower (NASDAQ:SPWR) is also going all-in on residential solar, adding energy management and storage to its product portfolio.

The combination of the pending expiration of tax incentives and increasing competition are very real threats to SolarCity. Considering the fact that the company isn't profitable today and we have no history to prove that lease contracts will live up to expectations 20 years into the future. I think the risks are higher than many investors think.

A top solar stock with significant risks
As SolarCity navigates the solar industry it will need to adapt and change. The leasing company you see today will look very different in five years. It will likely sell more systems than it leases and new components like energy storage and smart home controls will be a key to selling solar systems. But few companies are as willing to adapt as SolarCity.

To put some numbers to the company's value, management said on its recent earnings conference call that, even with changes in the market, they can generate an NPV of $1 per watt or more long-term. This is lower than its reported retained value per watt of $1.72 today but is still a solid margin. If it can grow to over 1 GW installed each year and execute on expansion plans, like solar panel manufacturing and battery storage, it could generate well over $1 billion in annual NPV, which would mean a bright future for investors.

SolarCity's current $5 billion market cap provides plenty of upside if the value outlined above plays out. But there's also risks that investors can't ignore. I think SolarCity's stock is a top solar stock and a solid buy today, but it's far from a bargain given the competition and risks in the U.S. solar market.