Please ensure Javascript is enabled for purposes of website accessibility
Log In Help Join The Motley Fool
Free Article Join Over 1 Million Premium Members And Get More In-Depth Stock Guidance and Research
By Travis Hoium - Dec 20, 2014 at 10:10AM

Final tariffs on Chinese solar panels could kill the country's exports to the U.S.

The U.S. Department of Commerce hit Chinese solar manufacturers with a devastating blow on Tuesday when it set anti-subsidy and anti-dumping tariffs that cover not only China but also Taiwan, where panels coming to the U.S. were "tolled" to save paying the previous tariff.

Implications for the U.S. solar industry are far reaching and your opinion on the case may depend on where you sit, or invest, in the industry. Not only will Chinese manufacturers be stung by the news, U.S. installers who used low cost Chinese panels may see prices rise as we head into 2015. Here's what we know.

Solar tariffs are strong and far-reaching
SolarWorld brought its original trade complaint to the Department of Commerce in 2012 and when it won the U.S. placed anti-dumping and anti-subsidy tariffs on Chinese solar panels. But a massive loophole was created because the trade case had a limited scope of solar cells and just included China.

Late last year, SolarWorld fined another petition that sought to close the loopholes and include modules as well as products from Taiwan. That's what the ruling on Tuesday included and the cost to Chinese suppliers is incredible. 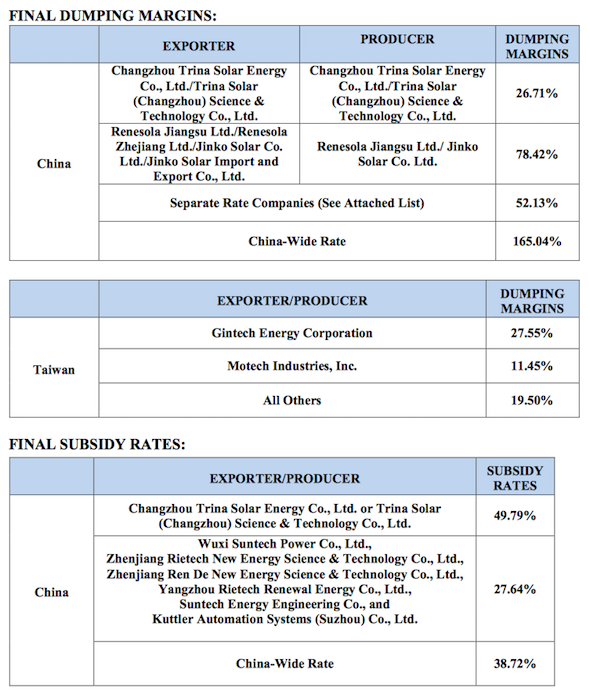 Source: SEIA and the U.S. Department of Commerce.

The impact on U.S. solar
Chinese solar firms will certainly be negatively affected by this ruling, but they're not the only ones. U.S. installers SolarCity (SCTY.DL), Vivint Solar (VSLR), and SunEdison all use Chinese panels for their installations in the U.S.

Vivint Solar and SunEdison, in particular, could be hit hard because they're so reliant on Chinese supply. Even as they transition away from non-Chinese suppliers, they'll likely see higher prices because U.S. installers will be clamoring for the same solar panels.

SolarCity has made moves like signing a supply agreement with REC Solar earlier this year. The 100 megawatt deal, which could grow to 240 megawatts, won't supply all of the capacity needed for SolarCity but it'll ease some of the pricing pressure. On top of that, SolarCity is building a 1 gigawatt plant with technology acquired from Silevo, which is intended to supply most of the company's panels as early as 2017.

Some installers like SunPower (SPWR -0.48%) and First Solar (FSLR -1.05%) will actually see a benefit from these new tariffs in the U.S. They manufacture most of their panels in the Philippines and Malaysia respectively and won't be subject to tariffs. They've effectively lowered their costs compared to competitors without doing a thing.

With companies like Trina Solar and Canadian Solar increasing supply further in 2015 I have to wonder where the solar panels are going to go. We know now that it won't likely be the U.S.