A look at why Broadcom feels its competitive positioning in the fierce world of connectivity combo chips continues to be robust.

Broadcom (NASDAQ: BRCM) is well known as a key connectivity chip supplier into high-end smartphones such as Apple's (AAPL 2.14%) iPhone and the higher-end Samsung (NASDAQOTH: SSNLF) Galaxy products. However, investors have always worried Broadcom might eventually lose key connectivity slots to rival Qualcomm (QCOM 2.34%), which has been aggressively developing its own mobile connectivity solutions.

Broadcom broadband and connectivity chief Dan Marotta recently laid out a compelling argument for why Broadcom's position in smartphone connectivity chips could be far more defensible than some might think.

Specs and performance aren't necessarily the same
Speaking at Broadcom's analyst day earlier this month, Marotta discussed the company's BCM4354 2x2 MIMO connectivity combo chip that also integrates Bluetooth. He said many of its competitors also have chips that offer the same functionality. The devil, however, is in the details.

"I think what's unusual about a product like this is being able to make it at a cost point and performance that's very interesting," Marotta noted. Although a number of competitors have chips that support the same specifications, Marotta believes Broadcom's products can achieve "maximum performance" in what he called a "difficult radio environment."

For a sense of what Marotta is talking about, it's worth going back to last year's analyst day, at which the company compared a Broadcom Wi-Fi chip against a competing chip with a similar feature set: 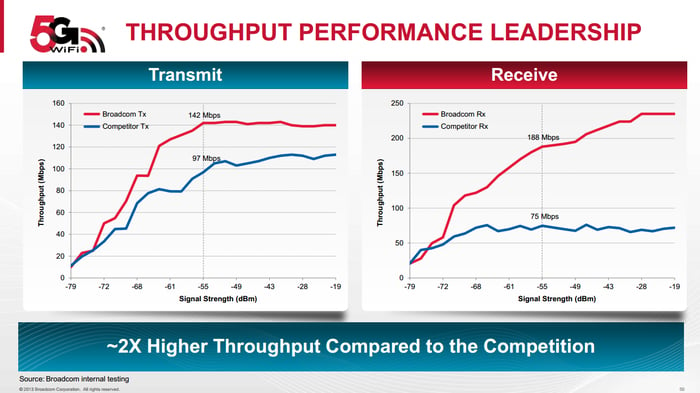 Marotta also pointed out that Broadcom's customers, such as Apple and Samsung, demand such extensive testing to ensure high quality levels that customers would find difficult to give up. In fact, according to Marotta, the software infrastructure Broadcom has in place to support its chips is a key reason for its continued success in the high end of the mobile connectivity business.

"We're the gold standard in many of these products that other competitors have to live up to, and that's what keeps us in these sockets," he said.

Time to market and track record are critical
Companies such as Apple and Samsung generally release flagship phones on a yearly cadence, which means Broadcom needs to deliver chips under a very tight schedule while maintaining high product quality levels. Marotta pointed out that Broadcom has successfully executed on multiple generations of connectivity chips for these flagship phones.

In a nutshell, Marotta believes Broadcom's track record in handling "compressed schedules" and "delivering technologies that just work better" is key to the company's continued success in the competitive market for mobile-focused connectivity chips.