Aircraft maker Boeing (NYSE:BA) faces a situation that is equally desirable and perplexing. On one hand, its order book for commercial jets is soaring to all-time highs, and there is a huge upside in store with the market poised to grow substantively. What's perplexing? Boeing will have to invest heavily in ramping up production, as its current output rate is falling behind demand, which could mean higher capital expenditures and lower free cash flow. Is this bad news for investors?

Boeing's dilemma?
Boeing has a commendable mastery over capital management -- it has kept tight control over expenditures, increased cash from operations, paid handsome dividends, and bought back shares. These virtues have stood the company in good stead.

But a swelling order book has forced Boeing to gradually increase capital expenditures, from $1.7 billion in 2011 and 2012 to $2.1 billion last year. In the current fiscal year, the American aircraft manufacturer expects to pour in about $2.3 billion. Although this is not a significant increase from 2013, capex will keep increasing for a couple years as Boeing clears an order book that has crossed 5,500 units. Its book-to-bill ratio of more than one means new orders continue to surpass delivery numbers.

A growing backlog is good news, but investors need to keep in mind that delivery time is a major deciding factor for airlines in buying aircraft. Case in point: recent Delta Air Lines recently placed an order with Airbus, as, among other things, Boeing's stretched delivery schedule didn't match the airline's plans. There is also the risk of orders being canceled with delivery schedules as long as they are today. Boeing needs to increase production rates to strike a better demand-supply balance. Increased production could mean higher wages and overhead costs, but more deliveries would mean better revenue realization and faster monetization of the backlog.

The ground work
Boeing is focused on the 737, 777, and 787 programs, as these generate maximum revenue. It intends to augment production of the 737 (which makes up about a quarter of the backlog) from the current 42 a month to 47 in 2017, then to 52 a month in 2018. The aero major is investing in several facilities in the Puget Sound region of Washington state to support the production and increased deliveries of this plane.

Apart from this, Boeing is expanding its South Carolina plant to include a new paint unit, which will begin painting 787 Dreamliners starting in 2016. The newly opened operations center at Seal Beach, CA will offer support services to more than 800 airline operators flying Boeing airplanes. By the end of 2015, the center's services would include support for the next-generation 737, 747, 767, and 777 aircraft. The company's composites facility at St. Louis, Mo., which has been conventionally used for making military aircraft, will be expanded to manufacture parts for the 777X starting in 2017.

Cash flow
In the first nine months of 2014, Boeing's commercial plane deliveries improved 11% from the same period last year. But the high cost of the 787 Dreamliner program has severely hit free cash flow, which stood at $2.2 billion this year against $5.3 billion clocked in the same nine month period last year.

The need to increase capital expenditures on top of the present cash position is a sticky situation over the medium term for Boeing. If the company does not increase capex, it cannot expand capacity, and if it cannot expand, deliveries will suffer, putting backlogs at risk. However, Boeing and its investors could get some respite when the Dreamliner program turns profitable -- expected in 2015. Boeing ramped up the 787 production rate to 10 per month earlier this year, and plans to augment that rate to 12 per month in spring 2016.

It's difficult to predict whether the positives will outweigh the negatives, or vice versa, but it's something for investors to keep an eye on. A turnaround in cash flow would help investors gauge how well Boeing is capitalizing on the current momentum in demand. 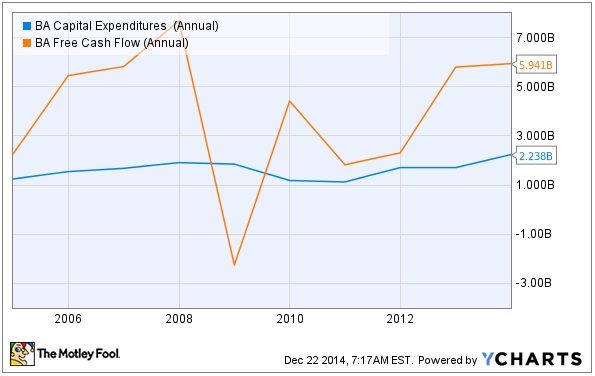 Last words
Marching on with its capex plans is a gutsy move by Boeing, even as some will argue the company didn't really have a choice. Investors could track the implementation of the planned production hikes to see whether they actually ease some of Boeing's cash flow issues. Positive outcomes would bolster investor confidence in the stock and boost optimism that Boeing will deliver the goods.