As 2014 draws to a close, it will be remembered as an absolutely awful year for the offshore drilling industry. As we see in the chart below, the best performing offshore drilling stock is off 44% from its 52-week high, while others have fallen even farther. 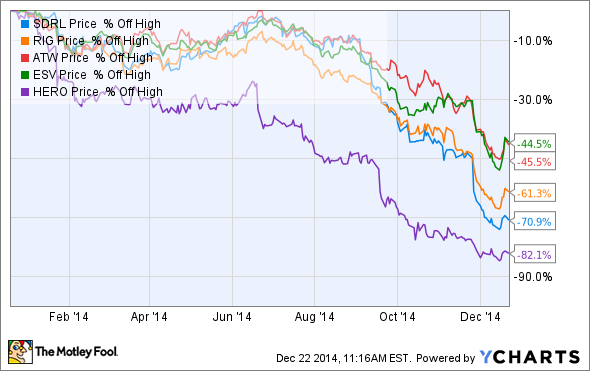 Here's why the industry imploded in 2014.

Early warning signs
Transocean LTD
(NYSE:RIG) was the first to warn investors that 2014 could be a rough year for the offshore drilling industry. The company pointed out at an industry conference that it had 14 rigs coming off of contract in 2014 that didn't have new contracts lined up. Industrywide, a total of 39 rigs were expected to come off of contracts in 2014 at a time when a number of newbuild rigs were hitting the open seas. The reason so many rigs were without a contract had to do with the fact that oil companies were struggling to generate a lot of free cash flow even though oil prices were well over $100 per barrel as high costs were cutting deeply into the cash flow of oil companies. Because of this, oil companies were cutting back on deepwater drilling until either oil prices went higher or dayrates for drilling rigs started heading lower.

What we saw instead was a dramatic slide in oil prices that caught everyone off guard. 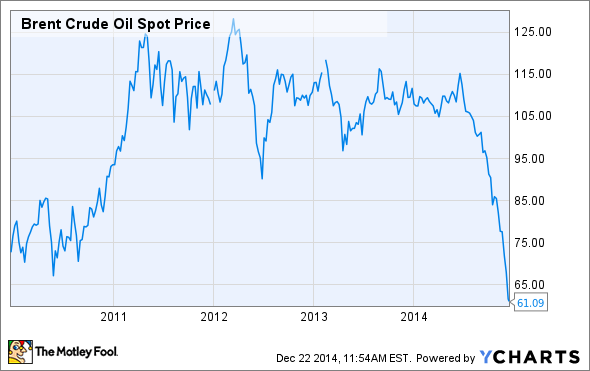 The unexpected slide in oil prices really exacerbated the offshore drilling industry's problems because it would make it even harder for oil companies to make money drilling deepwater wells. This forced the industry to take action to stay afloat as the industry really hit turbulent waters.

Taking action
Each company responded to the worsening industry in different ways. Seadrill Ltd (NYSE:SDRL), for example, initially thought it could make it through the storm without making any major changes. The company's first action was to announce the delaying of the deliveries of a couple of its newbuild drillships by up to six months. The company said these delays were coming from the shipyards falling behind schedule. While that might be the case, we've seen other offshore drillers like Atwood Oceanics, (NYSE:ATW) pay extra fees in order to delay newbuild deliveries by six months hoping that the extra time would make it easier to find contracts for these rigs.

Meanwhile, other drillers like Hercules Offshore, Inc. (NASDAQ:HERO.DL) handed out pink slips as it idled drilling rigs. In idling, or cold stacking rigs, the industry has taken some of the oversupply out of the marketplace. However, some companies, including Transocean, are permanently reducing supply by retiring the oldest and lowest-specification rigs. So far Transocean has retired 11 rigs and might retire even more. These moves do come with a price as Transocean has already taken $2.76 billion in impairment charges, including $788 million in writedown to the value of the company's rigs with another writedown of up to $140 million coming again in the fourth-quarter.

Cutting out older rigs aren't the only cuts being made by offshore drillers. Seadrill, which said its dividend was safe through 2015, with increasing visibility that it was safe until 2016 ended up cutting it all together as oil prices plunged. The company is going to use the $2 billion it's saving to buy back both stock and debt so that it can stay afloat during the turmoil in the market.

At the same time, drillers, like Ensco PLC (OTC:VAL), that didn't have a lot of debt heading into the crisis raised capital before things got worse. The company raised $1.25 billion in debt in the third-quarter while also increasing and extending its credit facility. Those actions enabled the company to increase its financial flexibility as it seeks to fund the seven rigs it currently has under construction. It acted early as it didn't want to be faced with closed credit markets when it needed cash to fund its contracted rigs.

Investor takeaway
We saw the offshore drilling industry take a number of actions in 2014 as the industry's slump worsened when oil prices fell off of the table. These actions were all made in order to preserve the long-term futures of each company. The industry sees an incredible future need for drilling rigs as older oil fields deplete and new ones need to be discovered and brought online. While the downside of the cyclical industry made 2014 an awful year, the upside still hasn't changed. The world needs an incredible amount of oil in the years ahead and a lot of that oil will be delivered by the offshore drilling industry.