The investing public tends to take a special interest in the stocks billionaire investors are buying or selling, often copying their behavior in hopes of beating the broader market.

According to recent 13F filings submitted to the SEC, we have learned that billionaire superinvestors have started gobbling up AbbVie, (NYSE:ABBV), Celladon Corp. (NASDAQ:EIGR), and Kite Pharma (NASDAQ: KITE). So let's consider why these stocks are attracting some of the world's best investors right now.

AbbVie is a tough negotiator
Although a number of big-name investors jumped into AbbVie in the third quarter, John Paulson's hedge fund put them all to shame with their purchase of an astonishing 13 million shares, according to the 13F filings. What do they see in this company to take such a massive position?

First off, it's important to understand that AbbVie is a stunningly successful spin-off from Abbott Laboratories (NYSE:ABT). Since splitting from Abbott in January 2013, for example, its shares have absolutely soared: 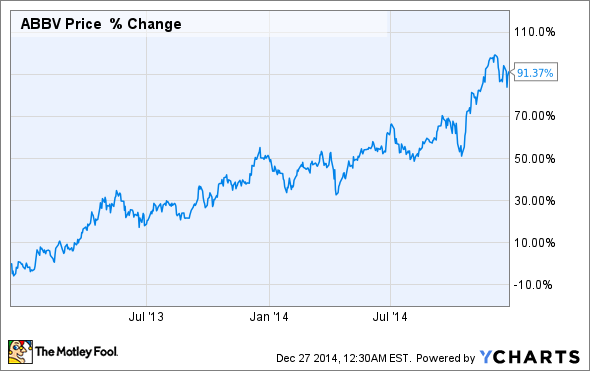 The key to AbbVie's rapid rise has been its flagship anti-inflammatory drug Humira, which was the world's best-selling drug in 2013, posting $11 billion in sales.

But it hasn't exactly been smooth-sailing AbbVie or Humira. Because of the drug's nearly unmatched growth profile (double-digit sales growth in every quarter since AbbVie has been an independent company), competitors have raced to reach the market.

In 2012, Humira faced perhaps its biggest threat with Pfizer's (NYSE:PFE) Xeljanz. Management has more than proved its worth, though, by securing favored reimbursement status for Humira with leading pharmacy benefits managers such as Express Scripts. Xeljanz, on the other hand, was excluded from Express Scripts' formulary this year.

Last December, we saw this same scenario play out with AbbVie's new hepatitis C therapy Viekira Pak. After Gilead Sciences (NASDAQ:GILD) refused to lower the price on its market-leading hep C drugs Sovaldi and Harvoni, AbbVie's management was able to negotiate a multiyear agreement with Express Scripts for genotype 1 patients, effectively excluding Gilead's offerings for the most common form of the disease.

We'll have to wait and see how this deal translates into market share and how other pharmacy benefits managers will react to Viekira Pak's approval. But AbbVie looks like an excellent long-term buy for all the reasons I've mentioned.

Baker Brothers take out a big position in Celladon
Billionaires Felix and Julian Baker snapped up 375,000 shares of the clinical-stage biotech Celladon Corp., through their Baker Bros. hedge fund, in the third quarter.

Riding the renewed interest in the field of gene therapy of late, Celladon specializes in diseases associated with so-called SERCA enzymes. These enzymes help regulate intra-cellular calcium in human cells and are believed to be medically important in a diversity of diseases, such as heart failure, vascular disease, and diabetes, among others.

Why did the Baker Brothers jump into Celladon now? This small-cap biotech is expected to announce top-line results in April for its mid-stage study for Mydicar, a gene therapy that targets an enzyme, SERCA2a, that's associated with advanced heart disease.

Put simply, the market would more than likely radically revalue the company if this trial reports positive results. Not only would a positive result allow Celladon to advance Mydicar into a pivotal late-stage trial, but it would also go a long way toward validating the company's therapeutic platform in general.

On the flip side, Celladon's shares have been surging higher in anticipation of this clinical catalyst, meaning that a failure would probably result in a huge drop in share price. 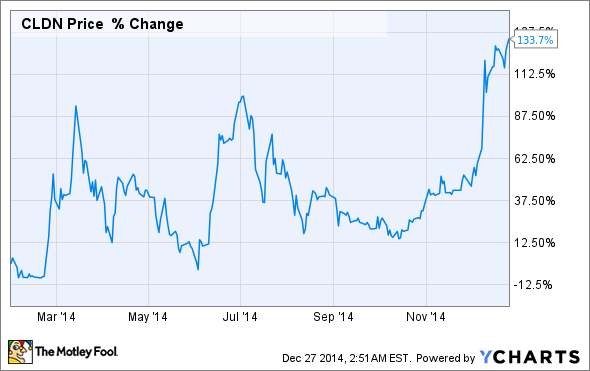 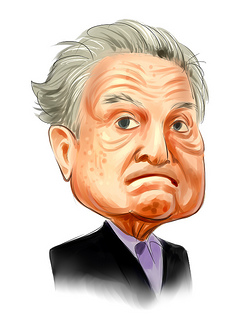 George Soros likes Kite Pharma
Hedge-fund guru George Soros has never been afraid to dabble on the speculative side of investing, and he proved as much by gobbling up roughly 660,000 shares of Kite Pharma through its IPO.

Kite Pharma has seen its shares blast higher since its IPO, largely because investors have become enamored with the field of immuno-oncology in general. Even so, Kite's move northward was initially triggered by encouraging early-stage results for KTE-C19 as a potential treatment for aggressive non-Hodgkin's lymphoma. Since these results were made public and the company decided to advance KTE-C19 into mid-stage testing, shares have nearly doubled: 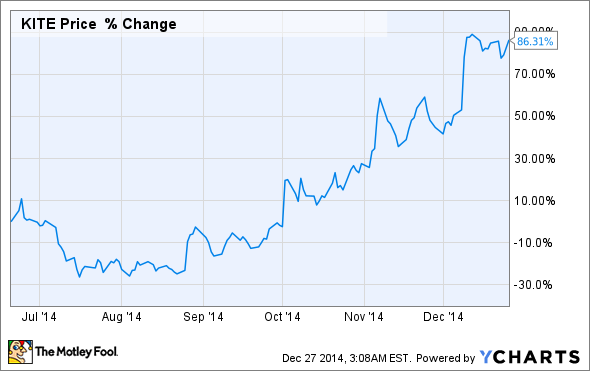 Before investors decide to follow in Soros' footsteps, though, I think there are a few points to consider. First, Kite is probably years away from having a commercial product generating revenue, and as such, the company will have to rely heavily on public offerings to fund its growing clinical activities. Next, Soros is well known for taking profits after a huge run-up like the one Kite has experienced. I therefore wouldn't be surprised to find out next quarter if he already sold most, if not all, of his Kite shares.

Are any of these billionaire picks right for retail investors?
Of these three stocks, AbbVie sticks out as the only compelling buy for the little guy. With strong cash flows, a history of raising its dividend, and a great management team, AbbVie should continue to be a top healthcare stock for a long time.

Celladon and Kite Pharma, on the other hand, might turn out to be better picks because of their huge upside potential. But their risks are simply too high for my taste.