Kinder Morgan Inc's (NYSE:KMI) Chief Operating Officer and eventual CEO, Steven Kean, spoke at a recent investor conference. He touched on a lot of subjects including what is driving future demand, as well has his thoughts on oil. While those two topics dominated much of his talk, there were three other important things he took the time to address that investors and analysts should know about the company's business.

No change in outlook

Kinder Morgan completed the acquisition of its affiliated MLPs within the past month. However, during that time a lot changed in the energy industry due to the dramatic drop in oil prices, but not much has changed with respect to Kinder Morgan. This was pointed out by Kean in his opening remarks by saying,

Now, a lot has happened even just in the few short weeks since that transaction closed. There's been a lot of blood spilled in oil markets, certainly. We're very happy to have the business mix that we do, and you see most of our businesses here are fee-based terminal and pipeline businesses. That's where most of our $8 billion plus of earnings before DD&A come from.

Because most of its earnings are derived from fee-based assets Kean is not really worried about the drop in oil prices. It also doesn't hurt that the company's oil production is well hedged in the short-term and it also has substantial coverage for its dividend to the tune of an estimated $500 million in excess cash flow. That's why the company's outlook isn't changing despite the big changes in the energy market.

Why Kinder Morgan is so good at calling its shots
He went a little deeper into the makeup of the company's businesses and how it operates, which is the key to the company's ability to project so accurately. He said that,

The business is more predictable. It enables you to call your shots a little bit more. The stable, fee-based assets we're able to project down. When we get into the budget meetings every year, on an $8 billion plus base of EBITDA, what we're spending all of our time debating is a $300 million to $350 million difference between our outlook and what the business units turned in as an additional draft. I mean, we're talking about kind of the tippy top of the revenue stream here.

With so much certainty, the company can fairly accurately project its earnings not just for the next quarter, but for years in advance. However, the company doesn't just look at the big picture, it manages every little detail. Kean pointed this out by saying,

[...] we manage for the details. We manage -- every week we update financially. We update our operational performance and everything else, project performance, major commercial transactions. But, we update our financial outlook for that month, that quarter, and that year every week, every week. So, if something's changing, contract not renewing in May or something, we're sitting here in February, we're reacting to that. So, we stay on top of our business. We stay on top of our risks and opportunities. We don't let a week go by without them being acted on. And when you do that, you always know where you stand.

The combination of having secure assets while also managing every detail before it becomes a problem has enabled the company to develop quite the track record of accurately projecting its results. We see this on the following slide. 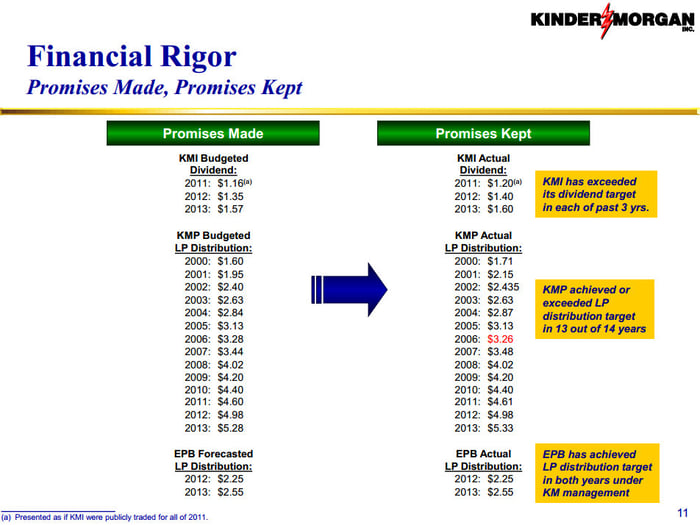 As that slide notes, the company missed its expectations one time in 14 years. More often than not it under-promised and over-delivered. That's what the company expects to continue to do for the foreseeable future.

Thoughts on M&A
The last area Kean touched on was the company's opportunities for new acquisitions. The company has a fairly strong track record of making acquisitions as it closed $24.6 billion in deals since it was founded. These deals, as we see on the chart below, represent more than half of the company's investments over that period. 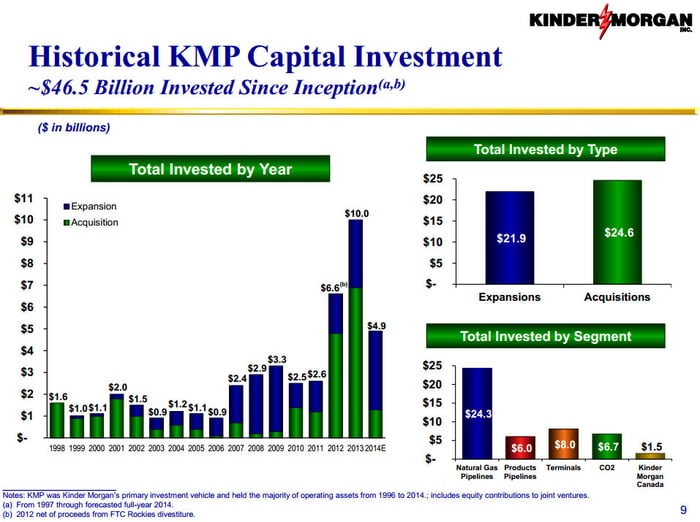 On that subject, Kean had this to say,

We also have opportunities in this new relative valuation environment for acquisitions. Those are harder to call. There are a lot of things you have to work through to make that work. But, we've barely slipped off our 52 week high, and a lot of the rest of the industry has been hit pretty hard. And some of that is because companies are less valuable, but some of it may be an overreaction. Some of it may be companies that have good backlogs that maybe are going to have more difficulty financing them. We're going to be looking for those opportunities out there.

While the company can't project when it will make its next deal it sees the potential for compelling opportunities due to the current turmoil in the energy market. One area in particular he pointed out was companies that could have trouble with financing. Given that Kinder Morgan's credit rating is investment grade, it could be a key company to step in and either acquire assets that need to be funded, or entire companies that need funding, because it has that access to capital.

Investor takeaway
While the energy sector is filled with worry these days, that's not something we see at Kinder Morgan. The company's outlook hasn't changed because its business is as stable as it gets. Further, the company sees the current turbulence as an opportunity for acquisitions making this an exciting time to be an investor in Kinder Morgan.