If on Jan. 1, 1980, you had invested in the S&P 500 and held that position until today, your investment would have returned about 1,880% including fully reinvested dividends -- not bad.

That said, if you possessed the superhuman bank stock picking skills of Warren Buffett, that 1,880% would look pretty disappointing. The S&P's return over this period is a joke compared to that of three Buffett bank stock picks over the same period.

The universe of bank stocks
When I first began the research for this article, I wasn't intending to find yet another example of Warren Buffett's artistry; that simply happened when I attempted to find the top-performing bank stocks of the past 35 years.

The search began with a list of 65 U.S. bank stocks currently trading on either the Nasdaq or the New York Stock Exchange. I excluded custodian banks, investment banks, and other institutions that didn't quite qualify as old-school banks, i.e., those that lend money and accept deposits as a primary business function.

Using data from YCharts, that list was trimmed to just 24 banks with sufficient stock price history dating to 1980. I chose 1980 because it's a nice, round number and also because it's far enough back in time to capture the full impact of the savings-and-loan crisis of the mid- and late '80s.

From there I compared the total returns of these 24 banks. It was at this point that I marveled at Buffett's wizardry.

The top three
It turns out the top three banks in terms of total return price over this period of time happen to be the heaviest-weighted banks in Buffett's portfolio. It's OK if you want to pause, laugh, and say, "Of course they are!" I had the same reaction.

Buffett first built a meaningful holding in Wells Fargo in 1990, a few years after he first invested in M&T Bank in 1988. US Bancorp, on the other hand, didn't appear as an itemized investment in Buffett's annual letter to shareholders until 2006.

Here's a chart of M&T Bank's and Wells Fargo's normalized total returns since 1990, which will give a better idea of how the investments have played out for Buffett: 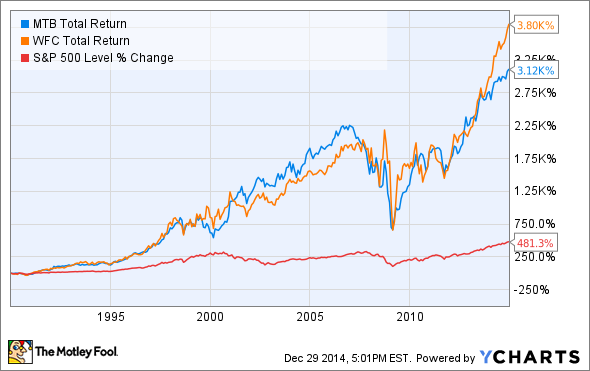 Both investments are certified home runs. Time will tell how the investment in US Bancorp will play out, but so far it's off to a great start: 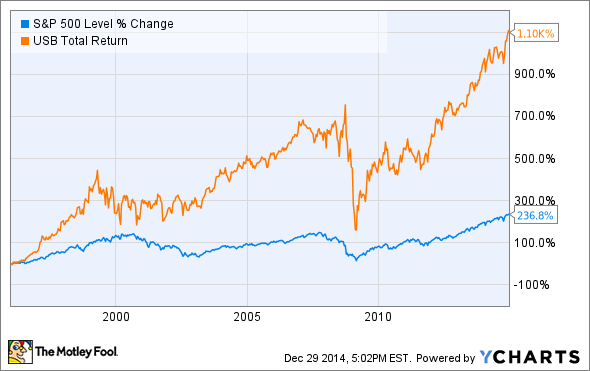 Are there any lessons to be taken from the Oracle's crystal ball?
One takeaway that immediately jumps out to me is that each of these banks was already established and running smoothly before Buffett invested a dime. There was no turnaround story or speculative play. These companies were rock-solid from the start. Buffett's genius was recognizing the massive room left to run in already established players.

I've written previously on some common characteristics of Buffett's bank stock analysis, and these banks obviously check all of those boxes. They're efficient, they're conservative, and they have each traditionally yielded strong returns on assets and commanded a premium valuation. They are headed by industry-leading management teams -- true top dogs in modern bank management.

The biggest takeaway, though, is that investing in bank stocks can be very lucrative. The financial crisis was a stark reminder of the risks in the banking business, but that shouldn't make you afraid to invest in a top-notch bank. Each of these three institutions has weathered a savings-and-loan crisis, a tech bubble, and the financial crisis over this 35-year period. And despite all of these massive shocks, their total returns still crush the rest of the market.