AZZ reported a disappointing set of earnings for the third quarter, and also reduced full-year guidance. A detailed look at its earnings report.

It's a good idea to look behind the headlines at AZZ (AZZ 1.81%) earnings reports, because the electrical equipment maker and galvanizing specialist has had plenty of issues to deal with recently. For example, in the second quarter of its fiscal year, AZZ's energy operations suffered margin decline due to "operating inefficiencies." Meanwhile, its galvanizing margins fell due to a combination of increasing costs related to an acquisition, the reopening of a plant, and a realignment charge. Were these issues dealt with in the just-reported third quarter? Moreover, would management maintain its full-year guidance, as it did in the second-quarter earnings presentation?

AZZ gives third-quarter results
A brief summary of earnings and guidance versus expectations for the third quarter:

In short, revenue was light but EPS came in higher than projected. However, investors shouldn't get too excited by the earnings number, which was positively affected by $0.6 million, or $0.02 per diluted share, from the net effect of insurance proceeds to cover costs related to a fire in AZZ's Arizona galvanizing facility. Excluding the nonrecurring item leaves an adjusted diluted EPS of $0.75 -- only $0.01 ahead of the consensus estimate.

Guidance reduction
Moreover, the midpoint of full-year revenue guidance was taken down by $37.5 million, or 4.3%, to $837.5 million. It gets worse: the midpoint of full-year EPS guidance was reduced by $0.10, or 3.8%, to $2.50. This primarily relates to the company's energy segment, which is somewhat understandable given the plunge in energy prices. Here is commentary from AZZ CEO Tom Ferguson in the earnings release:

We are closely monitoring developments in the oil and gas market, and the nuclear power market where the signals for continued growth are not as apparent. For the remainder of fiscal 2014, we are adjusting our projections due to the push-out of certain large nuclear related projects at our NLI business unit that we believe will now ship in the later part of our next fiscal year

Given that this is the third quarter of the company's fiscal year, these projects look like they will be pushed out by a year's time. Investors and analysts should thus ask whether management is of a mind to increase its estimate for next year's prospects.

Operating margin increased in both segments on a yearly and sequential basis -- good news. 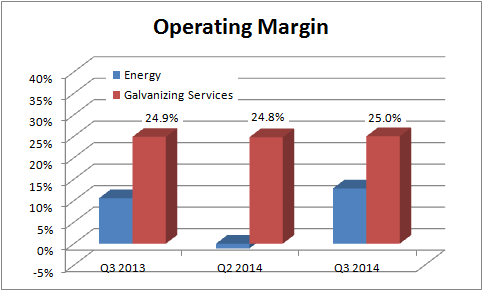 Turning to the galvanizing segment, the operating margin was at least superficially better, but that $0.6 million in insurance proceeds helps to flatter results. Excluding this figure from the segment's operating profit results in an operating margin of just 24.4% -- a figure lower both year over year and from the previous quarter. Investors will be looking for margin improvement in the galvanizing segment because it contributed 70% of segmental income in the first nine months of the fiscal year, up from 66% in the same period of the preceding year.

What it means to investors
All told, the earnings guidance reduction was a disappointment. It's good that the company has improved efficiency in its energy segment, but the push-out in shipments has hurt its prospects. Meanwhile, galvanizing margin was not as strong as the headline number suggested. On a more positive note, the company's backlog increased 3.6% sequentially, to $300.3 million, and any positive news with oil prices and/or the push-outs in its nuclear-related projects are likely to be warmly received by the market.