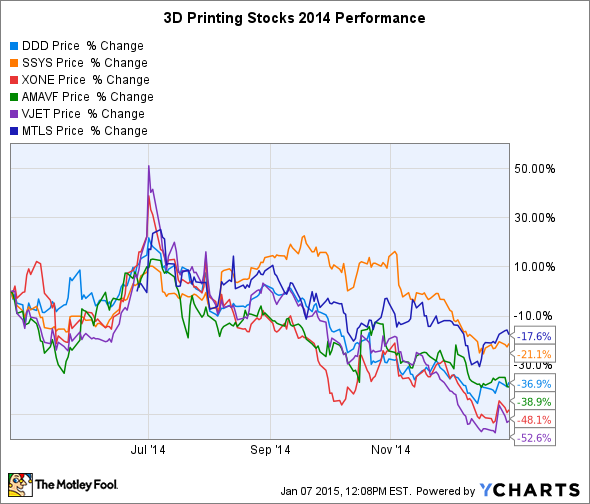 1. Sky-high valuations
Going into 2014, 3D printing stocks likely commanded difficult-to-justify valuations, making it hard for many investors to believe they were underpriced relative to their market opportunity. Have a look in the table below at their valuations at the onset of 2014, which could easily be considered richly valued based on historical norms. (Materialise has been omitted because it wasn't a publicly traded company until June 2014.)

2. Disappointing earnings
In one way or another, the majority of 3D printing stocks disappointed on Wall Street expectations in 2014; coupled with the sector's lofty valuations, it seems likely that this was a major contributor to the space suffering a down year.

3D Systems and voxeljet were among the most guilty of this offense -- both missed earnings expectations three quarters in a row -- but ExOne wasn't far behind thanks to its ongoing transition that continued to drag on earnings results while it refocuses its efforts from targeting metal foundries to targeting the foundries' customers. Stratasys, which executed better than 3D Systems in terms of meeting earnings expectations, was punished for lowering its earnings guidance in November. Thus far, Arcam has delivered mixed results in 2014, but finished its third quarter on a positive note.

3. Changes in sentiment
In 2014, various media outlets and Wall Street analysts began to question the meteoric rise that 3D printing stocks experienced in 2013, and this more critical portrayal may have tempered investor enthusiasm toward the sector. Barron's even ran a cover story that exclaimed, "Beware 3-D Printing!," citing the potential dangers of investing in the space, while CNBC rounded up a host of analysts who were bearish on the sector. Compounding the issue further, during 2014, four analysts formally downgraded 3D Systems' stock, one downgraded Stratasys', and one downgraded ExOne. In all, the collective negativity surrounding 3D printing may have helped drive short interest largely higher across the sector. 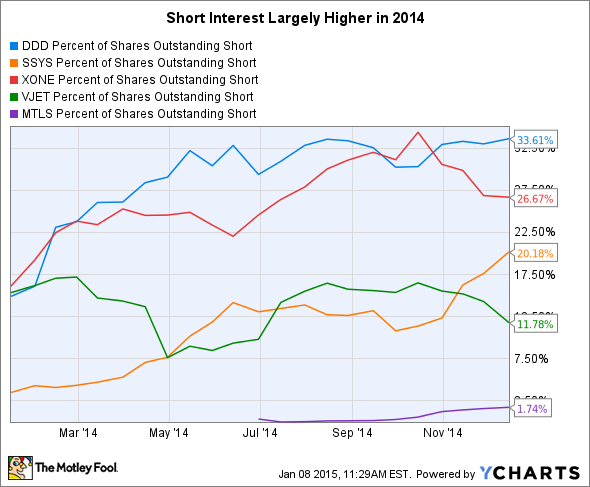 4. Increasing competition
Investors had to more seriously consider the threat of increasing competition in 2014, thanks to a host of patents around key 3D printing technologies expiring and deep-pocketed players making their plans to enter the space known. Specifically, patents around stereolithography and selective laser sintering 3D printing technologies have expired in 2014, and in both instances it has invited new competition that's often willing to democratize access to technologies that are typically reserved for higher-end systems and applications.

Hewlett-Packard's recent announcement that it plans to enter the 3D printing space in 2016 with a homegrown technology it's calling Multi Jet Fusion, which it claims is up to 10 times faster than current-generation selective laser sintering and material jetting technologies, may also have made investors worried. After all, HP brings decades of experience manipulating droplets, an expertise it's using as the foundation of Multi Jet Fusion, and some industry experts have already gone on record praising HP's upcoming offering.

Taking a step back
Over the last three years, shares of 3D Systems and Stratasys -- the only publicly traded 3D printing stocks at the time -- have outperformed the S&P 500 by a wide margin, suggesting that 3D printing stocks are a highly volatile space and that performance can vary widely from year to year. It also appears that having a long-term time horizon when approaching a highly volatile sector like 3D printing could be valuable to investors. 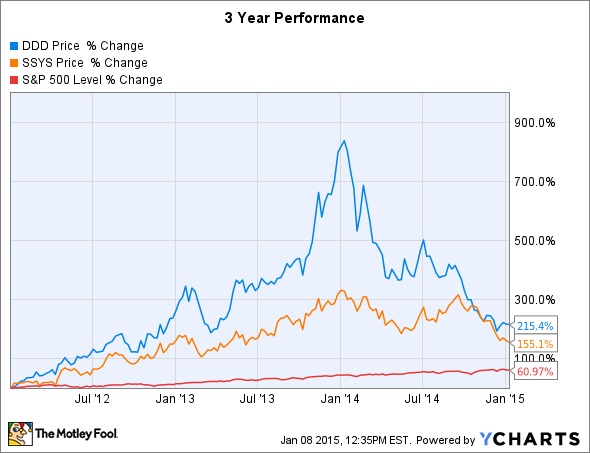 Going back five years yields even better results for investors and potentially reinforces the value of having a long-term time horizon and being patient: 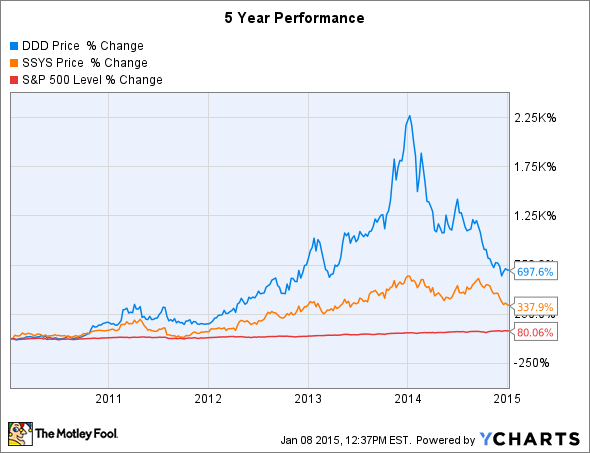