They say imitation is the sincerest form of flattery. But for investors, those are dangerous words to live by. For every individual in the stock market, there are different tolerances for risk, time horizons, areas of expertise, and life circumstances. Blindly following an investing guru is not wise.

Having said that, there's little harm in looking through the decisions of the world's most successful investors in search of stock ideas. Then you can decide what makes sense for your own investing strategy.

During the third quarter of 2014, hedge fund tycoons were bailing out of some stocks as fast as they could. But what does that mean for the average investor? We asked three of our analysts which stock sales stood out to them. Read below to see why Apple (NASDAQ:AAPL), Herbalife (NYSE:HLF), and Comcast (NASDAQ:CMCSA) (NASDAQ: CMCSK) were all on the chopping block for some of the world's most successful investors.

Travis Hoium: Apple
The stock that hedge funds are ditching the fastest is Apple, but the story is deeper than just selling by large funds. According to Hedge Fund Tracker, hedge funds sold $1.3 billion of Apple stock in the third quarter after flocking to the stock earlier in the year. A big reason may be the gains Apple put up in 2014. 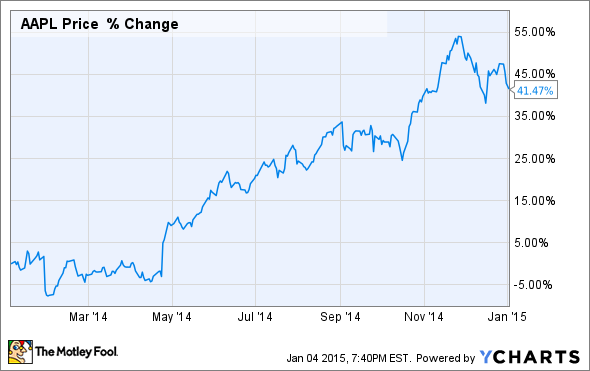 One of the challenges for Apple is the sheer size of the company. Its market cap has ballooned to $641 billion, and to put up another 41.5% gain in the next year, it would have to add $266 billion to that value. With the only product on the horizon -- Apple Watch -- an unknown, iPad sales down year over year, and the stock trading at 17 times earnings, there may not be that much upside for investors.

And given that hedge funds are incentivized to make big gains for their investors, the move out of Apple isn't surprising.

Brian Stoffel: Herbalife
Of all the sales hedge funds made in the third quarter of 2014, none sticks out more to me than George Soros' decision to part ways with roughly 60% of his investment in Herbalife.

Back in 2013, shortly after Bill Ackman of Pershing Square Capital announced a massive short position in the company, Soros jumped in on the other side of the bet. Ackman claims that Herbalife is a pyramid scheme that targets poor and minority populations. At the time, Soros apparently didn't agree -- or at least thought such a business model wouldn't damage Herbalife's stock.

At its height, Soros' position in Herbalife was worth around $390 million -- not bad when you consider he likely paid between $165 million and $210 million for it. But 2014 was not kind to Herbalife stock, which lost 43% of its value between the beginning of the year and end of the third quarter.

Soros may have been spooked by a number of factors, including investigations by the FBI, FTC, and Department of Justice; an SEC investigation into Soros' timing and decision to buy Herbalife; and second-quarter earnings that disappointed Wall Street.

Personally, I believe Herbalife will be forced to change its business model to satisfy regulators, and this will have a negative effect on profitability. I think it's likely Soros was thinking the same.

Joe Tenebruso: Comcast
Of the stocks being unloaded by major hedge funds, the one that stood out to me was Comcast -- and in this case, I believe these funds are right to be selling.

Comcast is one of the most hated companies in America, as noted by a recent poll of 70,000 U.S. consumers by the American Customer Satisfaction Index. As my colleague Jeremy Bowman explains, "High prices, poor reliability, and declining customer service are to blame for low customer satisfaction with pay TV services. The cost of subscription TV has been rising 6% per year on average -- four times the rate of inflation."

For many years, consumers did not have much of a choice when it came to cable TV or Internet access, with many of the cable companies having near-monopolies in their territories. While that remains somewhat true, consumers now have a choice to ditch cable altogether in favor of less expensive Web-based entertainment options offered by the likes of Netflix (NASDAQ:NFLX) and Amazon.com (NASDAQ:AMZN).

This cord-cutting trend is a major risk for Comcast, and it's already underway. The number of Americans who paid for TV fell by more than a quarter of a million in 2013, marking the first full-year decline on record. I expect that decline to continue and accelerate, and as such, I'd stay clear of Comcast's shares.