The argument of splitting PepsiCo in two hasn't diminished with the passage of time. Photo: Mike Mozart via Flickr

After two years of trying divide PepsiCo (NASDAQ:PEP) into two companies -- one focused on beverages, the other on snacks -- billionaire investor Nelson Peltz has apparently arrived at a detente with management after one of his nominees was appointed to the beverage giant's board.

Breaking up into bite-sized pieces
Peltz has made the fairly sound argument that Pepsi's Frito-Lay division was being held back by the lackluster performance from soda. Consumers are drinking less carbonated beverages, searching out healthier alternatives like juices (but also energy drinks too), even as they're increasing their taste for snacks.

He's argued the two divisions would do better as individual pure plays in their respective fields, thus maximizing shareholder value. His original plan called for Pepsi to acquire global snack giant Mondelez International (NASDAQ:MDLZ), meld it with Frito-Lay, and then spin-off the beverage business.

Soda's going flat
The effect of the decline in soda consumption can be seen in Coca-Cola's (NYSE:KO) recent announcement that it will be laying off as many as 1,800 workers due to continued sluggish sales in the third quarter, particularly in North America. Sales were down 2% in the region, leading to a 5% decline in operating income.

It's not much better at Pepsi. It's third quarter results saw carbonated soft drink volumes drop 1.5% in North America. Over the first nine months of 2014, Pepsi recorded a 6% drop in operating profits at its PepsiCo Americas Beverages division. 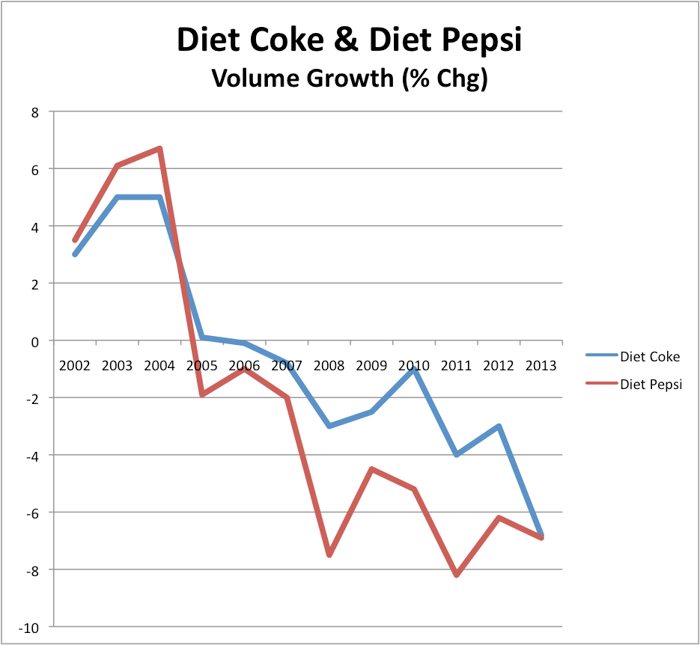 Although Pepsi's board has outright rejected Peltz's overtures, he also lost some of the ardor for the battle after Mondelez appointed him to the board of directors. He even gave up the drive to change the snack king's horrible company name.

Now it appears Pepsi is co-opting Peltz as well by avoiding a noisy and potentially costly proxy battle. What's that old adage, keep your friends close and your enemies closer?

Rattling the cage
Peltz can still agitate for change from the inside. At Mondelez it was likely his advocacy that got the global conglomerate to spin off its coffee business, joining assets contributed by D.E. Master Blenders (NASDAQOTH: DEMBF) to create a new coffee company called Jacobs Douwe Egberts.

And Mondelez has been preparing its European cheese and grocery products business to become a separate entity, allowing it to concentrate on Peltz's preferred opportunity: snacks.

But Peltz's nominee, former H.J. Heinz chairman, CEO, and president William Johnson, will be but one voice out of 14, and the decided minority on a board that unanimously stood against the plan to break Pepsi up.

Of course, the billionaire investor hasn't declared the battle for Pepsi's future over, it's just speculation after what appears to be appeasement by the beverage company. Let's hope not.

Snack on this
The main thrust of his argument has been that Pepsi is being held down by its snack division, and that still holds true today. Frito-Lay saw a 3% increase in revenues over both the last 13- and 39-week periods. This has yielded a respective 5% and 4% increase in division operating profits.

According to the market researchers at IbisWorld, the snack food industry is in "the growth stage of its life cycle" with compounded annual growth of 4.6% expected through 2019 in industry value added, which it says measures an industry's contribution to the economy.

Although Pepsi's stock is up almost 21% for the past year (and 34% over the past two), Peltz argues it's his activism for change that's increased its value. It doesn't make much sense for him to give up on his quest just yet.

If the case for a breakup made sense before he got a seat on the board, it continues to do so now. And if Nelson Peltz's history is any indication, Pepsi won't have quieted him by giving him a place at the table.