Tesla Motors, (NASDAQ:TSLA) is roaring ahead with electric vehicle innovation -- but it's not the only one. EV's need infrastructure, and Tesla Motors has found an unlikely new ally with the power to push electric vehicle feasibility to the next frontier. Here's what you need to know.

Recharge Revolution
NRG Energy, (NYSE:NRG) isn't an auto manufacturer. Not even close. With close to a $9 billion market cap and 53,000 MW of nuclear, fossil, wind, and solar generating facilities spread across 3 million customers in 47 states, NRG Energy, is an electric utility through and through.

But utilities aren't the power-producing stalwarts they used to be. With decentralizing grids, smart meters, and increasingly volatile power portfolios, electric companies are looking for ways to stabilize and diversify their earnings. For NRG Energy that means taking a page out of Tesla Motors' book and building out an enviable electric vehicle charging infrastructure.

Dubbed "eVgo," NRG Energy, currently has charger stations in 10 national markets, with plans to expand to more than 25 markets in the next two years. From San Francisco to Houston to Atlanta, NRG Energy's already entrenched national presence gives it an advantage over Tesla Motors' start-from-scratch expansion. But it doesn't take more than a glance to realize NRG Energy is employing a different growth model: 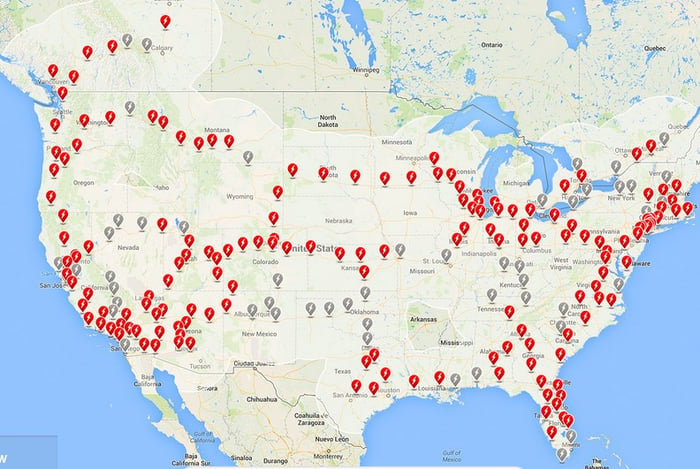 While Tesla Motors' 171 current stations in North America have a significantly wider spread, NRG Energy's 150 stations provide easy electric accessibility within its municipal markets. And more importantly for NRG Energy, its stations aren't an amenity -- they're profit-pulling investments. Owners can pay for individual plans, or hop in on pre-arranged partnerships NRG has with several of America's 13 electric vehicle manufacturers. NRG's "Recharge for No Charge" special offers are available to Ford Motor Co. (NYSE:F), General Motors Company  (NYSE:GM), Porsche, Nissan, and BMW electric vehicle owners in select markets. In their latest quarterly statement, NRG Energy noted that these and other partnerships "have resulted in significant increases in customer count."

Trouble for Tesla, Motors Inc?
With plans to more than double the number of markets it serves by 2016 and an auto manufacturer agnosticism, some investors might think that NRG's eVgo is direct competition for Tesla. In reality, it's the opposite. Despite its mainstream media presence, electric vehicles are still in their infancy. There are currently 300,000 EV's in America -- a mere 0.13% of the 253,000,000 vehicles on the road in 2011 (most recent available data).

NRG Energy, and Tesla Motors, are first movers in one of the most historically difficult-to-disrupt sectors. They're building infrastructure from scratch, and each benefits from the other. Don't believe me? Look no further than NRG's tweet about Tesla Motors' newly announced $35,000 model:

Just as Henry Ford did with the Model T, Tesla Motors is bringing affordable electric vehicles to the masses. But it needs a growing infrastructure and a culture to support it, and NRG's charging network is exactly the type of ally it needs.