Last week, I mused on whether Apple, (NASDAQ:AAPL) investors would "party like it's 2012." That year, Apple overcame doubts about the sustainability of its iPhone success, gross margin surged to record highs, and the stock shot up from around $400 at the beginning of the year to $700 by September. (Apple stock has since split 7-for-1.) 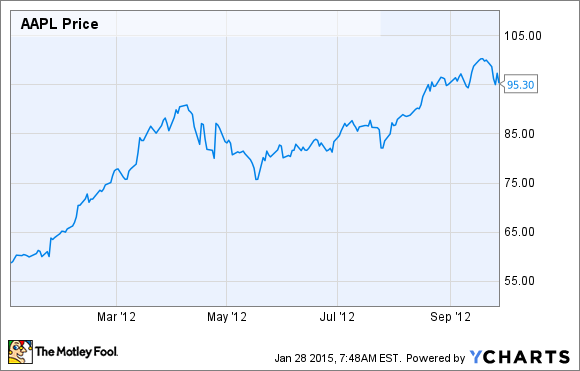 The 2015 party's already getting started. On Tuesday afternoon, Apple released a stellar earnings report for the December quarter -- and gave a forecast that suggests the good times will continue throughout 2015.

In many ways, this looked like a replay of Apple's earnings report for Q1 of fiscal year 2012 (released three years ago in January 2012) -- albeit on a somewhat more modest scale. That time, Apple blew by the average analyst earnings estimate by a stunning 38%, as sales across all of its product lines exceeded expectations and margins expanded dramatically.

Once again, conservative guidance from Apple tripped up a lot of investors. Back in October, the company estimated that revenue would total $63.5 billion-$66.5 billion. At the time, I noted that Apple might be lowballing its guidance, given the inherent uncertainty in how fast iPhone production could ramp up. Apple blew past even the most bullish estimates due to massive iPhone demand. Photo: Apple

As a result, it seemed quite likely that Apple would surpass $70 billion in revenue as long as iPhone suppliers could boost production in line with demand. (It turns out that my estimate was still too conservative!) Sure enough, Apple CFO Luca Maestri stated Tuesday that the company was able to build more iPhones than expected last quarter.

Apple's March quarter guidance suggests that the good times will continue. Apple is projecting revenue of $52 billion-$55 billion, which would represent 14%-20% growth. This compares to an average analyst estimate for revenue of $53.8 billion.

However, once again Apple probably provided ultra-conservative guidance. While the strong dollar is weighing on Apple's international revenue, iPhone uptake remains strong and Apple ended last quarter below its channel inventory target. Apple could get a couple billion dollars in extra sales this quarter from distribution partners increasing their inventory.

The new iPhones have been very popular in China, so sales should benefit from the upcoming Chinese New Year. Photo: Apple

Furthermore, the iPhone 6 and iPhone 6 Plus have been especially popular in China. As a result, the typical spike in sales around the Chinese New Year could be magnified this year. This means Apple could face several more weeks of peak iPhone demand before sales start to taper off to a more sustainable level.

Apple CEO Tim Cook also announced that the Apple Watch will ship in April, so it won't impact the current quarter. This should allow Apple to generate strong revenue and earnings growth in the June quarter, as it will benefit from the full wave of initial demand for the Apple Watch.

Growth is not over

Undoubtedly, Apple bears will fall back on the age-old concerns that the high-end smartphone and tablet markets will eventually become saturated and that replacement cycles will slow down.

There may be some truth to these arguments. But the saturation point has not arrived yet. Apple observed a record number of people switching from Android to iPhone last quarter, as well as a record number of "new-to-iPhone" sales overall. Even the iPad -- for which sales declined about 20% last quarter -- brought in lots of new users. More than 50% of iPad sales went to first-time buyers.

Meanwhile, the current iPhone replacement cycle has a long way to go, and growth in the overall user base should offset any slowdown in the typical replacement cycle. As for iPad, most users are still on their first one. There hasn't been a major replacement cycle yet. Whenever it occurs, it will be pure upside compared to Apple's recent iPad sales levels.

In short, Apple is firing on all cylinders. Despite its long-term growth potential, the stock trades for just 13 times-14 times Apple's likely fiscal year 2015 earnings. As Apple continues to prove doubters wrong in 2015, shareholders could be in for another year of strong share price appreciation.

Apple, Inc. Earnings: It's 2012 All Over Again @themotleyfool #stocks $AAPL Next Article
Current