Right now, millions of Americans are crunching numbers, sorting receipts, and sharpening pencils as they prepare to file their tax returns. As you look over your tax forms and the sometimes eye-popping amounts you've handed over to the federal government, you may find yourself wondering whether you pay more in income tax than the average American. 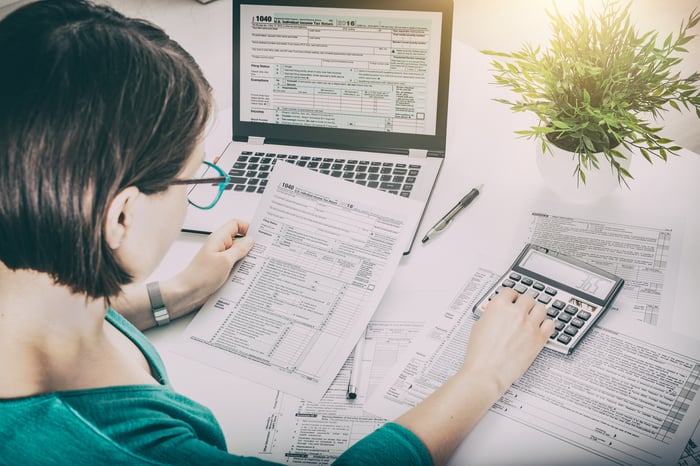 Tax payments are climbing
The economic recovery means that the IRS is collecting far more tax dollars -- and paying out far less in refunds -- than it did during the recession. How do you stack up?
According to the IRS, 146.24 million individual tax forms were sent in during 2013. Dividing the total amount of tax receipts collected from individual taxpayers (minus the amount of money returned to taxpayers in refunds) by the number of individual tax filers shows that the average taxpayer was on the hook for roughly $8,548.49.

However, you shouldn't take that comparison at face value. That's because averages can be misleading, given that tax brackets vary dramatically based on income. After all, many people owe no taxes at all, while the tax bill for high-income earners can be in the hundreds of thousands of dollars. That suggests that a far more useful way to compare yourself to the average taxpayer is to look at the group of taxpayers who earn rougly the same amount as you.

Fortunately, the IRS provides that data, too, but because the data is based on sampling, these estimates should be taken with a grain of salt. Crossing your T's and dotting your I's
If the amount of income tax you're paying is much higher than the income tax being paid by similar income-earners, it may be time to start looking more closely at potential deductions.

Those deductions may include everything from mortgage interest and student loan interest to miles driven to visit doctors and charities. Also don't forget to keep detailed records of everything you donate, as charitable donations are tax-deductible; even goods donated to nonprofit thrift shops like Goodwill can be written off. Other deductions that may lower your tax bill include the home office deduction, certain taxes paid to register vehicles, and even the cost of investment newsletters.

If you take all the deductions you think you can get and still feel you're paying more in income taxes than you ought to, it may be time to visit a tax professional to make sure you're not missing out on other tax-saving opportunities.