Community banks fear them. Big banks think they can crush them. But over the years, the credit union has proved resilient. And unknown to most people, credit unions thrive by writing car loans.

Credit unions have a storied history. They exploded in number and size during the so-called "Roaring Twenties" (1920s) by providing banking services to average Americans who weren't yet accepted by commercial banks. Back then, credit unions played a vital role in helping people save and borrow. Commercial banks weren't yet interested in opening savings accounts for, or lending money to, America's growing middle class.

To this day, credit unions still operate for the same goal -- providing savings and lending products to average Americans -- and they do so under the same not-for-profit structure that took shape in their formative years. Unlike banks, which are owned by investors, credit unions are owned by their members and account holders.

They aren't exactly banks. You won't find a credit union with investment banking operations, for instance. So credit unions, lacking in some of the revenue opportunities available to banks, have to be particularly careful about matching their assets (loans) with their liabilities (deposits).

And no product fits the credit union's needs like auto loans. Short in duration, and low in risk (during the financial crisis, people paid their car loans before their mortgages!), car loans are a staple of credit unions' loan books. 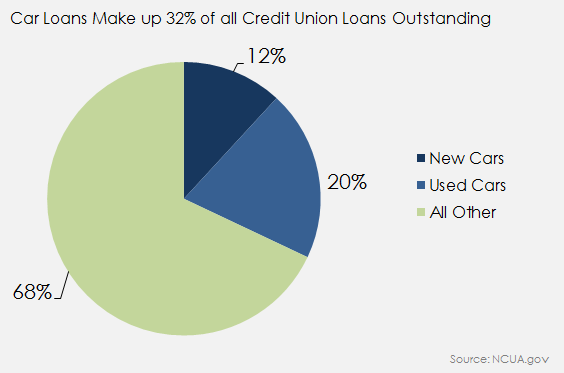 To win business, most credit unions price their auto loans at a fraction of the price that the nation's banks offer. It's not unusual for their rates to be 1%-2% lower than most for-profit banks.

How much can you save?
Knowing that credit unions compete aggressively for auto loans, I wanted to know just how much car buyers could save by using a credit union for their next car purchase. I found the recently reported average prices of $10,883 and $32,495 for used and new cars, respectively.

With these numbers in hand, we can quickly compare the difference in interest paid on the average car loan at the average rate for banks and credit unions using recent rate tables.

The result is the chart below, which compares the total interest paid on a car loan based on its amortization period and its source (bank or credit union). 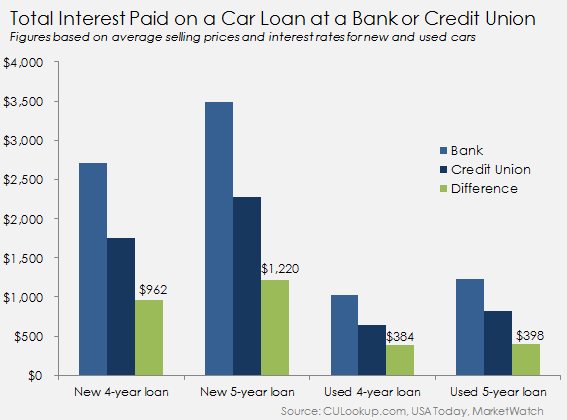 The differences are substantial. On average, used car buyers would save as much as $398 by using a credit union, while new car buyers who pick the lengthiest loan term would save the most -- $1,220.

The savings are due solely to the interest rate. Credit unions prefer short-term debt like car loans, so they're willing to lend at lower interest rates than banks. Banks, having weaker preferences for short- or long-term loans, don't have the same incentives to compete aggressively on car loan rates.

Of course, there are variables at play. Buying a more expensive car, or using a longer loan term, will naturally result in more interest over time. And if you're buying a new car, you can probably score a zero- or low-interest loan from the manufacturer, provided you have good credit.

But if there's one thing you should take away, it's this: Across the board, credit unions have much better auto loan rates than banks do. Over time, the difference can add up to serious savings -- savings worth shopping for.

Buying a Car in 2015? Here's Why Credit Unions Are Your Best Bet @themotleyfool #stocks Next Article
Current