Two constant refrains for Under Armour (NYSE:UAA) over the past several years have been regular increases in sales guidance, and then exceeding the raised guidance. In October, the company raised sales expectations from $2.98 billion to $3.03 billion for the full year, and based on past history of exceeding even the revised guidance, $3 billion in sales is probably an easy mark. With the company set to report its fourth-quarter results on Feb. 4, we'll know for sure soon enough.

Let's recap the year so far, and take a look forward as well. What can we expect, and what does it mean looking forward?

Phenomenal growth rate has two key drivers
Over the past four-and-a-half years, Under Armour has grown sales by at least 20% every quarter, but has really exploded over the past four, with revenue up at least 30% each period. This trend looks likely to continue when fourth-quarter earnings are announced.

The two biggest drivers of growth for now and the foreseeable future are footwear and international sales. Last quarter, footwear sales grew 50%, while total international sales increased a whopping 94%. Sure, it's not reasonable to expect these two segments to continue growing at such a high rate, but they are still very small pieces of the business:

As you can see, footwear and international sales are small parts of the business, but they are on track to become much, much larger.

Focus on innovation and marketing
It's hard to argue that Under Armour stock isn't incredibly pricey right now, based on most every valuation metric: 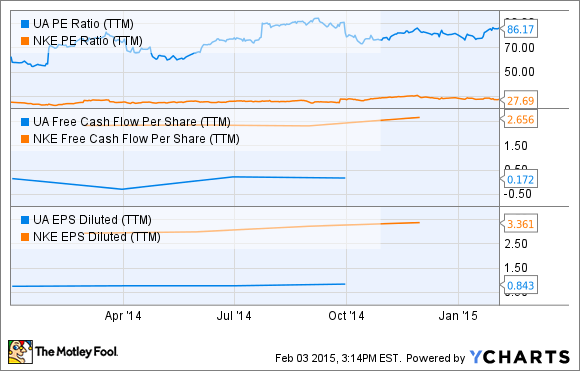 Under Armour's investments in product innovation and marketing are playing big roles in earnings growth lagging sales. Under Armour's gross margins are close to 50%, so it's clear that there are costs the company is increasing as the business grows larger.

The reality is, now is exactly the time the company should spend a larger percentage of revenues on marketing and product development. Even with all the growth in the past five years, Under Armour is an upstart in the global market, and must spend to establish brand recognition and market share.

Founder and CEO Kevin Plank has been abundantly clear that the company will "overspend" to market internationally. The target is 11% of revenue for marketing, but internationally the number jumps to 15% of sales.

Looking ahead
It's tough to know what an "expensive" growth stock like that of Under Armour will do in the short term, especially when its products are targeted at a consumer economy that still faces challenges in many parts of the world.

The earnings announcement on Feb. 4, quite honestly, won't be a "make or break" quarter, but the stock is likely to move up or down in a big way, based on the market's reception, and that volatility is almost certainly going to be an over-reaction one way or the other.

But taking the longer view, Under Armour -- the business -- is incredibly well-positioned, with a founder-led management team focused on some clear growth goals. Continued investments in marketing and product development will partly keep the stock "expensive", but they are most certainly the right moves for the long-term health of the company.

Long-term shareholders would be well-served to keep that in mind.