Motley Fool Staff
(the_motley_fool)
Few companies in the oil and gas space can boast of the stability seen at the integrated oil and gas companies -- aka Big Oil. These giants' vertically integrated business models, which range all the way from finding the next great source of hydrocarbons to filling your gas tank, provide an income stream that is far steadier than those of companies that only operate in one subset of the oil business.
That being said, not all of these energy stalwarts make great investments. Perhaps it is underperformance compared to its peers, or some issues with operations in a far-away land, or even the threat of government dabbling in your investment. So we asked our energy analysts for their take on which Big Oil giants should be avoided today. Here's what they had to say.
Jason Hall: Russian energy giant Gazprom OAO (OTC:OGZPY) is an easy choice, sharing many of the worst characteristics of other partially state owned oil companies, including heavy government ties -- in this case being majority owned by Russia -- and the economic uncertainty of operating in a country facing serious economic challenges.
I would argue that the second example is one of the biggest risks for Gazprom investors. The economic and political situation in Russia is as uncertain as it has been in decades, and quite frankly there's no clear end in sight. While Gazprom's gas production is enormous and only likely to grow in coming years, and the stock price has fallen to the point where there could be some value, it is hard to see the company getting past some serious headwinds in the near future. That's before we even talk about the effects of sanctions.
While the worst-case scenario -- the Russian government fully nationalizing the company and non-Russian ADR shareholders being left with nothing -- probably won't happen, there's no way to know how Russia's economic morass will play out. While some metrics might make Gazprom look cheap, there are far too many uncertainties surrounding the company and Russia. Stay away -- probably for a long time.
Matt DiLallo: I'd avoid Royal Dutch Shell plc (NYSE:RDS.A)(NYSE:RDS.B), which is is battling low oil prices and its own execution issues. The oil giant recently reported poor fourth-quarter results that were about 20% below what Wall Street was expecting. In one sense this poor performance was to be expected as oil prices plunged in the quarter. However, the company has been producing poor results for a while, and this past quarter's showing was actually an improvement over the fourth quarter of 2013 when results were punished by its weak North American shale business and poor refining margins.
The company has a history of underperforming. The following chart shows that its returns have been lower than Big Oil brethren ExxonMobil (NYSE:XOM) and Chevron (NYSE:CVX) for most of the past decade. 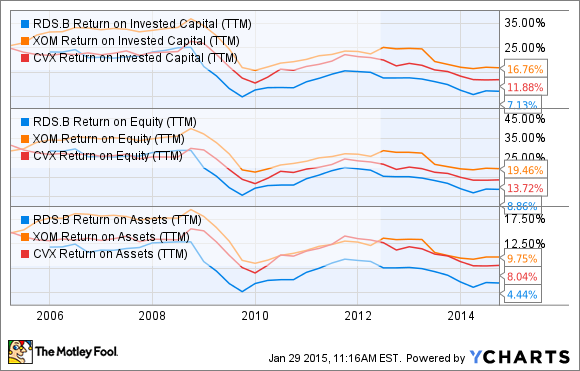 The company seems to have trouble making good money on oil and gas drilling, and its costs have taken a chunk out of its returns. Shell's U.S. shale business, for example, has missed the sweet spots of most plays. Meanwhile, it has invested $5 billion to drill for oil in offshore Alaska, but has yet to find a drop and plans to keep searching, and spending money, until it does.
The stock isn't a screaming value, either. Its valuation is in some cases higher than peers that have earned better returns in recent years, as shown in this chart. 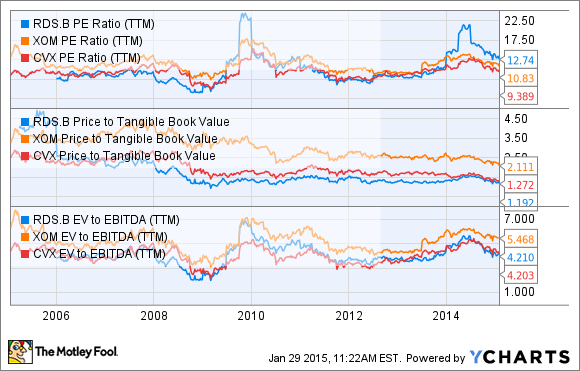 There are simply better Big Oil stocks to buy right now.
Tyler Crowe: Somewhere in my brain I can hear the value investor in me saying, "Take a look at Petrobras (NYSE:PBR.A)(NYSE:PBR). It's trading at an absurd P/E ratio of four." But as tempting as it might be to buy a company that has the government-mandated inside track on one of the great oil finds, I still can't shake my worries about this company.
Even setting aside the multibillion-dollar kickback scandal that could result in a shake-up of the entire executive suite and board of directors, there are just so many structural things to not like about Petrobras.
Since Petrobras straddles that line between being a publicly traded company and being partially owned by the state (in this case, Brazil), some things it is forced to do aren't exactly what you would want from an investment. For one, the company is forced to sell gasoline and diesel at subsidized prices established by the government, rather than at market prices. This mandate is compounded by the fact that Petrobras doesn't yet have the refining capacity to meet all its domestic fuel needs, and is forced to buy gasoline and diesel at market prices and then sell them at subsidized prices. This situation will improve as many of its new refineries come online, but the process will take time.
The other thing that makes Petrobras so risky is its exposure to foreign exchange rates. As a Brazilian company with few assets outside the country, almost all of its revenue is in local currency, the Brazilian reais. This means two things: 1) dividend payments, which are always a percentage of net income instead of a fixed amount set by management, are paid in reais; and 2) It has more than $100 billion in debt -- about 33% of total debt load -- that is denominated in U.S. dollars. With the dollar strengthening compared to the reais by close to 75% in just a couple years, those debt payments will grow and those dividend payments will not look as lucrative.
With so much oil at its fingertips and a corporate restructuring that has drastically cut costs and improved income numbers in the past couple years, Petrobras can look tempting. However, with so many issues related to its position as a semi-publicly owned company and with all its income in a currency that has lost strength to the dollar for years, Petrobras looks more like a value trap than a value investment.