What: Oilfield services provider Pioneer Energy Services Corp (NYSE:PES) stock is up more than 12% as of 12 PM EST on February 9. This is just another volatile day for this stock, which has had at least eight single-day moves up or down more than 5% already in 2015, with at least four of those days seeing the stock move more than 10% up or down.

So what: There isn't any specific news out there related to Pioneer Energy, so it's hard to really say what's moving the stock. However, investors should consider that Pioneer's core business is drilling and servicing land-based oil wells in the U.S., and this business is likely to be the segment of the oil and gas industry that is hardest hit in 2015. According to Baker Hughes, there are 315 less oil rigs operating in the U.S. than there were one year ago, with the count falling by 87 in the past week alone.

Now what: At one point in 2014, Pioneer Energy Services stock was up 125%, before collapsing along with the price of crude oil. Even after rallying 35% since mid-January, the stock is still down 28% from the beginning of 2014, and well off its high from last year: 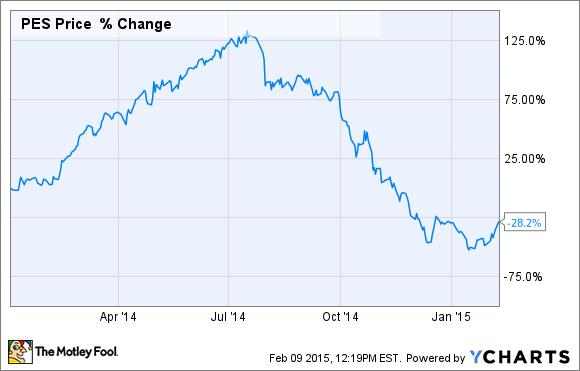 Most importantly, Pioneer's business will be under heavy pricing and competitive pressure in 2015, as the 21% decrease in oil rigs so far this year demonstrates. Not only will there be less work, the increased competition for that work will impact pricing and profits for the entire industry. The company has increased its cash position while reducing debt in the past year, so its margin of safety is improved, and it does have a base of long-term contracts that provide some revenue certainty.

However, it's still very early in the industry's shakeup of production and drilling activity, and that means Pioneer's business will continue to face a lot of uncertainty over the next several quarters. And that means the stock will remain one of the most volatile in the industry. Looking over the long-term, domestic oil production is expected to remain robust for years to come, but 2015 will be a shaky ride for investors in drillers like Pioneer.