What: Shares of rare-earth mineral miner Molycorp (NYSE: MCP) reversed a big gain during the past week and dropped 18% late in trading today.

So what: Yesterday's rally was driven by a jump in rare-earth mineral prices as data from the Association of China Rare Earth Industry showed an 8.4% increase in prices from a record low in 2014. Today's move looks like a reversal of that on 2.5 times the average daily volume.

Higher prices may be good for Molycorp, but it doesn't mean the company will be anywhere near profitability, or worth owning for investors. You can see below that Molycorp has lost hundreds of millions of dollars during the past two years alone as it has ramped up production, and there's little hope the company will dig out of its current hole. 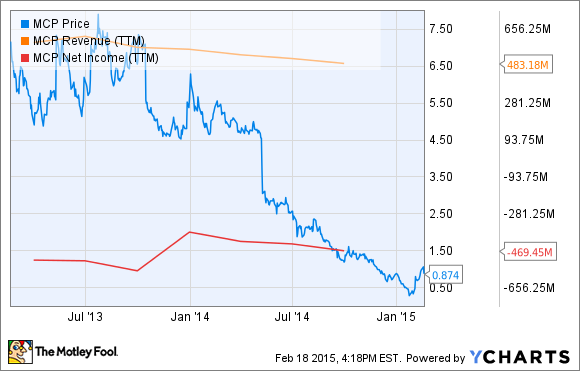 Now what: I've been saying since 2011 that the rare-earth mineral business is a terrible one to invest in, and Molycorp may soon be facing bankruptcy. In the first nine months of 2014, its operations burned through $146.4 million, and had just $313.5 million in cash on the balance sheet. That's a recipe for disaster, especially with a stock price so low that a capital raise is basically out of the question. I'd stay far away from this stock now and in the future.