I must admit that these days, it's difficult to have a lot of faith in Intel's (NASDAQ:INTC) mobile efforts. It has taken far longer than I had expected for the company to roll out competitive products, and competitors such as Qualcomm (NASDAQ:QCOM) and MediaTek have proven far fiercer than I had previously expected. While I'm still hopeful that Intel can eventually pull it together in the mobile processor business, I think it's prudent for more conservative investors to evaluate Intel from a "worst-case" scenario with respect to mobile.

What do I mean by "worst case"? Suppose that Intel never really delivers the kind of product leadership in mobile that potential customers are looking for, and that the company doesn't wind up capturing a significant portion of the revenue/gross profit dollars available to it in the smartphone and tablet markets. In that case, is Intel still a compelling investment at approximately $34 per share?

In a prior piece, I did a basic analysis of where I thought Intel stock might be headed by 2018. In a nutshell, if Intel is able to just wipe away its mobile losses and keep the rest of its businesses flat by 2018, then I think the stock could have upside to $44-$45 per share.

However, it's worth taking a look at Intel's potential 2018 financials from another angle. Let's suppose that Intel's mobile group is still not executing by 2018, and it's still losing money, albeit less money than the $4.2 billion lost in 2014. The company guided to $3.2 billion in losses in 2015, and I think that by 2016, those losses could come down by another $1 billion. However, in this scenario, after Intel picks the low-hanging fruit to get its mobile losses down to $2 billion, imagine that mobile gets no better for Intel from there.

In that case, it would be up to Intel's other business units to drive revenue and profit growth. 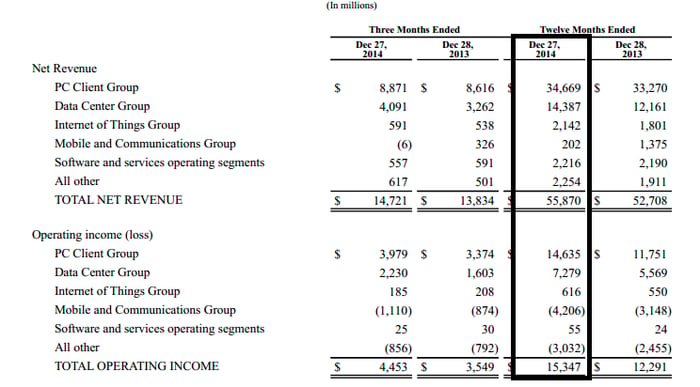 Intel has indicated that it expects to grow its data center business at a 15% compounded annual growth rate through 2018. The company has also signaled that "over time," it hopes to have its PC Client Group grow at low single digits -- let's call this 2%. The company has also made it clear that its Internet of Things group is a fast grower, and I feel very comfortable assuming a 15% revenue/operating income growth compounded annual growth rate for this business through 2018.

The software and services group actually contributes more than $2 billion in revenue today, but its operating income is pretty minimal. I want to be conservative here, and model in a revenue and operating profit growth compounded annual growth rate of just 5% through 2018.

The "all other" segment includes Intel's NAND flash business, but it also includes other initiatives such as foundry, as well as a whole suite of other expenses. It's hard to get a read on where this will be in 2018, but I think if we assume some foundry business -- although I wouldn't be comfortable assuming a lot of foundry business -- and continued NAND flash growth, the revenue could move up, and losses could come down meaningfully.

If we put this all together, then -- under these assumptions -- Intel could generate $72.65 billion in revenue, and could have operating income of about $25 billion by 2018. If we assume a tax rate of approximately 28%, then this implies net income of $18 billion.

Apply a 15 times earnings multiple to that, and this yields a market capitalization of $270 billion, or about $56.8 per share based on today's share count. The share price could be higher if Intel's buyback program is successful at reducing the shares outstanding significantly from today's levels.

While I really would like to see Intel succeed in mobile, if this analysis is correct, then success there isn't necessary for the stock price to move significantly up by 2018. However, there are a lot of assumptions that underlie this price target, so this is by no means guaranteed. This is just how I, as an Intel investor, am thinking about it.

Even Without Mobile, Intel Corporation Could Rise 64% By 2018 @themotleyfool #stocks $INTC $QCOM Next Article
Current