Despite increasing competition, Netflix (NASDAQ:NFLX) has been the leader in the streaming space for years. Beyond offering content from the big cable networks like CBS and Time Warner, Netflix began producing original content a few years back -- and the consumer response has been impressive. Netflix is now competing with the big studios at their own game. Since the company started its original series focus in 2012, it has gained 45 Emmy, 10 Golden Globe, and two Academy Award nominations for its shows.

But in the true spirit of competition, Netflix has a formidable foe challenging its dominance, particularly in the original content business among streaming services. Amazon.com (NASDAQ:AMZN) is amassing a wide audience by offering video streaming through its popular Amazon Prime service. The company is also starting to invest heavily in original content.

This has some investors wondering, can Netflix stay ahead of the game here? Or will Amazon, thanks to a much bigger budget, more resources, and a bigger overall consumer base surpass it?

Netflix: the original winner on original series
In the past years, Netflix has scored big with its House of Cards original series, which has earned a 96% positive audience rating on RottenTomatoes.com. Its Orange is the New Black original series has also garnered widespread viewership and acclaim. So with two big hits under its belt, Netflix aims to duplicate these successes by producing a growing amount of original content.

With each original, we learn more about what our members want, about how to produce and promote effectively, and about the positive impact of originals on our brand.   Ted Sarandos -- Netflix Chief Content Officer

Netflix's new Marco Polo series is a recent example of how the company plans to continue winning big with original content. Released last December to rival HBO's Game of Thrones, the series has already earned a 93% positive audience rating on RottenTomatoes.com.

And the excitement doesn't stop there. In 2015, Netflix plans to release 320 hours of original content, which is three times as much as in 2013 and will include movies, documentaries, and stand-up comedy specials. 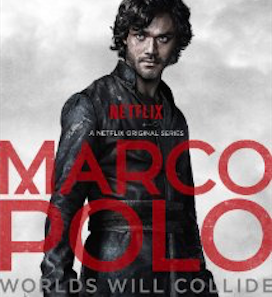 Can Amazon catch up?
Amazon started to heavily invest in its own video streaming service in 2013 when it released the service free of charge to its Prime members, who pay $99/year for free two-day delivery among other perks. Thanks to its larger existing subscriber base, Amazon could position itself as Netflix's number one foe.

Amazon has around 40 million Prime members, which roughly equals the number of Netflix's U.S. subscribers. And while it's estimated that only about 70% of Prime members use the Prime Instant Video service, this number is growing as a result of Amazon pushing its service onto existing customers while gaining new Prime customers.

It's true that Amazon doesn't currently offer the same breadth of movies and shows available to stream as Netflix does, but it has the advantage of a larger budget which can help increase the amount of shows it eventually offers. Because Netflix's largest costs are licensing fees paid to stream content produced by other media companies, the company announced on Feb. 2 that they are taking on $1.5 billion in new debt mainly to focus on new content. Amazon, on the other hand, already has enough cash from its main business operations to avoid this kind of scenario.

Bosch --  An Amazon original that is being heavily marketed now. Photo: Amazon.com

Amazon is getting creative
So far, none of Amazon's original series have performed as well as the big hits from Netflix, but the company is positioning itself for battle. Last year, Amazon ordered six other full series, including some from big name writers like Chris Carter who originally did the X-files series. Amazon even won two Golden Globe awards this year for Transparent, a comedy/drama (read: ComDrom) series starring Jeffrey Tambor.

Amazon is also giving viewers more control and letting their audience decide which series will likely be most profitable. For instance, Amazon recently released a series of pilot episodes (free to view for anyone, not just Prime members) in which viewers vote on the pilots that should become full series.

Foolish takeaway
It's hard to say if Amazon's original content can outperform Netflix's original hits; it takes more than just money to make shows that consumers really love. Yet, money is a critical factor in entertainment success, and Amazon has a lot more cash to play with than Netflix.

For Netflix investors, original series are definitely a boost to the company's long term strategy and potential, but beware that there will be competition. Netflix will have to race to keep innovating if it wants to stay on top.

Amazon's Preparing to Battle Netflix on Original Content, But Who Will Win? @themotleyfool #stocks $NFLX $AMZN $VIAC Next Article
Current