On the heels of a somewhat disappointing fourth-quarter report, shares of American Tower (NYSE:AMT) dropped about 1.6% in Tuesday's trading session. The stock is back down to levels not seen since, well, Friday. Here's why I think that's a reasonable (lack of) reaction to a mild analyst consensus miss, and why I'd be a buyer of American Tower right now if I hadn't already built a comfortable position.

The wireless tower operator's total revenue rose 11% year over year to land at $1.05 billion. That's just ahead of the analyst consensus at $1.04 billion. On the bottom line, earnings surged 68% higher to $0.42 per diluted share. However, analysts were expecting earnings to double year over year, setting their consensus target at $0.50 per share.

So, it looks like a pretty straightforward earnings miss paired with acceptable sales. But then you're ignoring a couple of factors that repaint this quarter in a far more favorable light.

Chiefly, I'm talking about the soaring value of the U.S. dollar. That may sound like good news, but it's not.

When currencies attack
For a multinational company like American Tower, which collected 33% of its revenue from abroad in the fourth quarter, a rising dollar puts a damper on sales and profits. The money you take home from abroad simply becomes worth a little bit less before hitting the income statement and balance sheet.

The dollar has jumped 12% higher versus the Brazilian Real in the last month alone, and about 25% higher across the just-reported fourth quarter. It's an extreme example, sure, but not very different from the currency exchange situation in important markets like Mexico or South Africa. Even the mighty euro, which ties into American Tower's 1,000 German tower sites, is plunging in comparison to the dollar. These currency trends add up to a powerful headwind against American Towers' financial reports.

Back at home
Moreover, the domestic market is presenting its own roadblocks to growth.

American wireless networks have been digging deep into their pockets to roll out 4G LTE networks over the last several years. That push is largely ending now, as the industry starts casting faraway looks at the next generational leap into LTE Advanced. 2015 is likely to become a dead spot in between these two large building phases.

In fact, the slowdown has already started. American' Tower's domestic growth in the fourth quarter dropped into single-digit percentages, far slower than the full-year U.S. revenue growth rate of more than 20%. In particular, AT&T (NYSE:T) is slowing down after a tremendous amount of infrastructure investments in 2014. 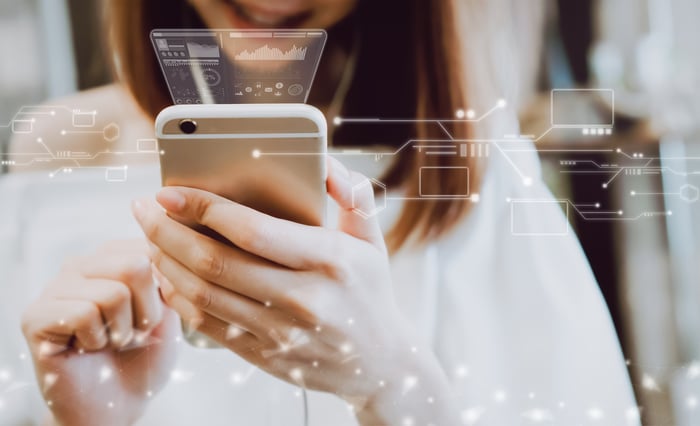 "It was an outside, probably record year for mobile spending," said American Tower CEO Jim Taiclet on the earnings call, referring to his business from AT&T. "In this year, 2015 is the more normalized year for AT&T and also still robust."

Against that backdrop, I'm mighty impressed that American Tower still pulled out an 11% revenue boost that left analysts fully satisfied on the top line.

What's next?
Looking ahead, American Tower's management expects the difficult currency situation to continue, but still expects to grow its core sales by 12%. That figure does not take several pending buyouts into account, though they should all close in the first half of the fiscal year.

The company doesn't offer guidance for earnings per share, so the fourth-quarter earnings miss was strictly against the best guesses of Wall Street analysts. It's kind of hard to get seriously disappointed about a 68% earnings jump when management hadn't promised anything of the sort.

At the end of the day, American Tower absolutely crushed its own expectations for fiscal year 2014. I'm also genuinely impressed by the results recorded at the end of a challenging year, and kind of excited about the payoff in 2015 and beyond from American Tower's recent buyout spree.

American Tower is still a great company that dominates an important growth market, with a large side order of international growth to boot. This report may have unlocked a small discount on the stock, but it did absolutely nothing to discredit or undermine American Tower as an investment.

I'd still be an American Tower buyer today, and maybe you should be one, too.

Why American Tower Corp Is a Buy, Even After Disappointing Earnings @themotleyfool #stocks $AMT $T $AAPL Next Article
Current