After rising steadily for most of the past year, shares of Republic Airways Holdings (NASDAQ: RJET) sank more than 14% on Wednesday. Clearly, investors were not impressed with the company's fourth-quarter earnings report and its guidance for 2015. 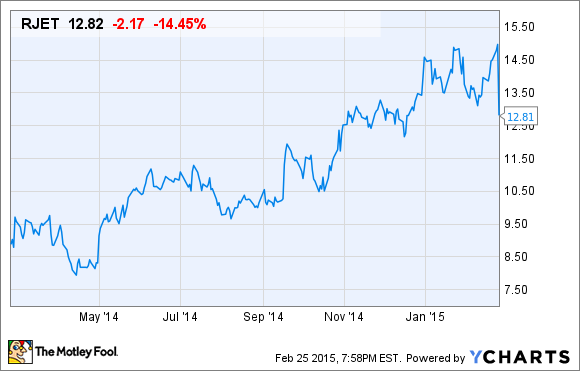 However, investors are seriously overreacting to what was a fairly solid performance. With Republic shares now trading for less than $13, the stock could be a good buy for value investors who are willing to ride out some potential volatility over the next two years.

Solid 2014 results
Republic Airways achieved adjusted earnings per share of $1.40 in 2014, up 24% year over year. Including some one-time items -- mainly related to writing down the value of aircraft that Republic intends to divest in the next year or two -- EPS was $1.24.

Headwinds on the horizon
Republic Airways' 2015 earnings guidance was probably the main reason investors dumped the stock. The company's first-quarter and full-year guidance both fell short of analysts' estimates.

For the first quarter, Republic projected EPS of $0.20-$0.25, down from $0.26 last year. Republic has endured another year of severe winter weather in the Northeast and Midwest, where its operations are concentrated. But this year it has also encountered an increased number of costly engine maintenance events.

For the full year, Republic expects EPS of $1.20-$1.50. The midpoint of the range would represent a year-over-year EPS decline. However, it's worth noting that Republic's guidance has historically tended to be conservative. (On the other hand, if Republic reaches a new contract agreement with its pilots, then costs could rise significantly.)

2015 is a year of transition
Investors should remember that Republic is in the midst of a significant fleet transition, and its current earnings power is not necessarily reflective of its long-term prospects.

Last May, Republic's management presented a plan to boost profitability by simplifying the business. In September, the company revealed a firm plan to transition to a single fleet type of Embraer E-170 and E-175 jets. This will allow it to concentrate on the most profitable part of its business while also streamlining operations.

In 2015, Republic Airways intends to dispose of its Embraer E-190s, which are used (sparingly) for charter service. It will also begin removing its 31 Q400 turboprops from service. While Republic through 2016 plans to remove more than six dozen aircraft that don't fit in with its future strategy, it will replace nearly all of these planes with new E-170 and E-175 contracts.

As various aircraft enter and leave the fleet in 2015 and 2016, and pilots are retrained to fly the E-170 and E-175, efficiency will suffer in the short run. That is a major reason that Republic does not expect much (if any) earnings growth this year. However, this disruption will allow the company to reposition itself for the future.

The future is still bright
By the end of 2016, Republic Airways should have reached its goal of standardizing on the E-170 and E-175. That will reduce costs by cutting down on training events, since pilots will no longer need to switch between different aircraft types at Republic. It also might allow the company to consolidate under a single operating certificate, reducing overhead costs.

As a result, investors who stick around until 2017 are likely to be rewarded with significant earnings growth as Republic finally reaps the benefit of its simplification initiatives. At that point, Republic Airways will be a much leaner, more-efficient competitor, focused on the most profitable part of the regional airline industry.