With the U.S. stock market hitting record highs of late and red hot sectors like health care sporting some jaw-dropping premiums, it's getting harder and harder to find stocks with compelling valuations. That being said, there are still a handful of small-cap growth companies worth checking out.

If we take a quick look at their projected earnings growth and valuations on a forward-looking basis, it's not hard to see why I'm optimistic about their potential to push higher:

Even so, these numbers can't, by themselves, provide much insight into these growth stocks. To do so, let's consider some of the major pros and cons of each company moving forward.

Ardelyx's research collaborations are key
Ardelyx is a small, clinical-stage biopharma that executed its IPO only last June, raising a tad over $60 million in cash in the process. The main reason to check this company out is its partnerships with pharma giants AstraZeneca and Sanofi.

AstraZeneca licensed out Ardelyx's NHE3 inhibitor, tenapanor, for three different indications (ESRD, CKD, and IBS-C). Per the terms of the deal, Astra will cover developmental costs and dole out some hefty milestone payments to Ardelyx.

Sanofi, on the other hand, licensed out the small molecule drug RDX002, indicated for a single disorder (ESRD), with the terms of the deal being broadly similar to the Astra collaboration, but on a smaller scale, given that fewer indications are being pursued.

What's key to understand is that Ardelyx has a relatively low cash burn rate because of these pivotal collaborations, and it is eligible for up to another $1.8 billion in milestone/sales payments going forward. The company is plowing these revenues back into its preclinical candidates, where it has retained all commercial rights so far.

The potential 'fly in the ointment', so to speak, is obviously that these lead clinical candidates could fail at some point in the tenuous clinical testing process, but the larger drugmakers' interest speaks to optimism about these drugs and their potential.

Over the last few years, the two companies have been at odds regarding EP-3102, given that it is a rival formulation to Teva's branded drug Treanda. Per the terms of the deal, Eagle is eligible to receive up to $120 million in milestone payments and double-digit royalties on net sales. Eagle's shares have absolutely torn higher since the deal was signed, shown by the chart below: 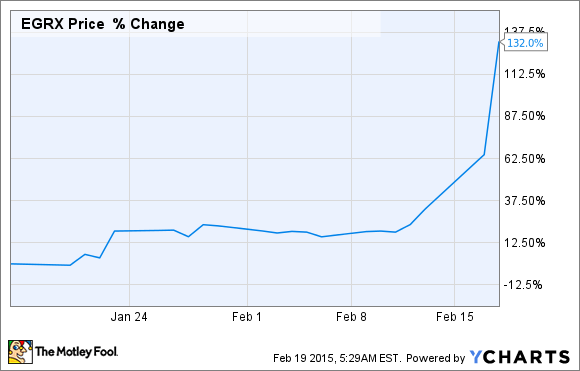 The potential downside is that the value of this game-changing deal may now be baked into the share price.

Flamel Technologies might be a risk worth taking
Flamel is an intriguing turnaround story that centers around management's decision to acquire Eclat Pharmaceuticals in 2012. This key acquisition has given the tiny French biopharma a far more diverse product and clinical portfolio, headlined by the FDA approval of Bloxiverz, the branded version of a common drug (neostigmine methylsulfate injection) used to reverse the effects of neuromuscular blocking agents during surgery.

Following a massive price increase last January to $98.75 per vial of Bloxiverz (up from $15.75 a few short months ago), the Street now expects Flamel's earnings to basically skyrocket this year (see Table above).

On the flip side, this radical price increase appears to reflect management's concern over the recent approval of a competitor's version of the drug, meaning that Flamel won't enjoy a monopoly in this market for long.

Going forward, this stock should remain on the volatile side until the revenue numbers are a known quantity. After all, this story has taken much longer to unfold than many analysts originally expected, which appears to be the main reason why Flamel's shares are trading at a steep discount, relative to most of its peers.

Mr. Market loves IGI Laboratories
IGI is a generic drugmaker that is growing by leaps and bounds due to an aggressive product development and acquisition campaign, led by dynamic CEO Jason Grenfell-Gardner. Since Jason became CEO in 2012, IGI's share price has gone absolutely bonkers: 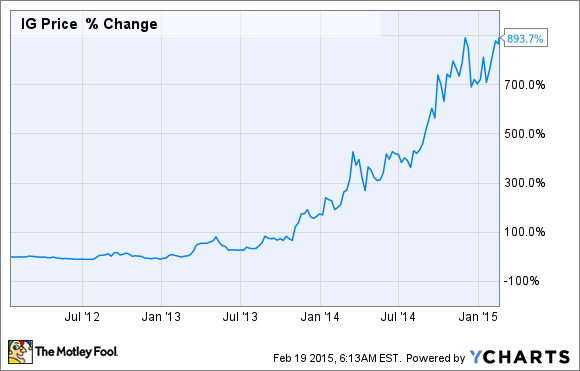 But for good reason. Specifically, this small-cap biopharma now sports 22 Abbreviated New Drug Applications, or ANDAs, on file with the Food and Drug Administration, and approximately 20 injected ophthalmic products acquired from AstraZeneca and Valeant Pharmaceuticals.

Although IG's shares look a tad overvalued at present from a forward p/e ratio perspective (see above), this simple metric doesn't account for future ANDA submissions or additional acquisitions that are certainly coming down the pike. That said, there is no guarantee that these regulatory filings will ultimately turn into commercial products, and the FDA's queue for ANDAs is notoriously long.

Pernix's restructuring is paying off
In 2014, Pernix underwent a dramatic face-lift. The company hired a new CEO Douglas Drysdale with deep background in pharmaceutical sales, acquired the U.S. rights to the migraine drug Treximet from GlaxoSmithKline, and relaunched the insomnia drug Silenor. The net result has been a huge upswing in earnings, revenue, and the value of its share price, shown below: 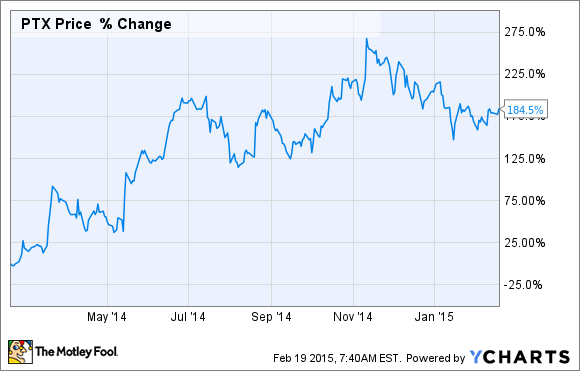 Despite this rapid appreciation in share price and its fundamentals, Pernix's stock still looks cheap based on its forward price-to-earnings ratio and huge revenue growth, suggesting that the broader investment community has yet to catch on to to this compelling growth story.

By the same token, Treximet's U.S. patent is set to expire in 2017, meaning that this rocket-like trajectory may not last for long.

Are any of these stocks compelling buys?
I personally like Eagle, IGI, and Flamel the best out of this group, and considered them all good buys at current levels. My outlook is based on one simple reason: they all offer long-tailed growth prospects with reasonable levels of risk. Ardelyx and Pernix, by contrast, may have more upside potential, but they also come with the higher risk profiles for the reasons outlined above. As such, these two stocks will remain strictly on my watchlist for the time being.