After succeeding in smartphones and tablets, ARM is gunning for double-digit percentage market share in two large chip markets.

ARM Holdings (ARMH) is the well-known processor intellectual property vendor whose designs power the vast majority of smartphones and tablets sold today. However, as these markets slow in growth, the company aims to tackle new opportunities. Two markets that the company has highlighted in particular are the networking processor and server markets.

Let's take a look at its ambitions within each segment, and what success there could mean for investors.

The networking opportunity is large, and ARM is eyeing a big share
According to an ARM presentation, which is based on both Gartner data and internal analysis, the networking infrastructure opportunity will consist of about 1.6 billion chips worth $18 billion by 2020. ARM is expecting that it will take 30% to 35% of this market by that time, which would be a sizable increase from the 10% share the company currently holds. 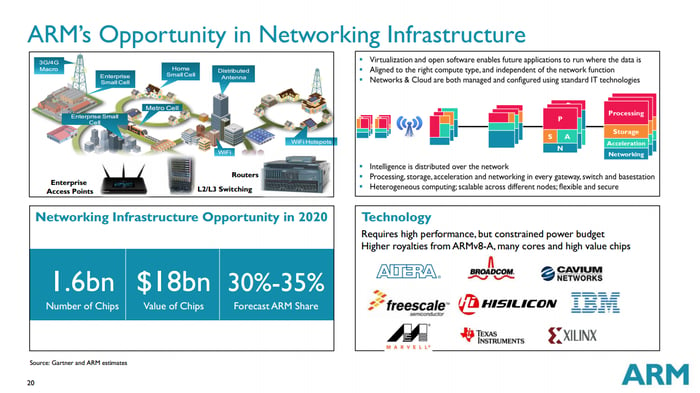 Of course, ARM is an IP licensor, so its share will be via partners, and its cut will likely be a low single-digit percentage of the selling prices of these chips. However, if ARM grows from 10% share of an approximately $11 billion market today (which ARM claims was actually a doubling of its share from last year) to 30% or 35% share of an $18 billion market in 2020, then that could be a sizable boost in royalty revenue for the company.

Aiming for relatively large server share, too
ARM is also aiming to grab about 20% of the server market by 2020. The company showed the following slide illustrating its expectations: 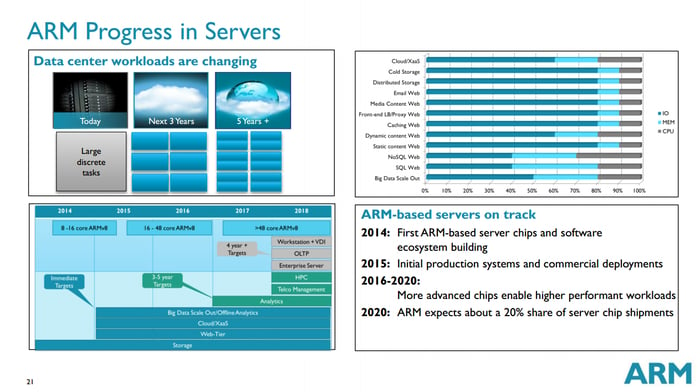 The company thinks that 2014 represented a year of "software ecosystem building" with 2015 bringing initial systems to the market. Then, between 2016 and 2020, the company expects that its partners will roll out more capable chips to address a broader range of workloads that require greater performance.

If the company can grab a 20% share by 2020, then this should represent another significant increase in royalty revenue. However, in order to actually take this share, ARM's partners are going to have to go up against the well-entrenched Intel (INTC 0.04%).

Is the server goal realistic?
One reason that I'd want to be careful before modeling in these aggressive server projections for ARM is the simple fact that Intel has bested many powerful competitors in this market over the years. Further, Intel seems to be quite paranoid about any potential threat to its server dominance and claims that it is investing $2 billion in data center-specific research and development alone.

Most of the ARM server players that have announced their intentions to compete in this market do not even generate $2 billion in annual revenue, which means that they necessarily invest at a far lower level than Intel does.

The common argument is that these various players will target specific niches that Intel might not have the resources to go after, but in that case, will those players have enough revenue to fund the significant upfront investment required to compete?

I would argue that the ARM partners with the best chances of success are those that already have significant chip scale from other, related markets. Qualcomm and Broadcom, should they choose to expand outside of networking into the general server market, seem to fit that bill.

Investing in the Internet of Things: A Beginner's Guide