3D Systems (NYSE:DDD) released its fourth-quarter and 2014 full-year earnings last Thursday, which showed a business that remains challenged to execute well across all of its segments. Consequently, a big question for long-term-focused investors may be whether these challenges are large enough to deter an investment, or if they'll eventually work themselves out and should therefore be ignored.

We took a quick look at 3D Systems' earnings here a couple of weeks ago, but investors could do better with some deeper insight. Let's crack open the full earnings report and do a deep dive. 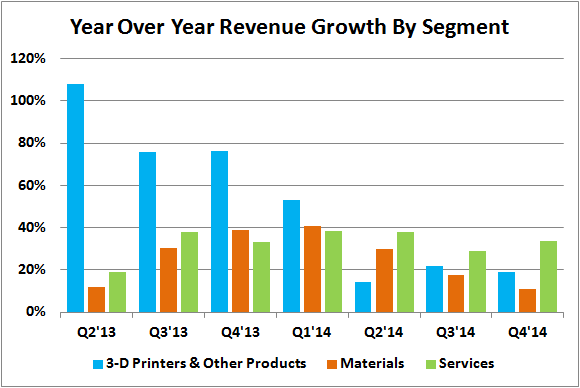 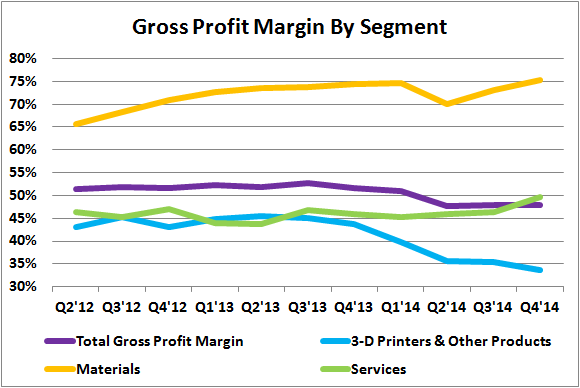 Management previously highlighted that printer gross profit margins would remain constrained while the company worked through a concentrated number of product launches and a manufacturing capacity build-out and expects  it will recover in future periods. However, investors should remain cognizant of the company's 3D printer gross profit margin going forward, because it may provide insight into whether the company may be experiencing pricing pressure headwinds as a result of increasing competition.

Rising expenses
3D Systems continued the aggressive pursuit of its market opportunity in the fourth quarter, with total operating expenses outpacing revenue growth by nearly 17 percentage points on a GAAP basis. As the chart below illustrates, the increase in spending came at the expense of operating and net income, but it's aimed at providing a bigger payoff in terms of profitability over the longer term: 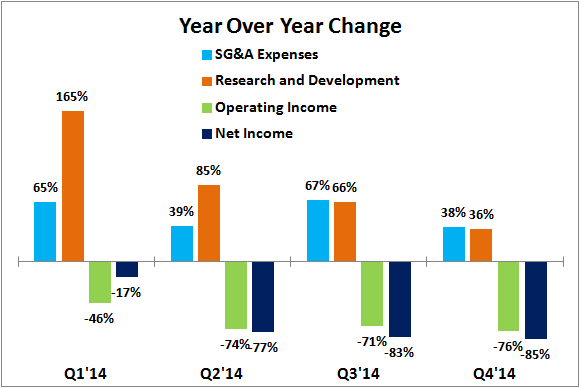 A new challenge emerges
A concerning development that surfaced during the quarter was that 3D Systems' North American segment performed poorly compared to other geographies, and weighed heavily on its organic growth rate -- the rate of annual revenue growth excluding acquisitions over the past year. 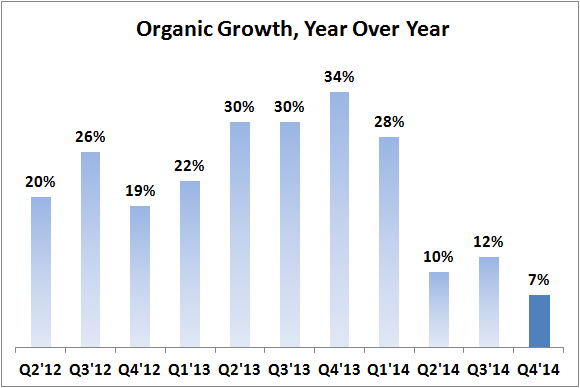 Management blamed the North American weakness on poor performance of its 3D printers that rely on jetting technology, which only increased by 9% year over year in terms of unit volume during the quarter. Comparatively, 3D Systems' stereolithography, selective laser sintering, and direct-metal printers experienced fourth-quarter unit growth of 356%, 89%, and 167%, respectively.

It's certainly possible that the weak performance in North America could indicate that 3D Systems' jetting printers are becoming saturated in the region, or may be falling behind competitive offerings. How this translates to regions where 3D printing is a less saturated technology remains a potential concern for investors.

Silver linings
In the fourth quarter, 3D Systems' consumer-facing revenues returned to strong growth -- increasing 68% year over year -- after a temporary pause last quarter, because of management's deliberate decision to delay the shipment of its consumer-oriented Cube 3 printer to improve the user experience.

The company's health care segment continued to shine, with revenues increasing 96% over last year to $42.8 million, further demonstrating that a clearly defined strategy in a specialized segment could positively contribute to superior operating performance.

With the help of a second manufacturing line that became operational during the quarter, direct metal printing revenue expanded by an impressive 178% over last year, and it should give the company ample capacity for the foreseeable future to meet customer demand. In other words, the ongoing issue where 3D Systems wasn't able to keep up with demand of its direct-metal printers should be largely resolved.

Strategically, 3D Systems will place a lower emphasis on M&A activity this year and instead focus its efforts on fine-tuning the numerous acquisitions it's made in recent years to deliver improved operational effectiveness -- an area that 3D Systems could improve upon.

Buy, sell, or hold?
Unfortunately, 3D Systems doesn't break out the percentage of its total revenue that comes from North America, but investors should know that it's big enough to drag down the company's organic growth rate. In other words, 3D Systems' North American performance shouldn't be taken lightly going into the future, because it appears to be a major driver of the business' overall performance.

Ultimately, investors considering buying shares today will have to look beyond the various challenges facing 3D Systems with enough confidence that management has the discipline and wherewithal to deal with challenges. It's certainly encouraging that 3D Systems appears to have resolved ongoing issues around its direct-metal printing manufacturing capacity and its consumer-oriented segment during the quarter.

However, as 2014 demonstrated with 3D Systems, a resolved issue doesn't necessarily prevent a new issue from emerging. Having a jack-of-all trades approach to its market opportunity may have its advantages, but it isn't an easy business model to execute.

Frankly, I remain concerned that complexity of 3D Systems' business model has too many points of potential failure, and buying the stock based on management's ability to resolve unexpected issues isn't a very compelling reason to get invested. Being an existing shareholder, I won't be adding to my position after earnings, and would seriously consider selling in the future if 3D Systems faced ongoing challenges that management couldn't seem to rectify.