Please ensure Javascript is enabled for purposes of website accessibility
Log In Help Join The Motley Fool
Free Article Join Over 1 Million Premium Members And Get More In-Depth Stock Guidance and Research
By George Budwell - Mar 5, 2015 at 8:09AM

AbbVie is reportedly buying leukemia-drug maker Pharmacyclics for $21 billion. Is this price too rich?

Illinois-based drugmaker AbbVie (ABBV 0.37%) is reportedly buying Pharmacyclics (NASDAQ: PCYC) for $261.25 per share, or $21 billion, to boost its oncology pipeline.

As the deal comes at a stately 40% premium to where Pharmacyclics' shares were trading prior to the company going on the market, and as the buyout is mostly for a single cancer drug (Imbruvica), I think it's important to consider if AbbVie is overpaying. To do so, let's dig into the details of this acquisition.

The deal
AbbVie and Pharmacyclics are expected to complete the merger by midyear, with 58% of the purchase cost being paid in cash and 42% in AbbVie common stock. According to AbbVie's press release, Pharmacyclics shareholders can opt for either a payout of cash, AbbVie stock, or a combination. AbbVie said it will finance the merger via new debt, cash, and stock.

AbbVie was reported to be the third in line for Pharmacyclics' hand, swooping in at the last minute to outbid Johnson & Johnson and Novartis AG.

Imbruvica's market opportunity
Imbruvica is currently approved as a treatment for four different blood cancers, had one of the strongest commercial launches among oncology drugs in recent history, and is undergoing clinical testing for several additional indications. If all goes as planned, the Street expects the drug to generate about $6 billion in peak sales by 2020, and it won't lose patent protection until 2026.

The bad news, though, is that 50% of Imbruvica's profits go to J&J through its licensing deal with Pharmacyclics. Boiling this down, AbbVie just paid $21 billion for a drug worth an estimated $3 billion, at peak, to its top line. Extending this reasoning a bit further, Imbruvica appears on track to generate about $25 billion to $28 billion total for AbbVie before it goes off-patent.

However, AbbVie also has a similar experimental drug, ABT-199, that could cut into Imbruvica's sales down the line, and oncology drug prices will probably come under significant pressure from payers in the not-so-distant future. Put simply, there is a good chance Imbruvica sales will take a decade or longer to cover the cost of this buyout.

Amazing drug, bad deal?
Imbruvica is, by all accounts, a game-changing cancer drug that is highly likely to gain numerous additional approvals. That doesn't change the fact, though, that AbbVie's management is paying a mind-boggling premium for its manufacturer.

Going forward, AbbVie might have to buy out J&J's rights to the drug -- in what would presumably be another multibillion-dollar deal -- and keep its fingers crossed that Pharmacyclics' other early stage/pre-clinical candidates (pictured below) pan out, simply to come out ahead. 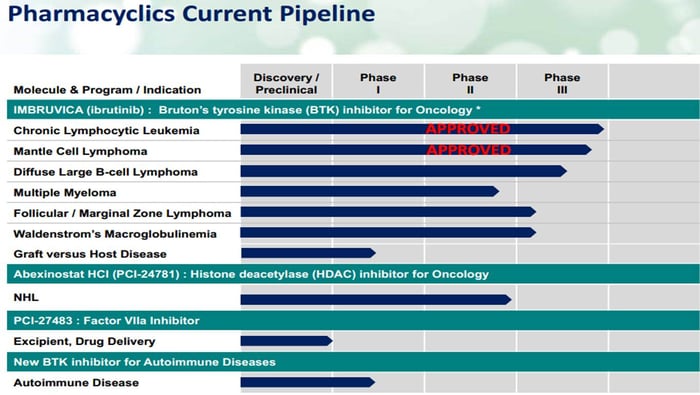 At the end of the day, this deal appears rather worrisome for AbbVie shareholders. AbbVie's management now appears to be more concerned about its biggest drug Humira's looming patent expiration than they have let on, and the company's new hepatitis C drug, Viekira Pak, doesn't look like a long-term growth product. Still, it's hard to see how the Pharmacyclics deal solves the company's long-term growth problems or creates much value for shareholders.

To be fair, the premium built into this merger is in line with the spate of other recent deals among pharma companies. But perhaps that's the real problem: drugmakers in general are garnering sky-high valuations that aren't based on their underlying fundamentals. And AbbVie's hand is being forced, at the worst possible time, to head off Humira's patent expiration in 2016.