Intel's (NASDAQ:INTC) low-power Atom processors, along with subsidies to manufacturers, have enabled the company to win a considerable share of the tablet market. Intel shipped 46 million tablet processors in 2014, beating its goal of 40 million by a considerable margin.

The year 2014 was only the beginning of Intel's plan to conquer the mobile market. At the Mobile World Congress earlier this month, Intel unveiled three new Atom SoCs, including the first 14nm Cherry Trail chips, and the first Atom chip with an integrated modem. Along with the higher-end Core M line of processors, Intel's mobile lineup now covers most types of mobile devices, from low-end smartphones to premium two-in-one devices. 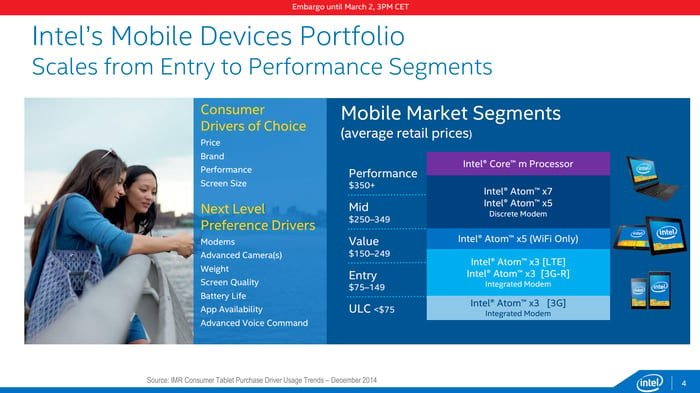 Intel's x3 is the lowest-end Atom chip announced by Intel, targeting entry-level smartphones and tablets. The x3 is a Bay Trail SoC built on a 28nm process from a third-party foundry featuring a Mali GPU, with the goal being to keep costs as low as possible. There are three versions of the x3 -- two with an integrated 3G modem, and one with an integrated LTE modem.

This is the first time that Intel has a truly competitive offering for smartphones, as previous mobile efforts have been aimed almost exclusively at tablets. While the x3 will likely show up mainly in low-cost Android devices, the mobile version of Windows 10 will also support the new chips, marking the first time an Intel chip will power a Windows Phone.

The x5 and x7, the other new Atom chips, are both Cherry Trail parts built on Intel's new 14nm process, featuring Intel's Gen8 graphics. These are aimed mostly at tablets and two-in-one devices. The first devices powered by the chips are expected during the first half of this year. Companies expected to launch x5 and x7 devices include all of the major PC manufacturers.

The x5 and x7 don't include integrated modems, instead relying on an external modem. Intel also introduced its next-generation XMM 7360 modem, which will pair with these new chips. The inclusion of an integrated modem matters more at the low-end, where bringing costs down as low as possible is critical.

What it all means
Intel's mobile segment posted a staggering $4.2 billion operating loss during 2014, thanks to Intel's subsidization of its tablet processors. The company expects to drive about $800 million in costs out of the mobile business in 2015. This is because, in part, the new low-end x3 processors, also known as SoFIA, don't come with any subsidies.

Profitability in the mobile segment is still a ways away, but Intel's mobile lineup is slowly, but surely, improving. One reason why Intel has failed to make any inroads in the smartphone market thus far was its lack of a chip with an integrated modem. The x3 changes that, giving Intel an opportunity to sell a large number of these low-cost chips.

In the tablet and two-in-one market, Intel holds a unique advantage. While competing ARM chips can power both Android and Windows Phones, only Intel chips can power a Windows tablet or two-in-one that's compatible with Windows desktop applications. AMD is a potential competitor in this area, also offering x86 chips, but so far, it has made essentially no progress in the tablet market.

Intel basically owns the Windows tablet and two-in-one market. With the upcoming release of Windows 10, which fixes many of the issues users have with Windows 8, an upgrade cycle could give a major boost to Intel's mobile business.

The only thing that Intel really lacks is a chip aimed at high-end smartphones. Going after the high-volume value segment first makes sense, but Intel will eventually need a competitor to Qualcomm's high-end phone processors. In the near term, flagship smartphones are unlikely to use an Intel chip.

Intel's foray into the mobile market has been a long and expensive journey, and the company is going to need to win a significant piece of the smartphone market in order to make it all worthwhile. SoFIA marks the beginning of this effort, and the higher-end Atom chips should help Intel maintain the tablet market share that it won in 2014.

When will this all be profitable for Intel? It's hard to say. But these new chips mark significant progress for Intel in the mobile market. If the company can continue to improve its mobile lineup, there's no reason why it can't eventually succeed.