A pair of tech manufacturers and a REIT are our dividend lifters of the week.

Dividend hikes were a hot topic in the markets last week. We have the Federal Reserve to thank for that, on the back of its annual bank stress tests. As part of this process, the Fed gets to approve the capital allocation plans of the nation's financial institutions, and it gave yays or nays to the dividend proposals of a host of such firms.

We'll leave the dividend hikes of the financials for other corners of this site, and instead concentrate on the less talked-about raisers here. The three that made it into this week's installment are:

Realty Income (O -1.41%)
When you self-identify as "The Monthly Dividend Company" you'd better keep spitting out those distributions. And raising them at least occasionally. Tick off two check marks for this sturdy real estate investment trust, which incrementally raised its payout by 0.3% to almost $0.19 per share.

Realty Income has kept its frequent disbursement going for over 20 years. It manages to do this with the over 4,300 properties that it rents on typically long-term leases to stable and well capitalized companies. That produces a reliable stream of income.

Fiscal 2014 was a good year for the company, with revenue advancing nearly 20% to $934 million, and net income available for shareholders increasing 12% to $228 million. The company benefited from a very active year for lease rollover, with over 200 properties transferring to new contracts (and in some cases, tenants).

In spite of this, the market hasn't shown Realty Income much love lately. It seems much of this has to do with fears connected to the Fed's anticipated interest rate rise (higher rates theoretically impact REITs mainly by increasing the costs of their funding, squeezing profitability). 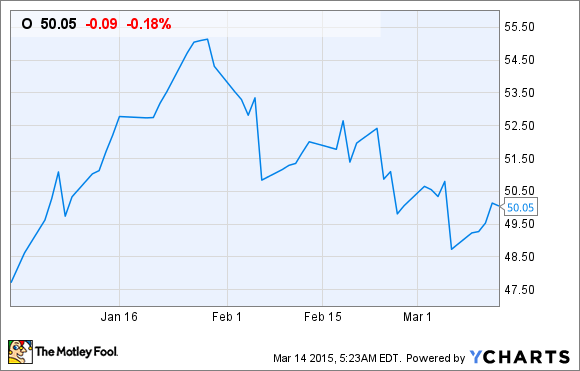 I'm not too worried about this. Realty Income's funding base is solid at the moment, and less than 10% of its total liabilities are comprised of variable rate debt vulnerable to a rate hike. I'm even less worried about the future of the dividend, which should continue to be fueled by those reliably long-term tenants.

Realty Income's enhanced monthly dividend is to be paid on April 15 to stockholders of record as of April 1.

Xilinx (XLNX)
As a group, tech manufacturers aren't known for their dividends. The sector is, after all, rather capital-intensive in terms of both research and development, and production. This semiconductor maker is an exception -- it's paid a consistently rising quarterly distribution for over a decade. Last week it boosted that payout by 7%, or $0.02, to $0.31. 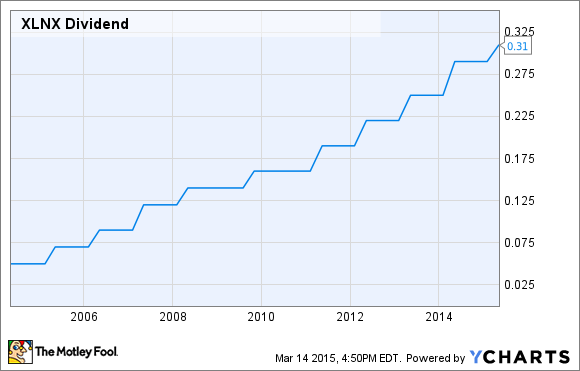 Xilinx might have done so more by force of habit than anything else, though. Its fiscal Q3 2015 saw revenue that was stagnant on a year-over-year basis (landing at $594 million), and a net profit ($169 million) down 4%. The company attributed this to "disappointing sales from broadcast and communications end markets."

Going forward, the company apparently doesn't expect those segments to improve to any great extent. It's forecasting a dip in sales of 2% to 6% on a sequential basis for Q4. It didn't give a projection for net income, a fairly discouraging sign.

Yet zooming out a little reveals that over the years, Xilinx has been a good performer, if not exactly a model growth stock. It's managed to keep its gross and net profit margins high, a habit that keeps cash flowing at a healthy rate into the business. The company's free cash flow is typically several times higher than what it pays out in dividends.

In light of that I'd say that it's a fairly conservative company that manages its cash well. Its dividend, then, looks sustainable to me.

Xilinx will dispense its next payout on June 3 to shareholders of record as of May 13.

Qualcomm (QCOM -1.38%)
Speaking of dividend-paying tech gear makers, this high profile chip maker is lifting its quarterly payout by 14% to $0.48 per share. It's also authorizing up to $15 billion in share repurchases, up from the remaining $2.1 billion of its existing program.

That somewhat dampened the encouraging results from the firm's estimates-beating Q1, which was driven to no small degree by the strong sales posted by Apple, a well performing and solid client. 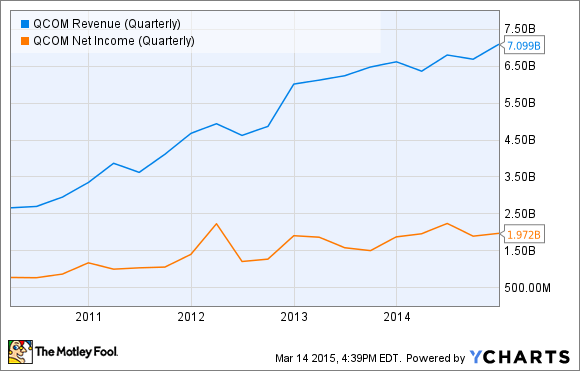 The shave in guidance is due to the company's anticipation that a "large customer" -- almost certainly Samsung -- won't be using Qualcomm's Snapdragon 810 chip for its next big product. Additionally, Qualcomm anticipates it will continue to struggle on the potentially lucrative Chinese market.

The company says it will finance the capital return initiatives largely through debt, a slightly worrying development. Looking at the company's financials, though, we can see that -- like Xilinx -- it's throwing off plenty of cash, and its got the dosh to more than cover its dividends.

I feel the company's new payout will be sustainable, and even a candidate for increase, in the near future. But investors should track how much debt the firm takes on, and to what degree this impacts overall financial health.

Qualcomm has not yet nailed down the dates for the first installment of its raised dividend, saying only that it will start distributing the new payouts after March 25.

Eric Volkman has no position in any stocks mentioned. The Motley Fool recommends Apple, and owns shares of Apple and Qualcomm. Try any of our Foolish newsletter services free for 30 days. We Fools may not all hold the same opinions, but we all believe that considering a diverse range of insights makes us better investors. The Motley Fool has a disclosure policy.

7 Dividends That Have Doubled Quickly