General Electric's (NYSE:GE) biggest problem today isn't a sluggish global economy. Nor is it low-cost foreign competitors or a bloated banking business. All of these challenges have proven manageable, if not ideal.

Instead, an obstacle that's stymied GE has been clear and effective communication with its investors. While CEO Jeff Immelt and his team have righted a ship that nearly sunk in 2009, their efforts have been ignored by the market. GE's stock has lagged, and it is currently priced at a 10% discount: GE's price-to-earnings ratio is 16.8 compared to the industry's 18.8.

In response, GE is taking steps to bridge that communication divide. With its latest annual filing for investors -- the SEC report known as the 10-K -- GE has spruced up what's typically been a tedious, lengthy read. The overview section uses language the average investor can understand, connects its strategy to financial results, and paints a clear picture of this complex conglomerate. Investors will still need a basic financial toolkit to dive into the footnotes, but GE's revamped filing opens the door to more transparent financial reporting.

A much-needed makeover
The 10-K required by the SEC has long been the most important document investors should consider before buying stock in a public company. It gives a recap of the year that just ended, includes audited financial statements, and touches on management's strategy for the future. But it's also been one of the least user-friendly documents imaginable.

One major drawback of a typical 10-K is its length, which can stretch for more than 200 pages. And the language is frequently a headache-inducing blend of industry jargon and legalese. What's worse is when a company attempts to selectively disclose trends and highlights graphically. Such efforts often devolve into slick pages that read like a well-crafted marketing message.

By working closely with the SEC, GE's finance team has avoided some of these pitfalls. Its 2014 10-K was released on March 2, and it builds on the approach GE has taken in improving its quarterly earnings release and a recent proxy statement. It's organized in a top-down manner, giving a view of the business from 20,000 feet, and then drilling down into each of GE's eight core business segments.

Here's a look at the introduction and summary page that introduces the synopsis of GE's 2014 performance: 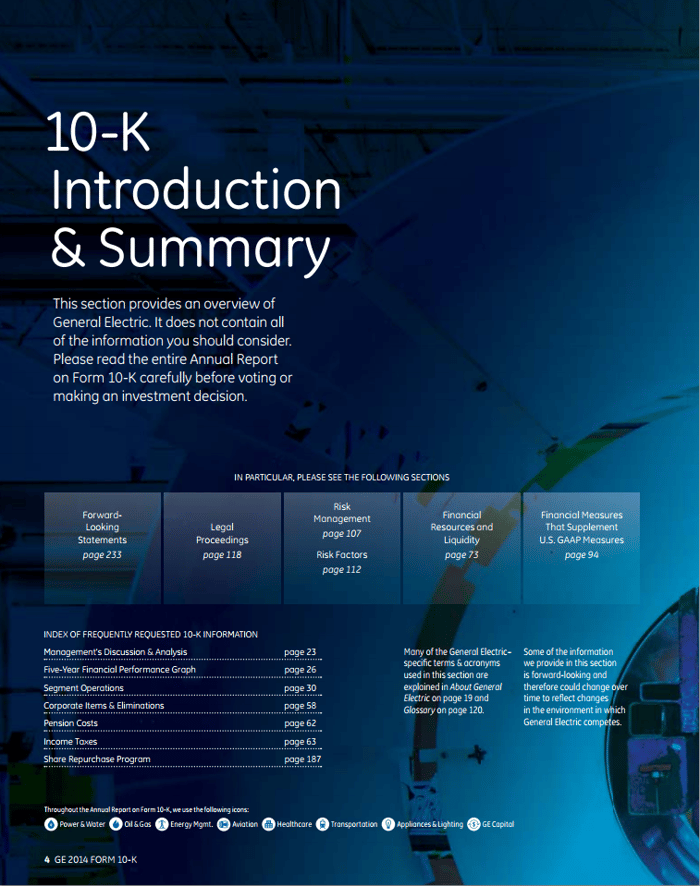 And here's page seven of the report, which provides a summarized argument for GE's conglomerate approach and an overview of its power and water business: 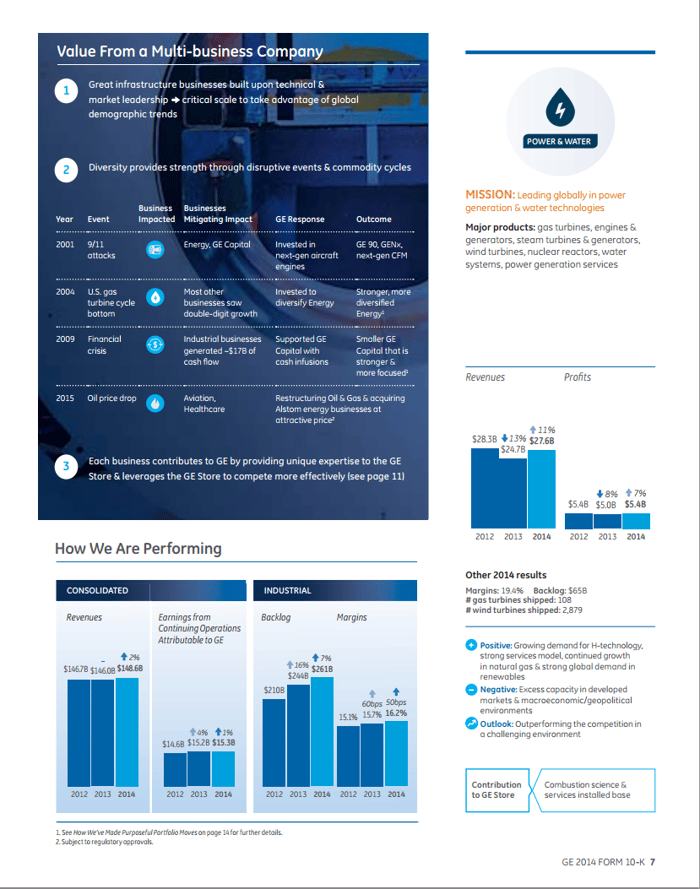 The introductory section is particularly useful because of GE's size and complexity. Providing an overview of how the company is performing becomes a whole lot simpler when you can separate things like banking from manufacturing and isolate individual units from the company as a whole. GE does this effectively and gives attention to both the highlights and pitfalls that arose in the past year. And for those looking to build a financial model for valuation purposes, this report provides a much better starting point than those of years past, which failed to clearly separate the businesses.

The advantages don't begin and end with colorful graphics and better data visualization. As mentioned before, part of GE's intro reads like an argument that justifies the conglomerate form as opposed to a hodgepodge of stand-alone entities. And this should not be overlooked.

If there's one thing that seems to be nagging GE's stock price in recent years, it is investors' misunderstanding of why GE Capital is still around, and why GE clings to many seemingly disconnected industries. GE addresses these concerns by spelling out the "mission" for each business unit, delving into the "positive" and "negative" developments in each industry, and predicting the future "outlook."

In other words, it provides information about each business as though it actually were a stand-alone entity, making it easier for an investor to understand its strategy and competitive edge. GE then ties all of these together to what it calls the "GE Store." A segment's contribution to the GE store justifies its existence in the portfolio. Whether it's speed-to-market, a connection to big data, or the ability to upsell services, each business should strengthen GE's overall position in the market, and vice versa. 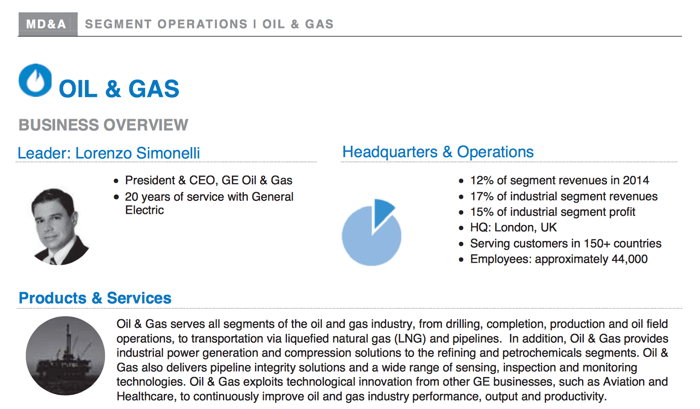 As GE's CFO Jeff Bornstein puts it, this overhaul of the report is "more strategic, better aligned with the way we talk about the company on our earnings calls, and much easier to read." In addition, it lays out management's goals in simple terms without obscuring their projections. This should make it simpler for shareholders to gauge management's performance and ultimately hold leadership accountable.

But GE's colorful new report is not without drawbacks that investors should be aware of.

Why you need to stay skeptical
While it's a much-needed improvement on a generic filing, GE's 10-K also has its pitfalls. Investors should be sure to consume the information with a grain of salt, read between the lines, and pay respect to other cliches of this nature.

As the co-chief investment officer of OakBrook Investments LLC said to The Wall Street Journal in regard to GE's new 10-K, "You want to go past the pretty pictures and go to the financial statements at a minimum and then to the footnotes. It's not bad, but I don't think it enhances my ability to analyze or use the report."

Of course, all retail investors are not seasoned Wall Street analysts, either. For the average reader, the report just became a whole lot less intimidating. It now tells a story that flows more naturally into the nitty-gritty financials and footnotes that are still of utmost importance. Some of the legwork is alleviated, but the rest of our analysis should be no less rigorous.

Footnotes are an obvious place for GE to improve, but it would also do well to be more consistent in its terminology from year to year. Will the terms "GE Store" and "GE Beliefs" be around in next year's report? Or will there be a new initiative that muddles GE's focus or accountability?

Likewise, GE's stylized graphs tend to mask the negative: They separate the year by color, but not the trend, which makes it easy for a reader to overlook the declining 2014 revenue and profits within the transportation segment, for example.

Finally, there's plenty of room for improvement in describing GE's "Key Differentiators." Each of these segments reads like the latest MBA-speak for how GE stands out in a crowded space (think of overused terms like "leveraging" and generic blanket statements about leadership). And the page on GE Capital -- GE's murkiest segment -- still needs some work. Terms like "verticals" and "Basel 1" ratios are not going to roll off the tongue of your average retail investor, which make up 40% of GE shareholders.

The Foolish takeaway
The world of financial reporting could use some innovation, and GE's 10-K facelift takes us a step in the right direction. By working closely with the SEC, GE's finance team was able to jazz up its report and provide better information in a fair and balanced manner. As Foolish individual investors, we can tip our hat to this initiative.

The work's not done, however. The SEC would do well to urge other companies to more clearly disclose their performance, strategy, and pertinent developments in 10-Ks, 10-Qs, and proxies. And GE, meanwhile, has taken the first step to put the information out there for investors. The question now is whether they will use it, and whether the market will see this company in a different light. We'll find out as 2015 unfolds.