Please ensure Javascript is enabled for purposes of website accessibility
Log In Help Join The Motley Fool
Free Article Join Over 1 Million Premium Members And Get More In-Depth Stock Guidance and Research
By Alexander MacLennan – Mar 12, 2015 at 8:04AM

Brazilian aerospace manufacturer Embraer SA (ERJ -1.63%) is facing two major trends. While the aerospace manufacturing industry is booming from higher commercial aircraft sales, the economy in Brazil is falling on tough times, and government practices have become a major issue.

Let's look at how these two trends stack up for Embraer, and whether investors should consider the stock.

Commercial aerospace boom
Thanks to a growth in airline industry profits, carriers now have thousands of total aircraft on order. The larger profits have allowed airlines to fund their fleet modernization programs, causing near-record backlogs at Boeing (BA 2.03%) and Airbus Group (EADSY 2.32%).

While major airlines have tended to focus on the larger aircraft being offered by Boeing and Airbus, makers of smaller aircraft such as Embraer and Bombardier have also seen a boost.

In October, Embraer announced that it to had a record backlog totaling $22.1 billion, and in January, the manufacturer announced that the backlog still stood at $20.9 billion for the end of 2014. Although there is a decline here, it comes from the delivery of 30 commercial aircraft and 52 business jets rather than a wave of cancellations.

Major aircraft orders tend to come at once, and the fact that there didn't happen to be one of these to push the backlog back to a record level in the fourth quarter is not a reason to panic. Investors should still keep an eye on the order book and new developments, but the trend in commercial aircraft orders is currently highly positive.

Brazil and government issues
Although the commercial aircraft industry is looking attractive to investors, the same can't be said about Embraer's home country of Brazil. Disappointing economic data -- combined with unfavorable inflation -- is putting the nation in a place where further interest-rate increases may be necessary, but have the potential to hurt the economy.

At the same time, investors have Brazil's credit rating under watch, and the state-controlled oil company Petrobras is undergoing a massive corruption probe. The problems being unearthed at Petrobras are casting a negative shadow over Brazilian investments as a whole, and the role of the government in the economy. Together, these factors have pushed the Ibovespa, Brazil's main stock index, down nearly 30% over the past five years and down 16% over the past six months..

Embraer is also having issues with the Brazilian government, and is still trying to collect payment for sales to it. Reuters noted that the inability to collect this money contributed to Embraer's negative cash flow for 2014.

Casting a valuation shadow?
The issue of Brazil may be behind Embraer's lower valuation compared to Boeing and Airbus. While Embraer trades at 13.2 times estimated 2015 earnings, Boeing trades at 18.4 and Airbus at 17.2. Of the four major aircraft manufacturers, only Bombardier trades at a lower valuation (7.0 times estimated 2015 earnings), but Bombardier has its own set of issues, having recently announced an equity raise and suspending its dividend.

Despite having a near-record backlog and recently launching a new line of aircraft, Embraer's valuation still trails those of Boeing and Airbus, and the situation in Brazil is a likely culprit.

Exposure to Brazil
While Embraer is a Brazil-based company, its sales are very much worldwide. The following graph shows how Brazil only comprises about one-fifth of Embraer's revenue. 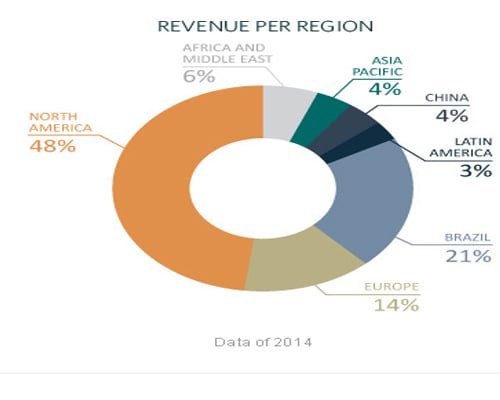 Nearly half of its revenue comes from North America. Here, airlines are looking for regional jets and have been turning to Embraer and Bombardier since Boeing and Airbus have left this area alone.

Embraer also receives a combined 14% of its revenue from Africa, the Middle East, Asia-Pacific, and China. While they comprise a small part of Embraer's current revenue, these are high-growth markets and are likely to see increased demand from airlines in the future.

Going forward, if demand from Brazil trails off, it would be a headwind to the manufacturer; however, a significant presence in other markets will still leave Embraer with most of its revenue.

Takeaway
Embraer shares trade at a discount to those of Boeing and Airbus, probably because of the situation in Brazil. If Brazil continues to feel the pain, it could be a headwind for Embraer because of its 21% exposure to the market, but other markets should keep Embraer going.

I therefore see the current discount as reasonable, given the risk of further troubles in Brazil, but I wouldn't rule this company out for aerospace investors based on that.

Alexander MacLennan has no position in any stocks mentioned. The Motley Fool recommends Embraer-Empresa Brasileira. We Fools may not all hold the same opinions, but we all believe that considering a diverse range of insights makes us better investors. The Motley Fool has a disclosure policy.

Why Embraer Stock Is Up Today
351%