Please ensure Javascript is enabled for purposes of website accessibility
Log In Help Join The Motley Fool
Free Article Join Over 1 Million Premium Members And Get More In-Depth Stock Guidance and Research
By Daniel Miller - Mar 15, 2015 at 10:18AM

There are many solid dividend stocks out there, but for multiple reasons, Ford remains one of my favorites.

Stock prices fluctuate every day; some days are great, and some days make you want to run and hide. Despite these fluctuations in value, companies that offer dividends give shareholders some stability and consistent income. Furthermore, dividends are simply a great tool to help your portfolio consistently build wealth.

Let's take a look at the details of Ford Motor Company's (F -2.44%) dividend, its future prospects, and why the automaker's growth potential could lead to market-beating gains while shareholders reap the rewards as each quarterly dividend check is written.

The benefits of investing in the Blue Oval
Ford pays a quarterly dividend of $0.15 per share, which equates to a 3.8% yield that trounces the dividend offered by its automotive competitors. More important than the dividend itself is the fact that Ford's cash flow in the years ahead will enable consistent increases in the dividend yield, and the company's overall growth story is very appealing.

Looking first at Ford's cash flow, the automaker has spent a massive amount of capital to bring down its enormous pension obligations. Consider that Ford poured $3.4 billion into its pension fund in 2012, another $5.0 billion in 2013, and $1.5 billion last year. That's roughly double what Ford spent paying out dividends over the same time period.

Here's the thing: That's likely to reverse, with more cash being returned to dividends because Ford only needs to pay between $500 million and $1 billion into its pension fund going forward -- Ford's underfunded pension status decreased from $18.7 billion at the end of 2012 down to $9 billion as of the last quarter.

Ford isn't likely to immediately switch gears and rapidly double its dividend payout, but investors are likely to see consistent increases while more cash is also spent to lower Ford's automotive debt. It's not out of the realm of reason to think that Ford's dividend could be double today's amount by the end of 2018.

Ford's dividend is a good story by itself, but the global growth sitting at the automaker's feet also signals a brighter and more profitable future.

Just look at China
Sales have slowed slightly in the world's largest automotive market, but China still accounted for nearly 20 million new-car sales industrywide in 2014. That's far ahead of sales in the U.S., which checked in at just over 16.5 million in 2014. Many industry analysts expect China's sales to continue surging throughout the rest of this decade, pushing toward 30 million units annually by 2020. That potential is huge, and Ford is aggressively pursuing growth in the region. 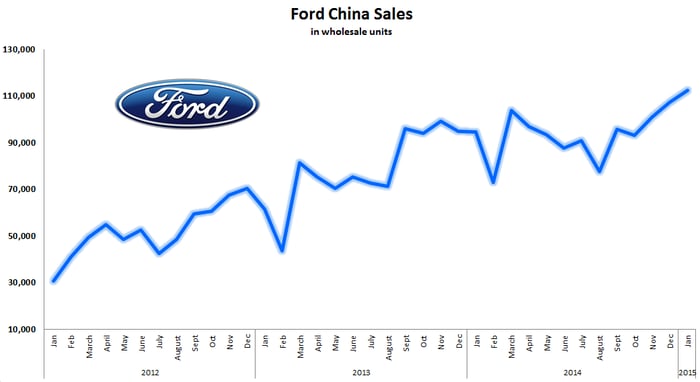 Another very positive factor for Ford investors is that global SUV sales momentum is expected to continue surging through the end of the decade. That's great news for Ford, which has historically been known for producing quality SUV and full-size trucks, because those vehicles generate more top-line revenue and fatter bottom-line profits than smaller vehicles.

Consider that global SUV demand is up 88% since 2008, which makes it the fastest-growing segment around the world, according to IHS Automotive. Ford's utility sales accounted for less than a quarter of its overall sales as recently as 2013, and the automaker projects its utilities will generate 29% of its global sales by 2020 -- a much more profitable sales mix.

Thus far, we've seen the potential of Ford's future dividend and how its global sales will not only increase but become increasingly more profitable. However, as the automotive industry is cyclical, and the next downturn could be around the corner, investors also want to see Ford become more efficient with its production to protect its profitability. Ford has done just that: 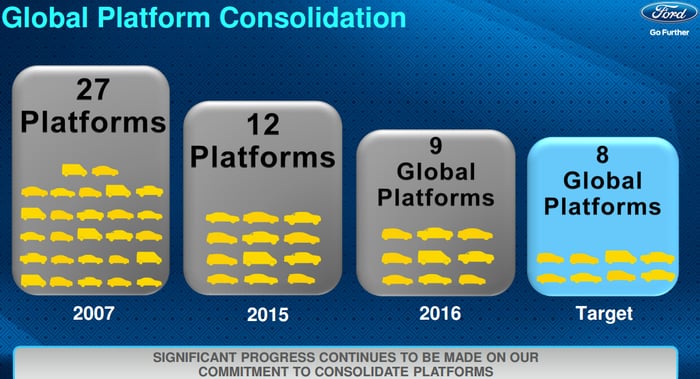 As Ford continues to increase sales from a smaller count of vehicle platforms, the automaker aims to improve its margins over the long term.

There are plenty of great dividend stocks out there, to be sure. However, with Ford increasingly focusing its cash flow on returning value to shareholders, improving its sales growth globally through a more profitable mix, and increasing production efficiency and bringing down costs, the automaker is easily one of my favorite dividend stocks.