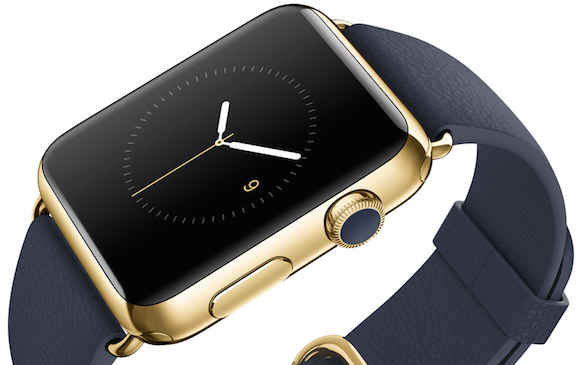 When Apple (NASDAQ:AAPL) steps into a market, it steps in. The latest market that Apple is preparing to jump headfirst into is the nascent smartwatch market. But with Apple Watch Edition, the 18-karat gold models that start at $10,000, that also entails entering the gold commodity market.

Given Apple's sheer global scale when it comes to producing gadgets that consumers line up around the block for, Apple will inevitably become a very large player in the gold market. Apple has long been the single largest buyer of NAND flash memory in the world, so it carries disproportionate weight in that market. Could the same thing be about to happen for Apple in the gold market?

A numbers game
Last month, The Wall Street Journal reported that Apple was preparing to order 1 million Apple Watch Edition units per month during the second quarter. Apple says that each Apple Watch Edition case will weigh between 54 grams and 69 grams.

12 million units is too much
Fellow Fool Adam Levine-Weinberg points out that 1 million units per month is clearly unrealistic when annualized, since 12 million units per year would translate into at least $120 billion in revenue in the first year. That would be compared to the current trailing-12-month revenue base of nearly $200 billion. As much as Apple investors would love to see that type of immediate growth from Apple Watch, it's simply not happening.

Rather, the more likely explanation is that Apple may be ordering 1 million per month only in the second quarter for some early channel fill, and that production rate will decline as it reaches its target range for channel inventory. Apple won't even know what its target range will be until it reaches supply/demand balance.

Additionally, Apple is using a custom alloy utilizing adjusted quantities of silver, copper, and palladium in order to strengthen the metal.

For these reasons, it's difficult to accurately estimate how much gold Apple would actually consume each year. But even using conservative figures -- for example, 5 million Apple Watch Edition units per year using 1 troy ounce each would still require 5% of the world's annual gold production -- Apple will undoubtedly become a major player in the gold market.

Living on the hedge
Gold is a particularly volatile commodity to purchase. Just look at how the spot price of gold has fluctuated over the past year.

Of course, it's not as if Apple just walks into the gold market and pays spot prices. Much like how it procures other components, it will likely utilize a wide range of forward contracts and supplier prepayments as a way to hedge against volatility. But hedging is not without risks, and hedges can become quite costly if you misjudge market movements. Just ask Delta Air Lines about how its fuel hedges performed last quarter. At times, gold can be even more volatile than crude oil.

Apple has already been increasing its hedging activity recently to accommodate for currency volatility, since foreign exchange movements have been hurting profitability in international markets. Adding gold to its hedging strategy isn't a stretch of the imagination.

Just like the NAND flash memory market, Apple will likely soon have a big say in the price of gold.

Apple Watch Could Give Apple Inc. a Heavy Hand in the Gold Market @themotleyfool #stocks $AAPL Next Article
Current