Best workplace awards have always had a bit of a "street cred" problem in the investing world. On one hand, companies earn serious bragging rights -- and recruiting appeal -- by ranking on annual lists like Glassdoor's "Best Places to Work" and Fortune's "Best Companies to Work For." On the other hand, bottom-line-focused investors wonder whether a soft metric like employee satisfaction has any real connection to stock performance.

"With respect to company rankings, we hear, 'Do they mean anything? How does this show up on the bottom line?'" said Dr. Andrew Chamberlain, Glassdoor's chief economist, in an interview with The Motley Fool. Inspired in part by analysis from Motley Fool writers Brian Stoffel and Brian Shaw, Chamberlain and his team dug into Glassdoor's data and created portfolios based on "Best Places" winners. Every one of them strongly outperformed the S&P 500.

"The results definitely surprised me because you never know what you're going to find with data," said Chamberlain, a former University of California San Diego labor economics professor. "This was pretty striking."

Best Places companies consistently outperformed the S&P 500
For the study, Chamberlain and his team created three portfolios of publicly traded companies that appeared on Glassdoor's "Best Places to Work" annual list, which is based entirely on anonymous, verified employee feedback. Each portfolio was examined as an equal-weighted class and as a ratings-weighted class. (You can read the full report and methodology here.) 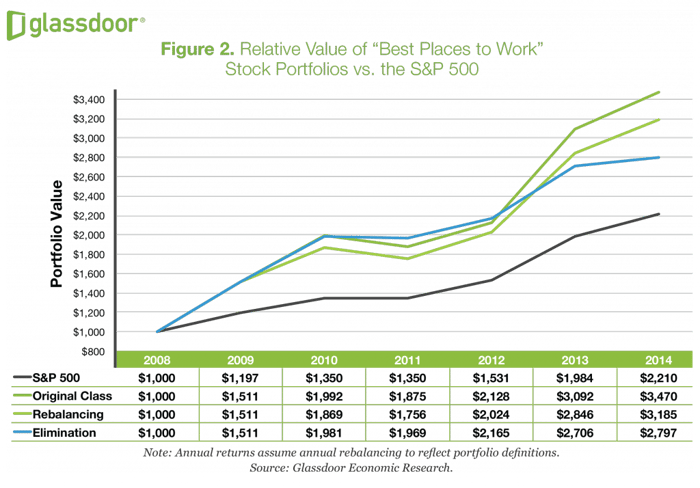 Portfolio 1, the "original class," consisted of the 36 public companies that made the "Best Places to Work" 2009 list in December 2008. The strategy: buy and hold through December 2014. It yielded the best results, with a total return of 236.6% for the equal-weighted basket and 243.3% for the ratings-weighted basket, compared to the S&P 500's return of 121% during the same time.

Portfolio 2, the "rebalancing class," began with the same public winners from the 2009 list and added each year's new winners every January for a portfolio of 32 to 42 companies. Both the equal- and ratings-weighted variations earned close to 218.5% overall.

Portfolio 3, the "elimination class," started as the other portfolios did but annually dropped companies that didn't make the subsequent years' lists, ending with just five stocks: Apple, Google, National Instruments, Qualcomm, and Chevron. This group earned between 174.1% and 179.7% overall.

Glassdoor's analysts also put together a portfolio based on Fortune's "Best Companies to Work For" lists during the same time frame. That portfolio outperformed the S&P 500 by 84.2%

Further bolstering the correlation between employee sentiment and stock performance, a group of 30 low-ranked companies on Glassdoor underperformed the S&P 500 by 32.5 percentage points.

Investment in employees correlates to strong stock performance
Based on the study results, Chamberlain believes employee sentiment should be one of the factors that investors take into account, while noting that the portfolios did experience more volatility than the S&P overall: "If all other factors are equal when you're picking stocks, but one of the companies seems to have a more dissatisfied or satisfied workforce, the evidence points toward the company that has higher ratings. These companies are doing well enough financially to reinvest in company culture."

CEOs ignore this measure at their peril. We find that actively engaged employers who are watching these ratings and making it clear that they're paying attention seem to have better retention and recruiting. Although shareholders are your fiduciary duty, if you don't invest in employees, how will you keep returns high?

Chamberlain readily admits that the relationship between employee ratings and stock price is based on factors that weren't analyzed in detail. However, "the correlation is clear, regardless of the mechanism." He added:

Investing back in employees seems to correlate with good financial performance. Companies who are aiming at shareholder returns need to invest back in company culture, just as they would invest in new software or a website. We can't untangle all of these chicken-and-egg elements, but we can observe the history with stock prices and company culture.

More data studies on the way
Asked whether the study had broken down stock performance by industry, location, or other factors, Chamberlain said no -- at least not yet.

It could easily be done. This is certainly not the last word on the subject. We have a mountain of labor data we're sitting on, and we're just starting to scratch the surface of how our data maps to things in the broader economy.

In the meantime, the data shows "Best Places to Work" winners as potentially winning buy-and-hold investments.