People actually have to put the wearable on for it to work.

Many industry analysts expect the wearables market to be the next big computing platform, but it has yet to take off. Last year, global wearable sales were forecast to reach just $4.5 billion, according to Juniper Research.

Consumers are aware of the technology, but few have expressed interest in actually donning a wearable device. If any company can solve that problem, it is Apple (AAPL -0.14%). That is one reason Juniper expects the Apple Watch to spark sales and help the market grow to $53 billion by 2018. What Samsung and other competitors have failed to address is exactly what Apple has made a point of in its presentations: "Apple Watch is the most personal product we've ever made." 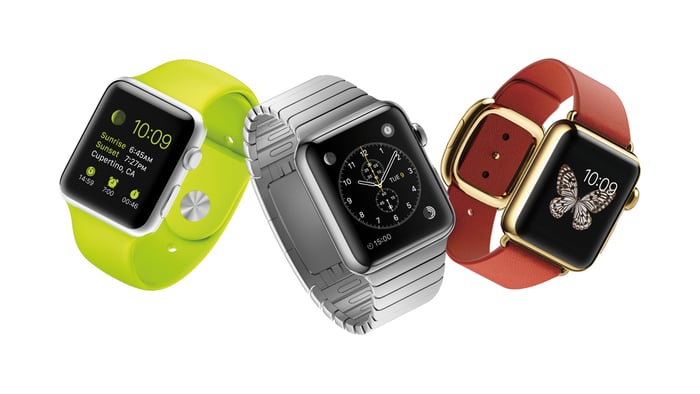 The three different collections of the Apple Watch. Source: Apple

Why people will wear the Apple Watch
To start, the device needs to look good. Apple has designed an attractive smartwatch that can be produced in mass quantities. The company spent a lot of time discussing how the Apple Watch would look when it unveiled the device in September and again at its keynote event earlier this month. From the cover of Vogue to Paris Fashion Week, the company has framed its newest product as a chic fashion accessory.

Beyond the aesthetics, Apple is a luxury brand that people want to show off, particularly in developing markets where the popular iPhone serves as a status symbol for its owners. And that will likely be true of the Apple Watch as well -- particularly the high-end Apple Watch Edition.

Pushing people over the fence
Another advantage Apple has over the competition is its hundreds of retail locations. Intrigued consumers are able to visit the nearest store to try the Apple Watch for themselves, to see how it looks in person.

Shoppers will be able to try on different models and bands, test out some of the features and apps, and ask questions about the device. Experiencing the Watch firsthand will encourage many undecided shoppers to take the plunge, and it is exactly this thinking that has allowed Apple to build the most successful retail locations in the country with leading sales per square foot.

Jump-starting wearables
To be fair, the design of the Apple Watch, the overall brand, and its retail strategy can only do so much to sell people on the idea of wearables. There are limitations to the technology, which stems from a classic dilemma -- people are not going to design products for a market that does not yet exist, but those products are necessary to establish the market. The Apple Watch should fuel significant interest for wearables.

Last month, CEO Tim Cook said the Apple Watch could even replace your car keys. I see this feature as extremely valuable to the wearables market. But for automakers to design cars compatible with wearable devices, people need to start buying them first. The same is true of many smart home appliances that rely on a device that can accurately identify the user and his or her location.

The market needs a jump-start, and Apple will provide it by first focusing on the fashion and looks behind wearables. The functionality will come in later versions, and that is when sales of the device could go parabolic -- not unlike previous Apple products.