Please ensure Javascript is enabled for purposes of website accessibility
Log In Help Join The Motley Fool
Free Article Join Over 1 Million Premium Members And Get More In-Depth Stock Guidance and Research
By Leo Sun - Mar 18, 2015 at 7:45AM

BlackBerry returns to the tablet market with the help of two unlikely allies.

BlackBerry (BB -4.03%) just made a surprising return to the tablet market with the SecuTABLET, a high-security version of Samsung's (NASDAQOTH: SSNLF) Galaxy Tab S 10.5 developed by BlackBerry subsidiary Secusmart, Samsung, and IBM (IBM -0.47%). 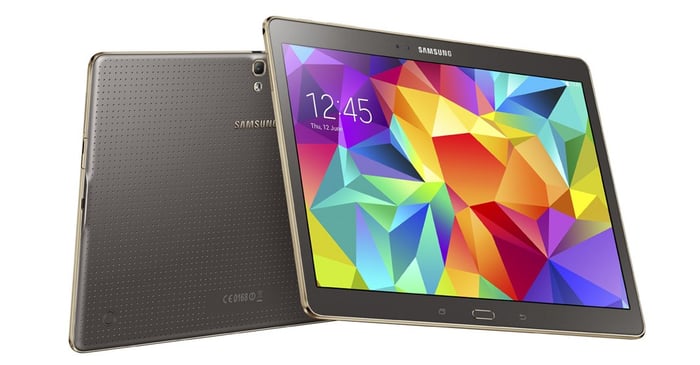 According to BlackBerry, the SecuTABLET can be used for top-level government security purposes but still run public apps like Facebook and Twitter. That promise comes with a whopping price tag of $2,380 -- nearly five times the price of a standard Galaxy Tab S 10.5.

However, the SecuTABLET isn't a consumer-facing device. Instead, it's designed to address the rise of of corporate and government espionage. As companies and countries accuse each other of cyberspying on a regular basis, the market for these airtight tablets could grow. But can that market generate any meaningful revenue for BlackBerry?

Not the first time
Back in 2011, BlackBerry launched the PlayBook in response to Apple's iPad, but the device flopped, shipping less than 2.5 million units in two years. By comparison, Apple sold 90.7 million iPads during 2011 and 2012.

Meanwhile, BlackBerry's global smartphone market share plunged from 20% to less than 1% between 2009 and 2014, according to IDC and Gartner. That decline turned BlackBerry from a mainstream brand into a niche one.

Last quarter, revenue at BlackBerry's hardware and services divisions, which account for 92% of its top line, respectively, fell 24% and 42% annually. To offset those losses, BlackBerry is expanding its fledgling software segment. CEO John Chen believes that the software unit's annual revenue will double from $250 million in fiscal 2015 to $500 million in 2016.

As for hardware, BlackBerry is launching four new smartphones this year, but it's unlikely those placeholder devices can reclaim much market share against Apple and Google.

A new play from a new "playbook"
Mass producing a PlayBook 2, which has been rumored since last year, wouldn't complement Chen's focus on higher margin software. The tablet market also isn't a high-growth one anymore -- IDC reports that global tablet sales only rose 7.2% year over year in 2014, down from 52.5% growth in 2013.

However, a "super tablet" like the SecuTABLET probably shouldn't be categorized with those cheaper media consumption devices. The SecuTABLET is installed with Secusmart's SecuSUITE secure software and networking architecture. It also adds Samsung's KNOX enterprise mobile security solution and IBM's "secure app wrapping technology" which "wraps up" public software before it's run. In other words, it's built to be the "Fort Knox of tablets." Since Samsung manufactures the tablet, the SecuTABLET should be considered a software play for promoting SecuSUITE, instead of a new hardware play for BlackBerry.

BlackBerry will launch the SecuTABLET in Secusmart's home market of Germany. The German government, which recently accused the U.S. and China of cyberspying, could be eager to upgrade the security of its mobile devices.

Focusing on niche markets
At Mobile World Congress this year, BlackBerry declared that it will focus on niche markets which larger manufacturers ignored. At first glance, the SecuTABLET seems to be a niche device, but we should remember that Apple, Google, and Samsung are also creeping into the enterprise device market.

Last year, Apple signed an enterprise partnership with IBM to install industry-specific cloud-based enterprise apps on iPads, which IBM would then sell to clients. BlackBerry is depending on that same kind of support from IBM: Secusmart will sell the SecuTABLET in Germany, while IBM will sell it elsewhere. Speaking to PC World, Secusmart managing director Hans-Christoph Quelle noted that although the SecuTABLET was intended for government use, he hoped that IBM would also sell it to enterprise customers. However, the SecuTABLET's steep price tag will probably make it a tough sell for companies.

Google has also taken big steps toward securing Android by splitting work and personal profiles in Android and Chrome devices. Granted, these devices aren't as bulletproof as BlackBerry's SecuTABLET, but they represent cheap ways for businesses to improve data security across personal devices.

Samsung's KNOX mobile security platform is also widely accepted for government use. Last May, the DOD approved KNOX devices for unclassified communications. However, Samsung should be considered a partner for Google and BlackBerry rather than a direct competitor, since both Android 5.0 and BES include varying degrees of KNOX integration.

The verdict
The SecuTABLET is more of an experiment that an investment. It's a low risk move for BlackBerry, since Secusmart is only selling a limited number of the tablets in Germany. However, it can boost brand awareness for SecuSUITE and help BlackBerry maintain a strong government presence. It probably won't generate much near-term revenue, but it also won't result in disastrous writedowns like the PlayBook.