BlackBerry (NYSE:BB) recently announced the Leap, a new touchscreen smartphone which the company believes will appeal to a younger generation of users. The device will launch in April in Europe for $275 unlocked, while a U.S. release date has yet to be announced.

The Leap has a 5" screen with a 720 x 1280 touch display, an 8MP rear camera, a 1.5Ghz Qualcomm processor, 2GB of RAM, 16GB of internal storage, and a 2800 mAh battery. But compared to other mid-range Android devices, those specs are unimpressive. Other Android devices, like Motorola's Moto G (2014), sport similar specs for under $200, which could make it tough for the Leap to leave a lasting impression. 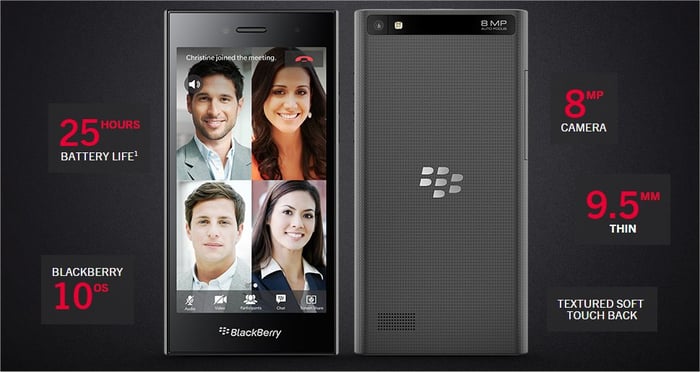 Considering how crowded the mid-range market is today, it's unlikely that the Leap can help BlackBerry, which watched its global smartphone market share plunge from 20% in 2009 to less than 1% today, according to IDC and Gartner. Yet BlackBerry plans to launch three more smartphones this year after the Leap -- a pricey Porsche-designed device (similar to last year's P'9983), another phone with a physical keyboard, and a dual-curved all-touch slider phone. Let's discuss why those devices are doomed, and why BlackBerry should probably stop making smartphones altogether.

CEO John Chen has repeatedly asked investors to focus on its software segment instead, which houses BBM (BlackBerry Messenger), BES (BlackBerry Enterprise Service), and QNX, an embedded OS which dominates the auto market. The segment only accounted for 7% of BlackBerry's revenue last quarter, but Chen believes that it can double its revenue from $250 million at the end of fiscal 2015 to $500 million by the end of fiscal 2016. If that happens, the software division's weight on BlackBerry's top line will rise from 7% to 15%, based on analyst estimates from Thomson Reuters. 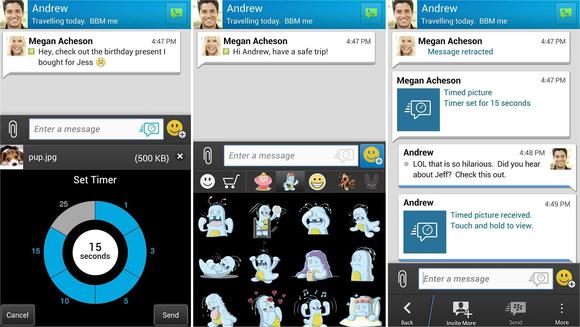 But even if that happens, losses in the hardware and services divisions will likely wipe out any gains made by the fledgling software division.

The writing's on the wall
BlackBerry is desperately launching new devices in a bid to stop the bleeding and give the software division time to catch up. However, developing and launching new devices keeps operating expenses elevated. That seems counterproductive, especially after BlackBerry reduced its operating expenses 73% year-over-year in the first nine months of 2014 by slashing R&D and marketing costs.

Over the past four quarters, BlackBerry sold just 7 million smartphones, missing Chen's original goal of selling 10 million devices annually. By comparison, Apple (NASDAQ:AAPL) sold 74.5 million smartphones last quarter. A recent report from Strategy Analytics claims that during the holiday quarter, Apple swallowed up 89% of smartphone profits worldwide, despite only controlling around a fifth of the market. The same report claimed that BlackBerry and Windows Phone devices claimed 0% of those profits.

Considering that BlackBerry's smartphone market share and profits are nearly non-existent, there's only one reasonable move left -- to sell the smartphone business and invest heavily in the software one.

Potential suitors
Selling the businesses that account for 92% of its top line might seem ludicrous, but the cash generated from that sale could breathe new life into BlackBerry's software division.

In January, Samsung (NASDAQOTH: SSNLF) was reportedly interested in acquiring all of BlackBerry for $7.5 billion. Buying BlackBerry would have given Samsung a firmer foothold in the enterprise market, and could help it distance itself from Google's (NASDAQ:GOOG) (NASDAQ:GOOGL) Android ecosystem.

Google, which is trying to expand its enterprise footprint with Chromebooks for Work, Android for Work, and new BYOD security features for Lollipop devices, would also benefit from acquiring BlackBerry. Microsoft (NASDAQ:MSFT) is also sometimes mentioned as a potential suitor, since buying other struggling smartphone competitors (as it did with Nokia's handset division) could strengthen its mobile presence.

BlackBerry's future
In the first nine months of 2014, BlackBerry's revenue plunged 54% year-over-year to $2.68 billion. During that period, the software division's top line only slipped 7% to $167 million. If BlackBerry spins off or sells the smartphone and services divisions, it can pour all that cash back into improving BBM, BES, and QNX.

Unfortunately, BlackBerry plans to launch more smartphones which could be easily trampled by mid-range Android devices. In my opinion, the inevitable failure of those devices will weigh down BlackBerry's bottom line while diminishing the appeal of the BlackBerry brand among potential suitors.