Please ensure Javascript is enabled for purposes of website accessibility
Log In Help Join The Motley Fool
Free Article Join Over 1 Million Premium Members And Get More In-Depth Stock Guidance and Research
By Timothy Green - Mar 20, 2015 at 9:20AM

Salesforce posted rapid deferred revenue growth when it last reported earnings, but there's a problem that investors need to know about.

In the world of software-as-as-service, deferred revenue is often used to predict future revenue. A SaaS company takes a payment from a customer up front, delivering the service over the length of the contract while recognizing the revenue from the contract along the way. Any revenue yet to be recognized shows up as a deferred revenue liability on the balance sheet.

Further down the press release, Salesforce guided for revenue growth of just 20%-21% for the next fiscal year. If the deferred revenue balance was sitting 32% higher than at the end of fiscal 2014, how on Earth is revenue going to grow so much slower? Essentially all of that deferred revenue will be realized as revenue over the next year. Is Salesforce expecting a major slowdown in acquiring new customers?

Of course, as Salesforce gets bigger, the revenue growth percentage is bound to slow. But there's something else happening here that is important for investors in SaaS companies to understand. Deferred revenue growth, while sometimes a decent indicator of future revenue growth, has a major flaw that can mislead investors into believing a company is growing faster than is the case.

The illusion of growth
If I told you a certain SaaS company increased its deferred revenue by 30% last year, you would probably assume it was a fast-growing company. To illustrate why that's not necessarily the case, let's introduce a fictional SaaS company. I'll call it HypeSaaS

HypeSaaS has run into a problem -- revenue has stagnated at $100 million per year. Try as it might, the company can't seem to grow its business, and it expects revenue to be flat for the foreseeable future. All of HypeSaaS's customers are invoiced quarterly, and they all pay on the last day of each quarter.

The CEO of HypeSaaS decides to move away from quarterly invoicing, instead pushing customers to pay for a full year of service in advance. Over the next 10 years, HypeSaaS gradually shifts its customer base to annual payments. Annual revenue remains flat at $100 million during the entire period, as the business doesn't fundamentally change. 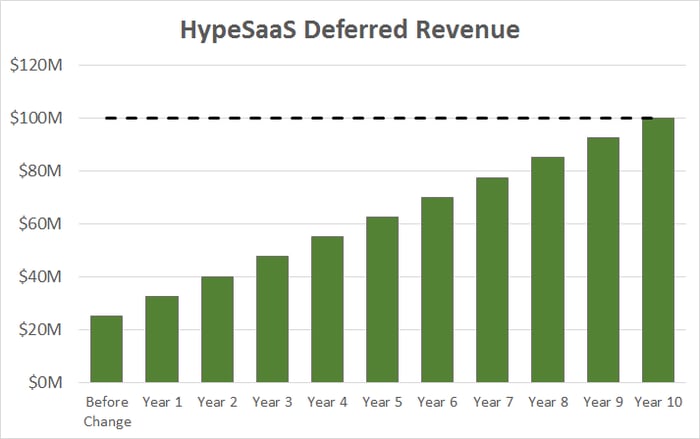 If you looked at only HypeSaaS's deferred revenue, you would see a company that appeared to be securing an increasing amount of business each year. But in reality the gradual lengthening of the average invoice period is the only reason deferred revenue was growing at all. A SaaS company's deferred revenue is highly sensitive to the timing of customer payments.

Back to Salesforce
HypeSaaS is an extreme example, but a portion of Salesforce's deferred revenue growth can be attributed to a lengthening of invoice periods. In fiscal 2014, 74% of its invoices were issued with annual terms, with most of the rest coming with quarterly terms and a small number coming with multiyear terms. In fiscal 2015, this percentage of annual terms rose to 80%.

Prior to fiscal 2014, Salesforce didn't disclose this percentage, but we can still extract some information. In the HypeSaaS example, all deferred revenue was current, meaning it would be recognized as revenue over the following year. This current deferred revenue as a percentage of the revenue recorded during the following year is an important number to watch. If it grows, that means invoice lengths were being increased. In HypeSaaS's case, this number grew from 25% to 100% over 10 years.

For Salesforce, the vast majority of deferred revenue is current, so we can do the same analysis. Here's how this has percentage changed:

*Fiscal 2016 revenue based on high end of guidance. Source: Salesforce.

For Salesforce, perpetually profitless on a generally accepted accounting principles basis and trading at about eight times sales, the difference between 21% growth and 32% growth is important. The market should be focusing on real future revenue growth, not deferred revenue growth, when judging the company's prospects.

Timothy Green has no position in any stocks mentioned. The Motley Fool recommends Apple and Salesforce.com. The Motley Fool owns shares of Apple. Try any of our Foolish newsletter services free for 30 days. We Fools may not all hold the same opinions, but we all believe that considering a diverse range of insights makes us better investors. The Motley Fool has a disclosure policy.