Investors don't often get a sneak peek into our energy future. Corporations like to reserve the right to mix and match energy sources as needed, and each company's portfolio is a cleverly concocted secret recipe of comparative advantages.

For 2015, wind is the clear front runner. Worldwide, wind energy capacity clocks in at approximately 370,000 MW, around 12 times the amount some experts predicted a decade and a half ago. In the United States, wind is expected to account for a sizable 5% of all electricity generation in 2016, and 2015's additions should help to reach that goal. R&D leaders like General Electric Company (NYSE:GE) have dramatically expanded wind opportunities in recent years, and powerhouse utilities like NextEra Energy Inc (NYSE:NEE) have ensured that those advancements make their way into the grid -- to the tune of 11,300 MW spread across 107 wind farms.

A natural pair
But wind wouldn't be gearing up for a great year if it wasn't for natural gas. Despite improvements in energy storage technology, natural gas is a necessary complement to wind power to ensure power supplies meet demand during peak hours and when the wind isn't blowing. It should come as little surprise, then, that Texas will claim 27% of all 2015 natural gas capacity additions -- double that of any other state. Texas snagged around 10% of its electricity from wind power in 2014 and produced more than double the wind power of any other state in 2013.

Texas is hedging its bets with natural gas, but so are General Electric Company and NextEra Energy. General Electric has been an industrial innovator for decades and decades, but its recent Ecomagination green energy investment arm pairs up wind and natural gas research like never before. Just over a year ago, the company announced an extra $10 billion alongside its original $15 billion R&D pot to spur more environmentally friendly energy generation. Coupling wind and natural gas (and not disclosing separate investment amounts) allows General Electric Company to flex to energy generation demands while collectively advancing the paired power sources.

NextEra Energy is making pairing moves of its own. After making its first natural gas investment in 2008, the utility currently lays claim to 4,700 MW of generation capacity spread across seven plants in five states. The company is also expanding beyond generation and has a $3 billion Florida natural gas pipeline in the works with joint venture partner Spectra Energy set to come into operation in 2017. 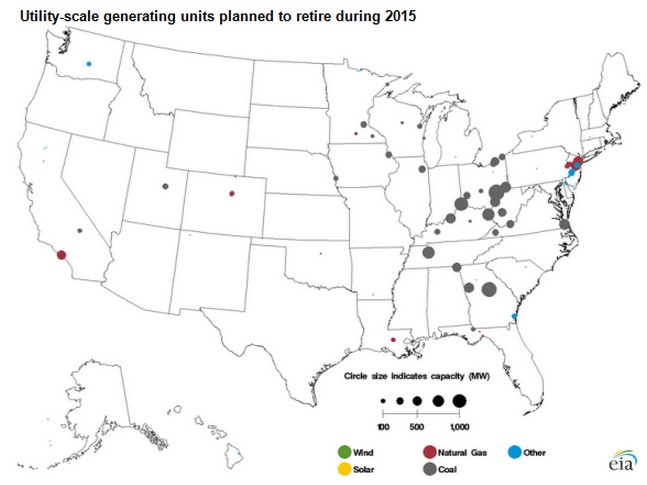 The United States is increasing its total electricity supply for 2015, but not by much. As we load up on wind and natural gas, we're cutting coal like never before. Nearly 13,000 MW are slotted for retirement in 2015, primarily because of new environmental air quality regulations.

While the retirements are mostly spread across smaller coal-fired generation plants with smaller capacities, not everyone is taking the cut kindly. In a press release issued last week, Southern Company (NYSE:SO) noted that its 120 MW Gadsden Plant in Alabama will have to switch from a combination of coal and natural gas to entirely natural gas to accommodate the new regulations.

According to Southern Company, it's spent around $3 billion over the last decade to follow environmental regulations, and there may be more to come. Despite investments elsewhere, the utility still relies on coal for 38% of its 45,500 MW of generating capacity.

Invest in the future
American energy isn't the safe investment it once was. From erratic oil prices to expensive environmental regulation, investors need to keep a close watch on their energy investments. This chart gives us a sneak peek into trends for 2015 and beyond, and investors would be wise to consider its implications for their own power-filled portfolios.