Dividend checks add up to a lot of cash over time.

Dividend stocks are a great way for risk-averse investors to invest, as they have been shown to be less volatile than the broader market, making it easier for you to stick with them. Also, with dividend stocks, you receive dividends each quarter, giving you cash to reinvest as opportunities pop up.

With volatility creeping back into the market, we asked three Motley Fool contributors what they think are safe dividend stocks for risk-averse investors. Here's what they had to say:

Processed food companies have been having trouble as consumers gravitate away from processed and packaged foods and toward organic foods, fresh fruits and vegetables, and fast-casual dining. Campbell Soup is no different, with revenue in the most recent quarter dropping 2% year over year, and earnings dropping 11% as margins declined.

Campbell Soup, though, is proactively taking steps to counter the challenges to its business. Last year, the company bought Bolthouse Farms, Plum Organics, and Kelsen to expand its offerings in the organic soups and packaged fresh food businesses as well as give the company more access to emerging markets.

While consumer tastes are changing, Campbell Soup's cash flow is not. The company had free cash flow of $750 million the past 12 months and pays out just over 50% of that as dividends to shareholders. The soup giant has paid a dividend for nearly 30 years and currently has a forward yield of 2.75%. The company had regularly increased its dividend, but it took a break last year to conserve its cash as it made acquisitions.

Whether or not Campbell Soup starts growing quickly again, people are not going to stop eating soup, which is essentially synonymous with Campbell's in many people's minds. You can be assured that Campbell Soup's dividend is safe and has room to grow.

Dan Caplinger: If you're looking for a dividend stock you can count on to keep paying you increasing amounts of income every year, then it's hard to do better than Procter & Gamble (NYSE:PG). For 58 straight years, the consumer-goods giant has increased its dividend payout to shareholders, and it's far from stingy with its payments, currently yielding more than 3%.

Procter & Gamble also has an enviable arsenal of products backing up its dividend payments, with the consumer products king having two dozen billion-dollar brands. You'll find its products not just in the U.S., but in billions of households across the planet, and despite having seen some challenges to its growth in recent years, emerging markets in which a rising consumer class is just starting to establish itself have helped give P&G the growth opportunities it needs in order to keep strengthening its financial condition.

The only slight downside to P&G right now is a fairly pricey valuation, with its current earnings multiple of about 25 based on trailing profits reflecting the premium value that investors are putting on dividend stocks. Nevertheless, with its solid recession-resistant business model, Procter & Gamble remains a good long-term choice for those who are bullish on global consumer growth.

Jason Hall: As Dan Dzombak pointed out with Campbell Soup, many stalwarts in the packaged food business have been feeling the pinch of consumer sentiment shifting toward "better for you" and organic packaged foods. My pick for risk-averse investors -- General Mills (NYSE:GIS) -- is not removed from this, either, but the company isn't standing still.

General Mills is taking steps to strengthen its product line-up in the face of changing tastes, with acquisitions in recent years including Annie's, Food Should Taste Good, and international expansion with Yoplait and the acquisition of a popular Brazilian food maker in 2012.

Most importantly for long-term and risk-averse investors, consumer goods companies like General Mills are much less susceptible to the impact of recessions that can wreck the stock market.

During the dot-com bubble: 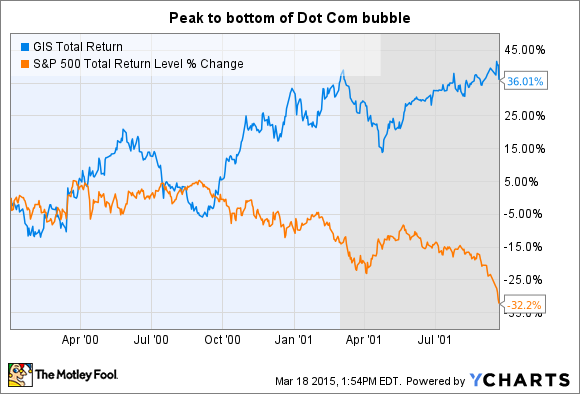 During the recent financial crisis: 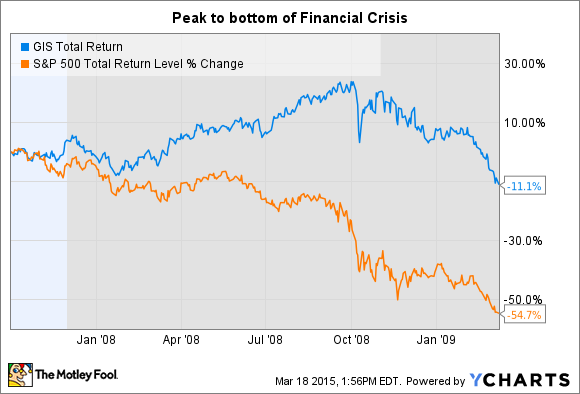 General Mills' stock wasn't as heavily affected as the S&P 500 during recent downturns -- largely because, frankly, people still have to eat. With a solid management team that practices conservative capital management, General Mills is a great bet if you're looking to minimize your risk.

The dividend? How about 116 years and counting, uninterrupted and never reduced. Actually, it's been increased almost every year for the past few decades.