Linn Energy LLC (OTC:LINEQ) announced today that it has formed a strategic acquisition alliance with private equity firm Quantum Energy Partners, which was a founding investor in Linn. The deal creates AcqCo, which is an acquisition vehicle that Quantum is seeding with a billion dollar equity commitment. Linn will manage the entity and can take a 15%-50% working interest in assets acquired by the alliance. It in essence provides the company with the ability to acquire $2.5 billion in oil and gas assets without putting up anywhere near that amount of its own capital.

In sealing a deal to create AcqCo, Linn Energy has now completed its initial round of private capital accumulation to fund both drilling and acquisitions during the current period of market turmoil. The $1 billion initial equity commitment to create AcqCo gives Linn Energy the war chest it was seeking as it looks to take advantage of the current market conditions to acquire oil and gas assets without having to tap the high cost debt and equity markets at the low point in the market.

As the following slide shows, AcqCo is a unique structure that provides a lot of flexibility for Linn. 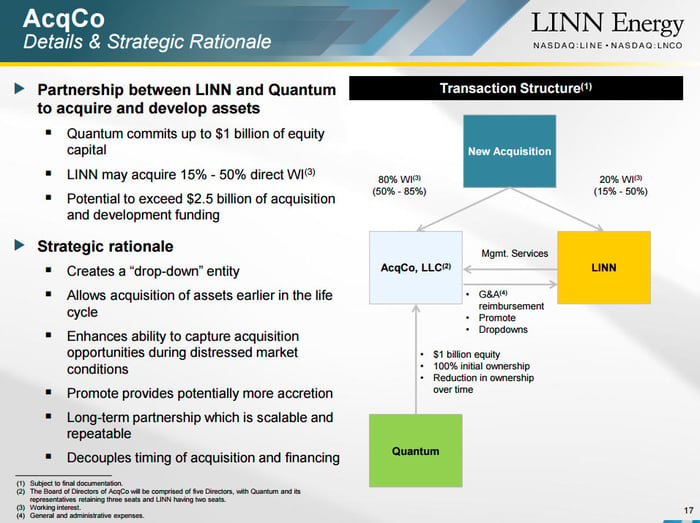 It gives Linn a billion dollar equity checkbook to go on the offensive and make acquisitions. The company can then leverage that $1 billion in equity by acquiring a 15%-50% direct working interest in the acquired assets, while boosting the entity's leverage even further by using debt that won't be on LINN's balance sheet. Add it all up and the total initial size of AcqCo is upwards of $2.5 billion, and if all goes well Quantum could pump more equity capital into the entity to boost the ultimate size of the alliance for future deals.

Why it's a good deal for Linn's investors
The AcqCo deal provides three very important strategic benefits for Linn.

One problem Linn has had over the years is timing the debt and equity markets when it makes an acquisition. This is one reason why the company has $1.8 billion drawn on its $4.5 billion credit facility with another $1.2 billion drawn on Berry Petroleum's $1.4 billion facility. The company just hasn't found the public bond market amicable to term out this debt. Further, the equity market has been unkind to Linn, as the downturn in the oil market sent its units down 65% from their 52-week high, leaving Linn hesitant to use its undervalued equity to make a deal. So, by giving Linn the freedom to acquire without the risk that it won't be able to pay for the deal on fair terms, it eliminates much of the funding risk that could have hampered future growth.

In addition to helping eliminate the funding risk, the deal also provides Linn's investors with visible acquisition-driven growth. For example, let's say AcqCo buys an oil asset in the near future for a billion dollars and Linn invests $150 million in the deal for a 15% working interest. If the deal performs as expected, Linn can earn a promoted interest in the asset for no additional capital. Further, once AcqCo decides to divest the asset Linn is given rights of first refusal to acquire it in a drop down deal. That gives Linn's investors much more visibility into future acquisition-driven growth than the company's previous model, where deals were rather lumpy.

Finally, the deal enables Linn to buy assets that might not fit its MLP structure at first. For example, the company spent much of 2014 shedding its high decline horizontal assets in the Permian Basin and Mid-Continent. However, these are the types of assets that AcqCo could look to acquire, nurture, and then sell down to Linn once the decline rate levels off in a few years.

Investor takeaway
The creation of AcqCo is the final step in Linn's transformation process over the past two years. The company has been working feverishly to reduce its capital risks. Step one was to reshuffle its portfolio and replace capital-intense assets with those with lower decline rates, meaning those that needed less capital to maintain production. Now the company has completed its search for private capital to fund its growth. This makes Linn much less reliant on the fickle public capital markets -- not just to fund its internal development, but also its external growth driven by acquisitions, enabling it to take unimpeded advantage of the current downturn in the oil market.