Take a company with seemingly limitless potential, but almost no revenue coming in to speak of, and you have the perfect recipe for volatility. That's the case with Organovo (NASDAQ:ONVO), a 3-D bioprinting company making fully functioning human tissues for pharmaceutical companies to test their treatments on.

Between November 2012 and November 2013, Organovo stock shot up 500% -- largely on the exciting potential opportunities the company is pursuing, and combined with the general craze for all things related to 3-D printing at the time. Since then, however, the stock has lost over 70% of its value.

So, is the stock destined to be a winner, or is it a whole lot of hype about nothing? Read on to get the view from 30,000 feet for both sides of the argument.

Start-up biotechnology companies are infamously dangerous investments. While some go on to do great things for both the medical community and investors, there are countless others that simply fail to gain traction and either get sold out, or declare bankruptcy.

Many bearish investors believe that while Organovo has a good story, the company's actual product isn't all that special, and its stock -- even after falling 70% -- is overpriced. This is evidenced by the relatively high 23% short interest in Organovo's stock.

The biggest argument against the company's sole marketable product -- the exVive 3D Human Liver Tissue -- is that it is not substantially different than any of the other 2-D or 3-D liver assays available on the market right now. Competition producing similar products already exists, particularly Insphero AG, a private Swiss company.

As far as the stock itself is concerned, today's price of $4 per share represents a market capitalization of roughly $325 million. That's a very heady valuation for a company that has brought in just $419,000 in revenue over the past 12 months, has only $50 million in cash on hand, and has just made it clear that it will be making secondary offerings on the stock market -- further diluting current shareholders.

Bulls: This is the price you pay for revolutionary technology
Those who believe in the company's technology are quick to point out that it's not fair to judge Organovo's stock based on any type of revenue the company has gotten over the last 12 months. That's because the company's first and only product has barely had any time on the market. Organovo CEO Keith Murphy has made it clear that revenue from liver assays won't be reported until the company releases second-quarter results later on this year.

As far as the quality of Organovo's liver assays go, bulls contend there aren't any other products on the market that can mimic native behaviors for over 40 days (Insphero's last 35 days) available for drug companies to use. Management backs this sentiment: "Based on the data achieved to date with 3D Bioprinted tissues such as our exVive3D Human Liver, we see performance that has, to our knowledge, never been achieved previously."

Furthermore, bulls argue, liver assays are just the beginning. The company plans to make assays available for many other tissue types, as well as disease models for drug companies. As an example of progress on that front, Organovo recently released data showing that its next product -- 3D kidney tissues -- is coming along ahead of schedule.

Who is right?
There are two important things to take into consideration when determining if Organovo has really lived up to the hype or not. The first is that the company has already said that, unlike pharmaceutical launches, revenue for liver assays (and all further products) will have an adoption curve that takes far more time to reach saturation. 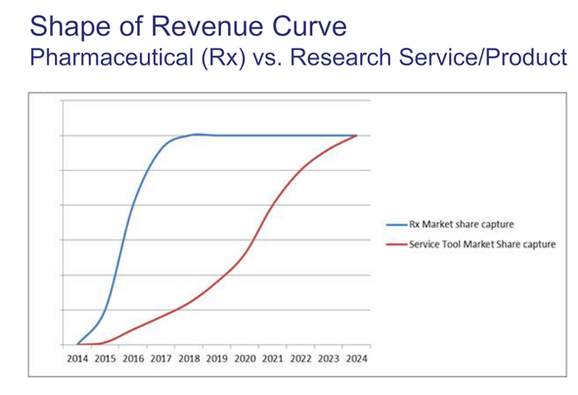 This means it won't be until the end of 2016 that we have a clear picture as to how the exVive Human Liver Tissues have performed. But that may not be the case with future tissues released by the company -- which bring us to the second important factor to consider.

Murphy recently announced that Organovo would be fundamentally changing its business model in the coming years. It will be a three-pronged approach. First, Murphy wants revenue from existing tissue models to ramp up faster. Second, Organovo wants to develop some of its own drug candidates -- an ambitious goal, to put it lightly. And third, he thinks the company can draw even more revenue to improve and monetize its Novogen MMX Bioprinter.

Spearheading these initiatives was the reason Murphy gave for investors to expect share dilution in the not-so-distant future. For short-term investors, it's highly unlikely any of these initiatives will come to fruition within the next two or three years.

Barring the company being bought out -- or going bankrupt -- I would say it might be five to seven years before we can really get a handle on whether or not Organovo has lived up to its purported potential.

That's why I think investors who want to own a piece of the company should take an approach similar to what I'm doing. I currently own shares, but knowing they are highly volatile and that the company is very speculative, they make up less than 1% of my overall holdings.