It wasn't long ago when the mid-size sedan segment, historically dominated by Japanese automakers, was filled with high-quality but bland and boring designs. Then, Ford Motor Company's (NYSE:F) Fusion shook things up, surging up the sales ranks quickly. When the Fusion hit showrooms, things changed for the mid-size sedan segment, and now, if the vehicle doesn't look $5,000 to $10,000 more expensive than it is, it's going to struggle against the competition.

On the other side of town, Ford's rival General Motors (NYSE:GM) is hoping to bring its A-game with the Malibu in hopes of sending its sales surging, just as the Fusion did years ago. The good news for GM investors is that the positive hype around the vehicle at last week's New York's auto show was a great sign. Even better than its new design is that investors can expect a more significant impact on GM's bottom line.

How the industry looks
Here's a look at how the Fusion quickly gained ground on Toyota's Camry, the segment's longtime leader in sales, and how the Malibu has been treading water. 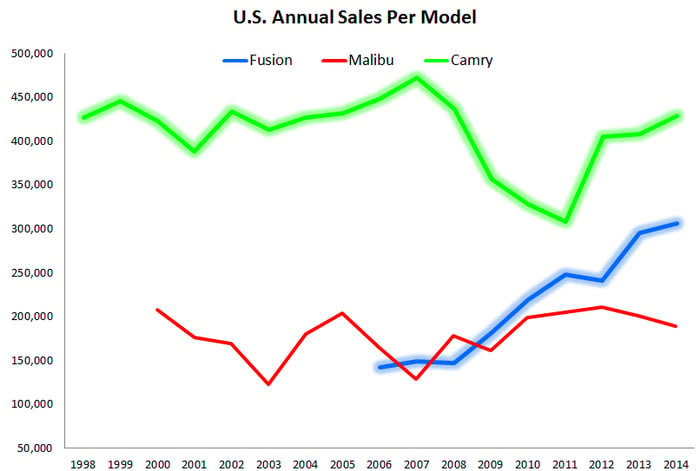 Now, GM hopes to revitalize its Malibu much the same way it did with its Impala, which was the first American vehicle to take home first place in Consumer Reports' large-sedan rankings in two decades.

"If you're going to beat the champ, you can't just win on split decision," said Steve Hurley, owner of Stingray Chevrolet near Tampa, according to Reuters. "You've got to knock him out. That's what the Malibu has to do."

In an attempt to deliver a knockout blow, GM's Malibu has to impress in many different facets of the vehicle.

One part of that will certainly include that the Malibu will be built on a new global platform that's roughly 300 pounds lighter, which means it moves from one of the heaviest in the segment to one of the lightest. In fact, in part because of the lighter weight, GM engineers say the 2016 Malibu will handle better than the more expensive Buick Regal, which recently won Consumer Reports' top honors for the sports sedan segment.

Further, beyond the Malibu's improved handling, it's getting some new powertrain options. The Malibu's base engine is downsized for the 2016 model, with a 1.5-liter turbocharged option that gets 37 miles per gallon on the highway.

In addition to the improved performance of the Malibu, the biggest challenge facing the struggling sedan was its exterior appearance. In an attempt to look more aggressive, expensive, and sophisticated, GM went to the drawing board and may have come out with a real winner.

"The roofline has been stretched rearward, giving a more sleek profile, while the front wheels have moved forward and front and rear overhangs have been reduced," GM global design chief Ed Welburn said in a press release. "Along with the sculpted body side, these cues help Malibu appear more dynamic and sophisticated."

It appears the 2016 Malibu will definitely contend with the segment leaders, but what does that mean for investors if it is indeed successful?

Sales and profitability?
The word on the street is that GM has told suppliers to prepare for sales in its North America region, which is mostly the U.S., to increase 25% to near 250,000 units. Reuters even reports that some suppliers were told the potential could reach 300,000. While that isn't a forecast, it speaks to the confidence GM has that its 2016 Malibu will be very competitive.

Perhaps the most striking figure I've seen was that GM officials expect the new Malibu to deliver up to $1,500 more profit per car than the outgoing model, which is absolutely huge. Even using 2014's sales figures, that would mean nearly $285 million in additional profit, which is enough to move GM's bottom-line profitability needle on a quarterly basis -- consider that GM generated $2.8 billion in net income last year. For the record, that $2.8 billion was crippled because of nearly $3 billion in recall costs and another $1 billion in restructuring costs.

The mid-size sedan segment is a tough segment to compete in, but being successful in that segment is a big winner for sales volume and brand image. The Malibu, as illustrated previously, is also aimed to help significantly boost profits and margins on GM's passenger cars -- that's more important than investors realize, as GM has historically relied heavily on full-size trucks and SUVs for the majority of profits.

Ultimately, the 2016 Chevy Malibu is going to be a big deal for GM and its investors, and investors would be wise to watch how it fares when it hits dealerships in the fourth quarter of 2015.