Savings bonds are one of the world's safest investments. Backed by the full faith of the U.S. Government, savings bonds offer a safe place to build savings for the long-term at the cost of a relatively low investment return.

There are two types of savings bonds issued by the U.S. government today. Here's how they work. 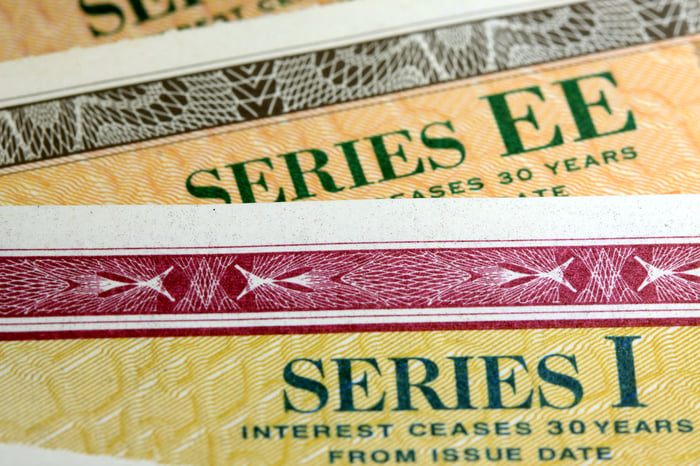 Series EE bonds
Series EE bonds are the most common type of savings bond. They're purchased at a discount to their face value, and accrue interest monthly based on a fixed rate at the time they are issued. The bonds mature after 20 years, at which point the U.S. Treasury will guarantee that investors have doubled their money.

Potential returns
Currently, savings bonds provide a tiny return -- Series EE bonds issued from Nov. 1, 2014 to April 30, 2015 pay an annual rate of just 0.1%. However, if you hold the bond to its 20-year maturity, your return will jump considerably to a compounded rate of return of roughly 3.5% per year. This is because the U.S. Treasury guarantees that an investment in a Series EE bond will double in value after 20 years. 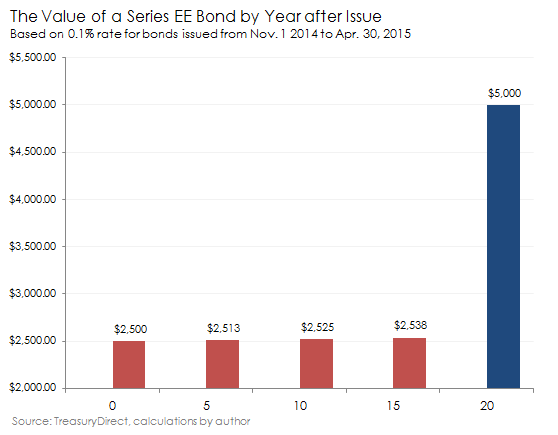 This is best explained graphically. A Series EE bond purchased for $2,500 at the time of writing would be worth only $2,538 after 15 years. However, at maturity in year 20, the bond would be redeemable for $5,000. Thus, savings bonds purchased in a low-interest rate environment provide the best return when held to maturity, to take advantage of the minimum guaranteed return.

Series I bonds issued since the 2008 financial crisis have most frequently paid a fixed rate of 0%. (A handful paid fixed rates from 0.1% to 0.3%). However, as inflation has been positive in all but one six-month period since then, the bonds have earned a return significantly higher than their fixed rate of 0%. A bond issued for $50 in June 2008 with a fixed rate of 0% would be worth $58.60 as of April 2015, thanks to the return, which was solely the rate of inflation.

Unlike Series EE bonds, Series I bonds are not guaranteed to double in value by their maturity date, which occurs 30 years after the bond is issued. This makes for an important trade-off. If you expect high inflation, a Series I bond would be a better investment. However, if you expect low inflation, a Series EE bond would be a better investment if held to maturity.

A worthy investment?
In general, savings bonds are probably best compared to a savings vehicle like certificates of deposits or savings accounts, as they aren't investments in any true form. To get a good return, a Series EE bond must be held to maturity -- a period of 20 years. If you can afford to tie up your money for 20 years, stocks may be a better investment. There are no guarantees, but a diversified portfolio of stocks (like the S&P 500 index) has historically generated a positive return in every 20 year period.

Series I bonds are more interesting from an investing perspective, because they offer a direct hedge against inflation and do not need to be held to maturity for the best return. Consider Series I bonds as an alternative to 5-year certificate of deposits, which do not have inflation protection and offer yields that are similar to Series I bonds. Either way, with purchases limited to $25,000 per year (direct purchases plus tax refunds exchanged for savings bonds), it's unlikely that savings bonds could or should ever be a major part of your net worth.

How Do Savings Bonds Work? @themotleyfool #stocks Next Article
Current