Jason Hall and Matthew DiLallo
(TMFVelvetHammer)
Author Bio
Born and raised in the Deep South of Georgia, Jason now calls Southern California home. A Fool since 2006, he began contributing to Fool.com in 2012. Trying to invest better? Like learning about companies with great (or really bad) stories? Jason can usually be found there, cutting through the noise and trying to get to the heart of the story. Follow @TMFVelvetHammer

"Buy when there's blood in the streets." --attributed to Baron Rothschild

Over the past year, the huge drop in oil prices has devastated the stocks of dozens of companies, and frankly a handful of them may not survive the current cheap-oil environment. However, eventually the market will correct, and when it does, there will be huge opportunity for patient investors to make huge returns. With that in mind, I've been watching LINN Energy (OTC:LINEQ) and sister company LinnCo (NASDAQ: LNCO) closely over the past several months, and I think it's time to buy.

However, I'm not completely convinced, so I reached out to a fellow Fool, Matt DiLallo, who has studied LINN far longer than me, to get his thoughts. Here's our conversation, edited for clarity and length.

Jason Hall: So, I know you own shares of LINN, Matt, and I've seen just how far they've fallen. Tell me what's happened to bring shares so low? 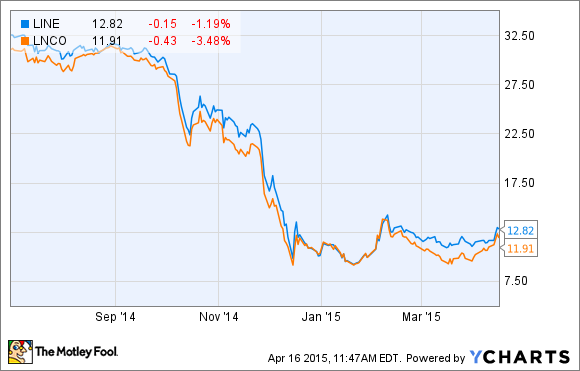 Matt Dilallo: LINN's shellacking has been largely fueled by fear. Investors are afraid of the enormous pile of debt it amassed as it bought oil and gas assets over the past few years. Debt, in a weak oil price environment, is a real weight and it's why we've seen a lot of oil stocks fall 50%-plus, while others like Exxon and Chevron are only down single digits. In LINN's case its net debt has been as much, if not more, than these big oil behemoths despite the fact it's only a fraction of their size. We can see that in the chart below as LINN has over $10 billion in net debt, which was more than both Chevron and Exxon had in 2013. 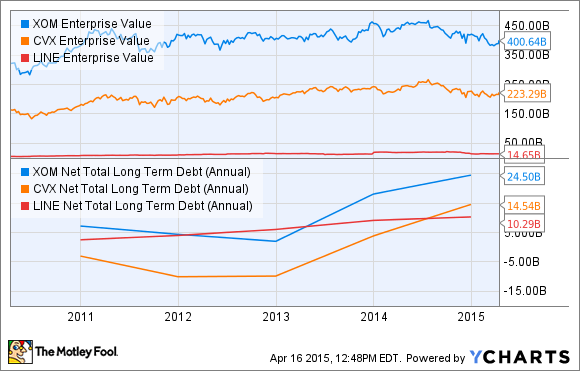 That leverage cuts both ways as it helped LINN grow faster during the boom years, but is a weight now that times are tough.

JH: It seems the biggest risk to LINN remains cheap oil, but it's not that simple because of the company's hedging program, right? How much insulation does that give the company?

JH: I know the distribution (dividend) is an important part of LINN's story. It's already been slashed, a big reason the stock has fallen as far as it has. How exposed is the current dividend?

MD: It all depends. One of the big risks in the energy market is that oil prices don't meaningfully improve in the next year. That's not so much of an issue for LINN because of its hedges, but it is an issue for a lot of other oil companies that have weaker hedges in place. So, while 90% and 87% of Linn's cash flow is hedge for the next two years, those numbers are just 44% and 13% for the average oil company, many of which have much weaker balance sheets than LINN. Worst case scenario is that we see a wave of bankruptcies hit the energy sector, freaking investors out and forcing LINN to cut, or even eliminate, its payout again to preserve cash.

MD: The best reason to buy is because of the fact that the oil market is cyclical, and we look to be at the bottom of the down cycle. LINN sees this as an opportunity, which is why it just raised $1.5 billion in private capital so that it can go on the offensive. A smart deal at the bottom of the cycle could pay big dividends down the road.

That said, this time could very well be different and the downturn could last for more than just a year. It's not beyond the realm of possibilities that a 1980s style oil bust is in the cards.

JH: Let's cut to the chase. What do you think the best thing to do now is? Is this a Buffett-esque "greedy when others are fearful" opportunity with LINN and LinnCo, or is it too early to make that call?

MD: While I'm not going to pound the table on LINN, (I've already ingested too much crow on this one as it is), I do see more upside than downside. Despite its debt LINN has plenty of liquidity and the recent capital infusion puts it in a position to go on the offensive. On top of that, oil prices have stabilized as supply growth is moderating and demand for oil is starting to pick up. That doesn't mean we're out of the woods yet, but I don't think the oil industry, or LINN Energy, are heading for the grave.